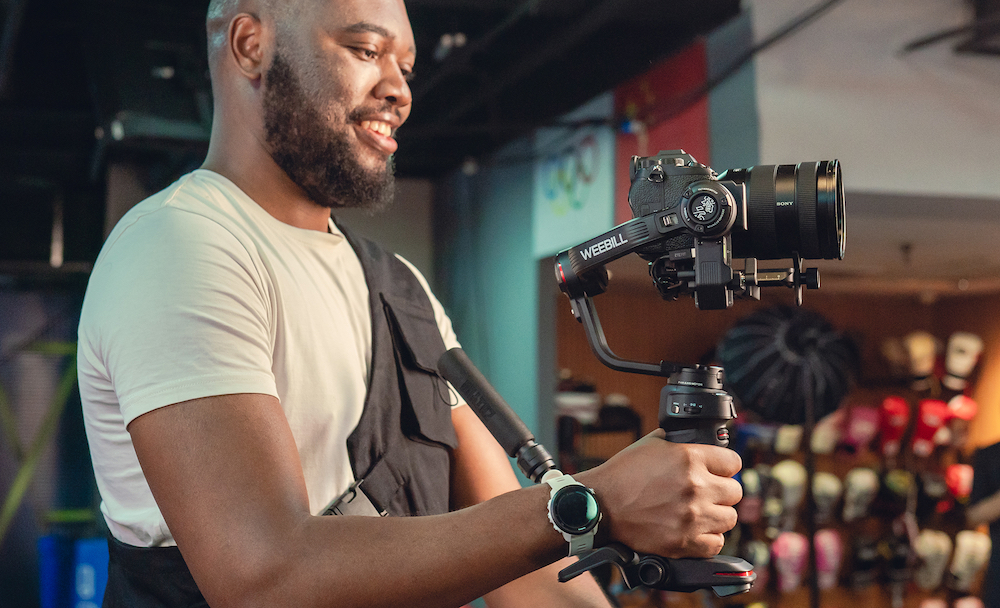 Zhiyun has introduced its new professional Zhiyun WEEBILL 3 gimbal, which has several built-in features and improved ergonomics for filmmakers.

The gimbal has a built-in microphone, a built-in LED-light and a built-in battery, which allows you to use the gimbal for up to 21 hours.

These are a restructured L-shape handle that’s more stable when self-standing, a wrist rest and a repositioned, extendable sling grip that’s said to provide over 40% more support to your wrist by shifting the weight onto your arm.

The extra support reduces fatigue, allowing for extended use in comfort.

By moving the sling grip to the bottom of the gimbal you can get better stability and shake-prevention when shooting at low-angles.

The grip includes thumb buttons, a mini control stick for movement, a finger trigger and a wheel.

The wheel can be customised according to preferences of shooting modes and action parameters, such as camera paras, movement along axes and follow focus.

The Zhiyun WEEBILL 3 includes a built-in Hi-Fi microphone and 1000 lumens fill light for a fast and efficient setup-to-shoot experience.

These added-in accessories potentially save filmmakers from the fuss of additional wires and the weight of extra accessories.

The bright LED fill light offers colour temperature adjustment to meet the requirements of each scene.

Compared to the previous version, the WEEBILL 3 upgrades the large 7,800mAh internal battery, which now provides up to 21 hours of use for all-day filming support.

With support for PD fast charging (0-100% in two hours) and pass-through charging of attached cameras (5V/1A), the WEEBILL 3 is said to offer ‘outstanding endurance with minimal downtime.’

The Zhiyun WEEBILL 3 gimbal in use on location

The new Zhiyun WEEBILL 3 will be available from July 2022 at Zhiyun dealers in Great Britain and Ireland.

There are two versions: the WEEBILL 3 Standard and the WEEBILL 3 Combo (which includes a small tripod, sling handle, wrist rest and backpack).

9 Common Video Problems and How to Fix Them