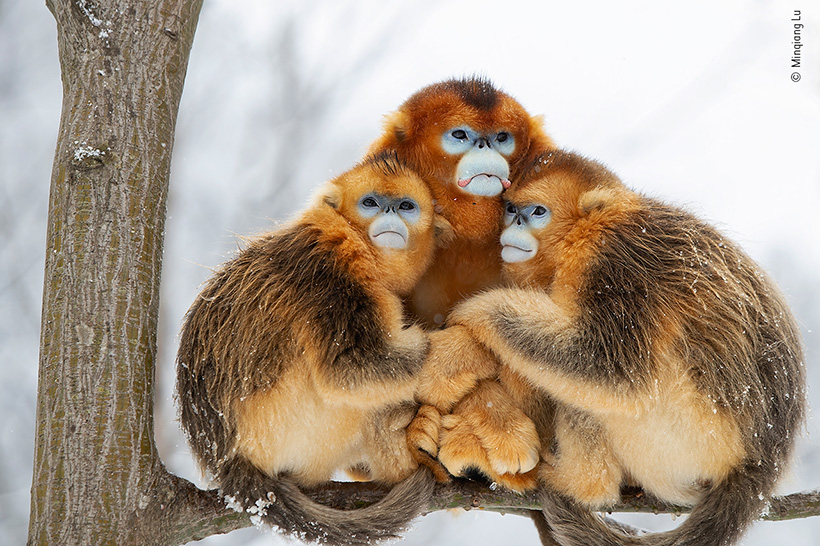 The Wildlife Photographer of the Year (WPY) People’s Choice Award shortlisted images have been announced and voting will take place from today until the 2nd of February 2023.

The top five images will be displayed online, along with the winners of the fifty-eight-competition announced earlier this year. The winner will be showcased in the Wildlife Photographer of the Year voting screens at the Museum until the exhibition closes on the 2nd of July 2023.

For the first time, the public will be able to vote for their favourite image using interactive screens located inside the newly designed Wildlife Photographer of the Year flagship exhibition at the Natural History Museum. Voting is also open online.

Dr Douglas Gurr, Director of the Natural History Museum says, ‘Voters will have a challenge to choose from this stunning range of photographs which tell vital stories and connect people to issues across the planet. We are looking forward to finding out which of these images emerges as the favourite.’

Wildlife Photographer of the Year is developed and produced by the Natural History Museum, London.

See some of the shortlisted images below:

Spotted hyenas are intelligent and opportunistic animals. On the outskirts of cities such as Harar in Ethiopia, they take advantage of what humans leave behind, including bones and rotting meat. In so doing, the hyenas keep disease at bay, and in exchange the Harar locals tolerate them, even leaving them butcher’s scraps.

These hyenas are from the family group known as the Highway Clan. To photograph them, Sam set up a remote camera by a roadkill carcass. He captured the lowest-ranking member of the clan after the dominant members, visible in the background, had sauntered off.

Among the flowers by Martin Gregus, Canada

Martin watched this polar bear cub playing in a mass of fireweed on the coast of Hudson Bay, Canada. Every so often the cub would take a break from its fun, stand on its hind legs and poke its head up above the high flowers to look for its mother.

Wanting to capture the world from the cub’s angle, Martin placed his camera – in an underwater housing, for protection against investigating bears – at ground level among the fireweed. He then waited patiently a safe distance away with a remote trigger. Not being able to see exactly what was happening, Martin had to judge just the right moment when the bear would pop up in the camera frame.

Two females and a male golden snub-nosed monkey huddle together to keep warm in the extreme winter cold. Threatened mainly by forest loss and fragmentation, this endangered species is confined to central China. Restricted to living high up in the temperate forests, these monkeys – here in the Qinling Mountains in Shaanxi province – feed mostly in the trees, on leaves, bark, buds and lichen.

Minqiang knew the area where a troop of monkeys often rested and, in heavy wind and snow, he walked up the mountain for almost an hour carrying his photographic equipment. Photographing from a slope opposite the tree in which the group was huddled, he stayed put for half an hour in temperatures of -10°C (14°F) before he was able to achieve this eye-level composition.

A young perch was found trapped in the thumb of this surgical glove discarded in a canal in The Netherlands. Since the onslaught of Covid-19, gloves and face masks have littered land and sea.

This perch was found by citizen scientists on a weekly canal clean-up in Leiden. The spines on its back prevented the fish from escaping by backing out – the torn thumb probably the sign of its final struggle. The glove formed the basis of a scientific study that has documented the range of animals impacted by Covid-19 waste during the pandemic – in this case, it’s the material that helped protect us that has proved to be a danger to wildlife.

On a chilly day in North Shore on Prince Edward Island, Canada, a pair of red foxes, greet one another with an intimate nuzzle.

The red fox’s mating season is in the winter, and it is not uncommon to see them together prior to denning. This special moment is one of Brittany’s favourite images and one of the tenderest moments she has witnessed between adult foxes.

Wildlife Photographer of the Year 58 exhibition at Natural History Museum

A redesigned exhibition featuring all of the awarded images opened at the Natural History Museum in London on Friday 14th October. The flagship show includes short videos, quotes from jury members and photographers. Plus insights from the scientists who work at the museum. Visitors are invited to explore how our human actions have an impact on the natural world. The London exhibition closes in July 2023 and will then tour across the rest of the UK. As well as to international venues across Europe and the rest of the world.

Use #WPY58 on social media.

Enter the 59th Wildlife Photographer of the Year competition

Inspired by the images you see here? Enter the 59th edition of the Wildlife Photographer of Year competition.

How to shoot wildlife photography a beginner’s guide

The best photography competitions to enter in 2021