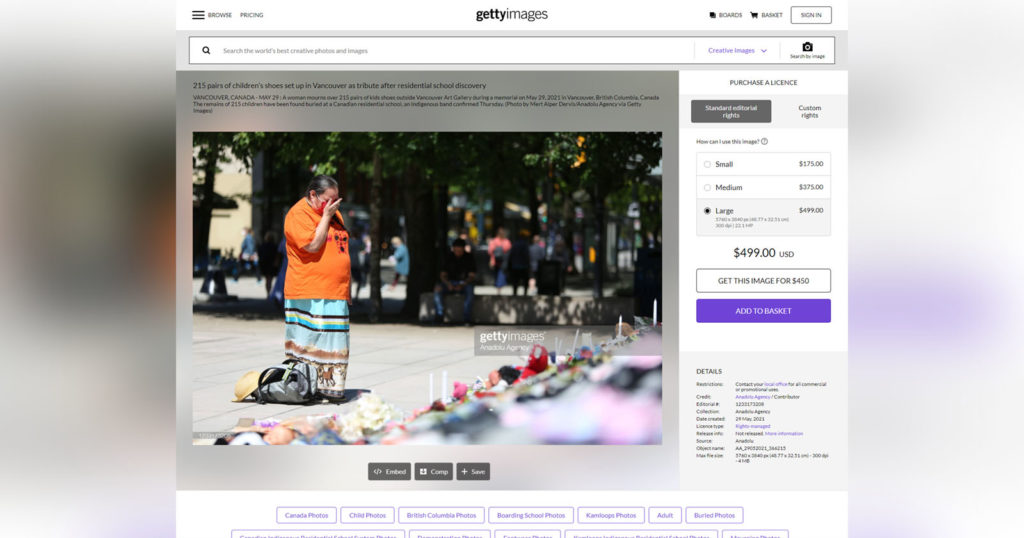 A Canadian woman has raised concern after discovering that a photograph of her mother mourning at a memorial site is now sold and licensed through Getty Images.

Sunset John of Prince George, British Columbia, Canada, came across the photograph captured by photographer Mert Alper Dervis of Anadolu Agency back in May and licensed by Getty Images. The image shows her mother, Loretta John, mourning at one of several memorial sites set up in Canada following the discovery of gravesites of hundreds of Indigenous children at former Indian residential schools. One such site is in Vancouver, where Lorretta was unknowingly captured by the photographer during a quiet moment of grieving and praying.

Canadian news outlet CKPG reports that both daughter and mother came to find that the photograph was being circulated online after it was brought to their attention by Loretta’s colleague.

The photo can be licensed through Getty Images for up to CA$575 (~$458.5). Sunset tells CKPG that she and her mother are upset because she believes that the company is profiting from a tragedy and notes that the photographer didn’t approach her nor did the company ask her before putting it online. She adds that her mother wouldn’t have minded the photograph taken but doesn’t like that it is being sold, stating that “that they’re exploiting off our trauma.”

Getty Images responded to the family’s complaints with a statement that reads: “At Getty Images we have a responsibility to provide faithful and comprehensive documentation of the events that we cover, and we do not take lightly the decision to publish this and other similar images.

“As you have noted, the discovery of unmarked graves of indigenous children at Canadian residential schools is newsworthy and of public interest. We understand that the woman in the image may be uncomfortable with how her personal experience, and what she may have regarded as a personal moment, has intersected with the public interest but it is undeniably newsworthy and that is why the photographer from Anadolu Agency made the images and we licensed them to our client news outlets.”

The company also points out that the image is available for editorial use only as the person depicted has not provided a commercial release, and for that reason, the image cannot be used for commercial or merchandising purposes, and “may only be used in connection with events or topics that are newsworthy or of general public interest.”

“Our editorial photography and footage informs people, public policy, services, and markets,” the company continues. “We always endeavor to maintain the balance of an individual’s right to privacy with our obligation to cover the story in the public interest of exposing difficult issues.”

The Johns are reportedly considering contacting a lawyer to see if anything can be done legally, but Canadian law seems to be firmly on the photo agency’s side.

“The law has been rapidly developing in Canada over the course of 20 to 25 years as technology has developed. One of those exceptions of course is matters of legitimate public interest, or crowds, or things of this sort,” Canadian lawyer Dick Byl tells CKPG. “If she were to bring an action, if she were to sue, I think she’d probably not be successful because of that.”

The Johns say that even though they understand the legal defense of the photo, they still wish that the photographer had asked for permission and that the money made from licensing the image would go towards supporting the Indigenous groups.