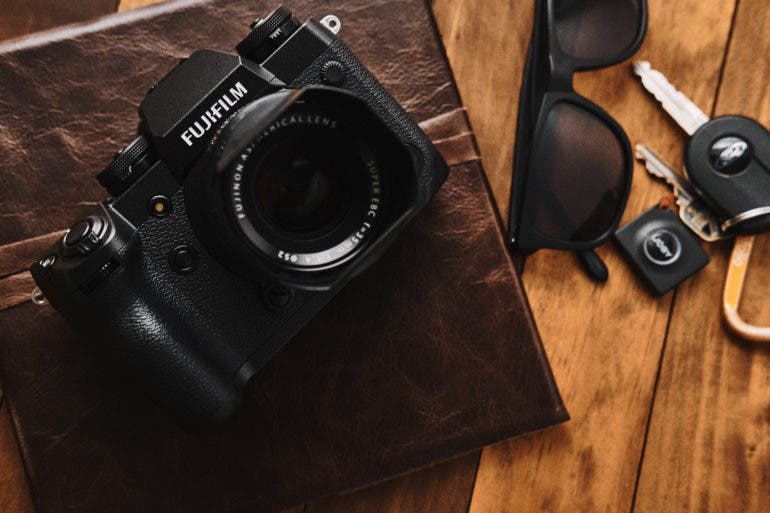 The staff at The Phoblographer adore their Fujifilm camera. Three of us own products for the system. Two others are considering switching over. And for the past decade, I’ve basically bought new Fujifilm lenses or cameras each year. I’ve accumulated a lot. Over the past year, I decided it was time to pare down. We all do it! We all end up buying a new lens or sometimes a new camera that we don’t use often. So, I got rid of them. Well, I didn’t get rid of everything; I paired it down to just the necessities.

This is a sponsored blog post by Adorama. Trade-in camera gear you’re no longer using. Want to upgrade to a weather-sealed lens? Or do you want to get the latest GFX series camera and trade in an older one? Well, eBay can be a bit of a pain, but Adorama makes it pretty convenient for you to sell to them. Just tell them about the equipment you’re selling to get a quote.

Let’s go through this first. Here’s everything I used to own from Fujifilm:

Let’s be honest; that’s a lot of Fujifilm gear! And I realized that I wasn’t using a good bunch of it. To be honest, some of it just didn’t bring me joy. I know photographers who adore some of these lenses, but they just didn’t do much for me. I like getting unique image quality from a lens and not needing to do any post-production. Arguably, it’s the reason why you buy into Fujifilm to begin with. So, I got rid of the gear that didn’t serve me.

Look in your camera bag. Are you truly a minimalist? If you’ve shot for a long time, there are probably items that you rarely ever use. This is a thought process that’s changed over the years. Your grandparents still probably have old film cameras sitting around somewhere. But those continue to work almost like the day they got them. Digital is different. Unlike what your grandparents did, it doesn’t make sense to hold onto most digital cameras for that long. There’s no point in storing a bunch of those cameras in your closet in camera bags. I say this because it’s literally become the case for me. Why should I hold onto a camera that I don’t use anymore? Unlike something like a Sony a7, it doesn’t really make sense to repurpose a Fuji camera. By that, I mean to do something like convert it to infrared. The X Trans sensor and the processor are so unique to begin with. Why would you mess with something completely unique?

This year, pretty much our entire staff switched over to using Fujifilm cameras. One of our writers is considering an upgrade to the GFX system from her aging Canon DSLR. In her mind, the Fujifilm GFX 50S II is around the same size, but lighter and more durable. It boasts a larger sensor, image stabilization, and a lot more technology on the inside. The face detection works well, and there’s even a skin-softening ability that helps you avoid editing. Combine this with the Fujifilm Film simulations, and you’ll pretty much never need to edit. It’s incredibly liberating for her, especially after she reviewed it.

I’ve personally shopped at and used Adorama for years. Trust me, I used to work at a camera retailer. It’s hard to beat what Adorama does. They’re also a very ethical choice since and that is important to folks these days. I know our readers care. A friend of mine came to me asking where the best place to sell his old Mamiya gear is, and I often see this question on various message boards. I can’t recommend Adorama enough. When you’re ready to purchase new gear, come back to them. They’ll probably have a truly fantastic bundle deal that you can’t turn down.

This is a sponsored blog post by Adorama. Trade-in camera gear that you’re not using anymore. Want to upgrade to a weather-sealed lens? Or do you want to get the latest GFX series camera and give in an older one? Well, eBay can be a bit of a pain, but Adorama makes it convenient for you to sell to them. Just tell them about the equipment you’re selling to get a quote.