What Cameras did the World’s Greatest spy James Bond use? 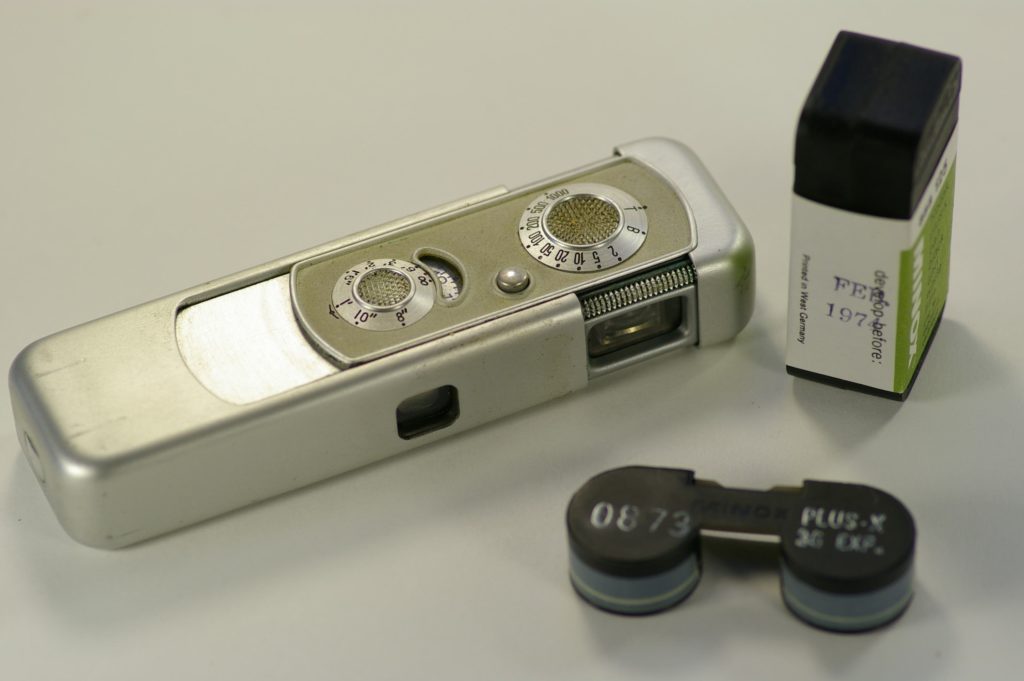 There have been seven actors to date who’ve played the role of James Bond on the big screen. Discussions at parties over which one played it best can be never-ending. What I do like talking about, though, is the various cameras used by these actors over the decades. Between functional and fashionable, dippy and diabolical, we look at four unique cameras featured in James Bond movies between 1962 and 2021.

Everyone has a favorite Bond actor. We’re all familiar with the outrageous and stylish gadgets 007 uses during his worldwide missions. But how many Bond fans know which camera models those actors used on-screen during their performances? These cameras played minor yet important roles in their respective films. I picked my top four from the current list of 24 Bond movies. While some of these cameras might have been mainstream, their purposes in the movie were far from it.

A brainchild of the legendary Jacques Cousteau and originally designed by Belgian Jean de Wouters, this camera was first commercially manufactured in 1960. It was the first 35mm film camera that didn’t need a separate underwater housing. Its compact size was a revolution, and it put to shame the bulky housings of the past. In 1962, the manufacturer La Spirotechnique decided that they wanted to increase sales figures. Nikon came into the deal, and they quickly rebranded it as Nikonos. A staple for underwater photographers for many decades, the Nikonos series always remained a 35mm. Photographers even use it today for their adventures under the sea.

The 2nd Bond film, Thunderball, showcases this camera in two scenes. As the two engage in their typical banter, Bond is handed the Nikonos by Q (played by Desmond Llewelyn).

Q: Now here’s something I want you to use with special care.

JB: Everything you give me…

Q: Is treated with equal contempt. Yes, I know. But that’s an underwater camera. It takes eight pictures in rapid succession by pressing that button there.

JB: Is that clever?

Q: Well, if it can take pictures in the dark with an infrared film, yes. Try to be a little less than your usual frivolous self, 007.

We also see it on-screen when Bond shows Domino (played by Claudine Auger) how to use it as a Geiger counter to detect if bombs are on board the Disco Volante boat. In close up scenes, the logo is masked with some tape. However, there’s no mistaking the model seen there.

George Lazenby is the only actor to date to play James Bond in just one film from the official series. The story of how Lazenby managed to snag this coveted role is wonderfully narrated in the documentary Becoming Bond. Playing the suave British spy in 1969’s On Her Majesty’s Secret Service, he uses a Minox A/IIIs as a spy camera. It was featured in the scenes where he was out to destroy chief villain Blofeld’s lair in Switzerland. Discovering a hidden map of some importance, he uses the camera to take images of various locations on it. The viewfinder frames of the camera are overlayed with an odd, neon green tinge. I’m unsure why a spy would need this filter: other variations of the Minox A/IIIs came without them. Unintentionally probably, Bond is using this camera upside-down during these scenes.

This camera would have been the ideal companion for a spy on a covert mission in the film era. It measures at a tiny 3.2 x 1.1 x 0.6 inches, much smaller than a standard cigar. A spy with the skills of 007 would find such a camera perfect for snapping away unobtrusively. Designated as a sub-miniature camera (back then, 35mm cameras were designated as miniatures), they were designed by Latvian Walter Zapp. His aim to create a camera that could be concealed in one’s hand was realized with the 1938 Riga Minox. The film advance mechanism used the shell over the chassis of the camera. This is also what conceals the lens and the viewfinder window when collapsed. The ‘s’ indicates the presence of a flash module connector.

Why Not Buy Some Film and a Used Minox?

These cameras used 8×11 film also known as Minox Spy film. You can still buy some of these rolls today. Weighing just over 2 ounces, they came in delicate boxes, which are collectors’ items today if in mint condition. Produced from 1955 to 1969 (the year of this movie’s release), the Minox A/IIIs lasted much longer than Lazenby’s mainstream film career.

The smooth-talking, suave Roger Moore used several cameras as Britain’s top spy during his seven-film run. However, my favorite of the lot is a rocket launching Nikon F2 Photomic coupled with a motor drive. This model appears in his second James Bond film, The Man with the Golden Gun. The Nikon brand is visible in many scenes and it’s possible they sponsored the movie. Bond is seen entering and exiting an electronics store that features Nikon insignia. Later scenes show a tourist holding another F2 model.

The word ‘Photomic’ indicates that the prism also houses the selenium light meter of the camera. With the 1962 launch of their first Photomic model, Nikon discontinued their clip-on light meters. Almost all their future models included a built-in light meter. James Bond’s version in this film was capable of blowing a hole through a brick wall when tested at Q’s gadget laboratory.

The Nikon F2 had five Photomic highly sought after variants. You could set shutter speeds between 10 seconds and 1/2000. This was an upgrade over the 1s-1/1000 range of the Nikon F. You could read the light meter from the top of the camera. The large viewfinder makes manual focusing a breeze. I wish I could add one of these to my collection. My family says I have too many vintage cameras already. Having said that, a couple of the F2AS models are on my eBay wish list.

James Bond (or maybe Q) took the title of this film a little too literally. Two time James Bond actor Timothy Dalton comes close to being frazzled by a custom made Polaroid Spectra camera in his final Bond film.

During an amusing scene, an acquaintance from the CIA toys around with a Polaroid Spectra camera. While Q and Bond are looking at a camera-gun contraption, agent Pam Bouvier picks up the Spectra from Q’s suitcase. Pointing it at the duo, she asks them to smile for a picture. The laser beam resulting from the shutter press goes between them and cracks a framed portrait behind them. Understandably not impressed, Q grabs the camera back from Bouvier. She still manages to hold on to the Polaroid print that it gave – an X-ray image of Q, Bond, and funnily, the person in the framed portrait.

Polaroid debuted this line in 1986, and being a new format, it ushered in a new kind of film. Known as 1200 film, it wasn’t square like the typical Polaroid 600 format. It wasn’t as slim as the SX-70 when folded down. Doesn’t the pop-up mechanism of the lens remind you of the Ferrari F40? Minolta even made an Instant Pro version of the Spectra under license from Polaroid. This model actually goes for a lot more than a used Spectra due to its rarity today.

It was less than two years ago (October 2019) that Polaroid discontinued their wide-format Spectra film line. The company stated that this was due to the persistent issues with this camera line. You can still snag one of these off eBay along with the 1200 format film it uses. Most of them feature an f10 125mm (46mm full-frame equivalent) lens. I doubt Bond would have much use for a regular Polaroid camera: too bulky and slow to develop, nothing at all like what a spy needs in the field.

“Jamming and frequent breakdowns are now affecting the majority of these cameras, and unfortunately, this is not something we can influence with our film”

Okay, technically, this one isn’t an on-screen camera. Well, not yet at least, since No Time to Die hasn’t hit our screens. Current James Bond actor Daniel Craig and British photographer Greg William collaborated with Leica on this. This limited-edition run in a stunning black and gold finish retains the Leica Summilux 28 mm f1.7 lens and 47-megapixel sensor of the current Q2 model.

“The Q2 is, for me, the perfect camera and needs no improvement. So, to have the chance to work with the amazing people at Leica and my friend, Greg Williams, to create something as unique as this, has been a privilege and an honour.”

The only place I saw it at the time of writing this article is the Leica Australia store. It’s possible that the US units are already sold out. Only 750 were made for global release.