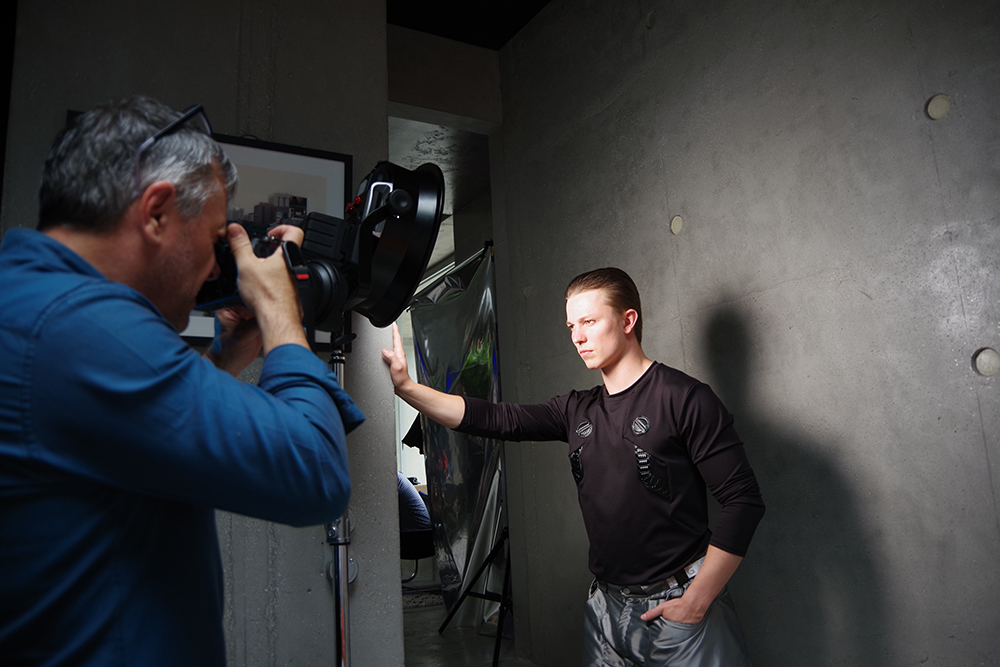 Fans of Grand Designs may remember a family home made entirely from bare, unpainted concrete blocks. Inspired by post-war brutalist architecture, it made the perfect setting for a sci-fi themed photo shoot.

This time Rotolight brought a couple of new modifiers for us to try out: The R90 Parabolic Umbrella Softbox and the SmartSoft Box. Here are a few of the pictures we took during the day.

Hamish Scott @hamishwjscott_model was photographed against an illuminated red sign on the wall and lit using an AEOS 2 fitted with the SmartSoft Box, set to a matching red gel. A NEO 3 was placed directly behind the model’s head facing towards the camera, to produce the blue rim light. Picture by Nigel Atherton using a Nikon Z 7 with 85mm f/1.8 S lens. 1/250sec, f/4.5, ISO 1600

Rotolight’s new LED lights are a leap in technology. More power, softer illumination (thanks to the new dome diffusers) and the addition of RGB WW LEDs that enable up to 16.7 million colours to be selected using the touchscreen interface, which can be used in flash as well as continuous mode. A new iOS and Android app enables multiple lights to be controlled remotely.

A hanging sheet of highly reflective mylar film provided the distorted reflection for model Katie Willy @katie.t.willy in this shot. The key light was an AEOS 2 with the dome diffuser, set to a cyan colour, while a second AEOS set to orange lit her from behind. Picture by Nigel Atherton using a Nikon Z 7 with 24-70mm f/2.8 S lens. 1/80sec, f/2.8, ISO 400

Events by The Creativity Hub

OFFER! Buy the Creativity Hub Bundle (an AEOS 2, NEO 3 plus R90 softbox and other accessories) and get a free ticket to a future Creativity Hub event worth £400. For details visit www.rotolight.com/creativityhub

Roxana Gavrau @gavrauroxana, was photographed in front of a yellow curtain through which daylight was shining. She was lit using a blue light from a Rotolight Titan, with magenta fill from an AEOS 2. Picture by Nigel Atherton using a Nikon Z 7 with 85mm f/1.8 S lens. 1/100sec, f/4, ISO 400

Nan Mthembu @sansmelanin, was photographed on a yellow sofa using two AEOS 2’s, the model was lit in orange and the background in blue. Picture by Nigel Atherton using a Nikon Z 7 with 85mm f/1.8 S lens. 1/80 sec, f/4, ISO 400

Actor and model Lee Hoy @leejayhoy, photographed in a corridor of the Concrete House. The green light on the wall came from an AEOS 2 hidden in the doorway, while the cyan light came from another AEOS 2 next to the photographer. Picture by Jessica Miller. Pentax K-70 with 18-135mm lens. 1/400sec, f/4, ISO 3200