We All Desire to Be Free Feels Zach Bohannon (NSFW) 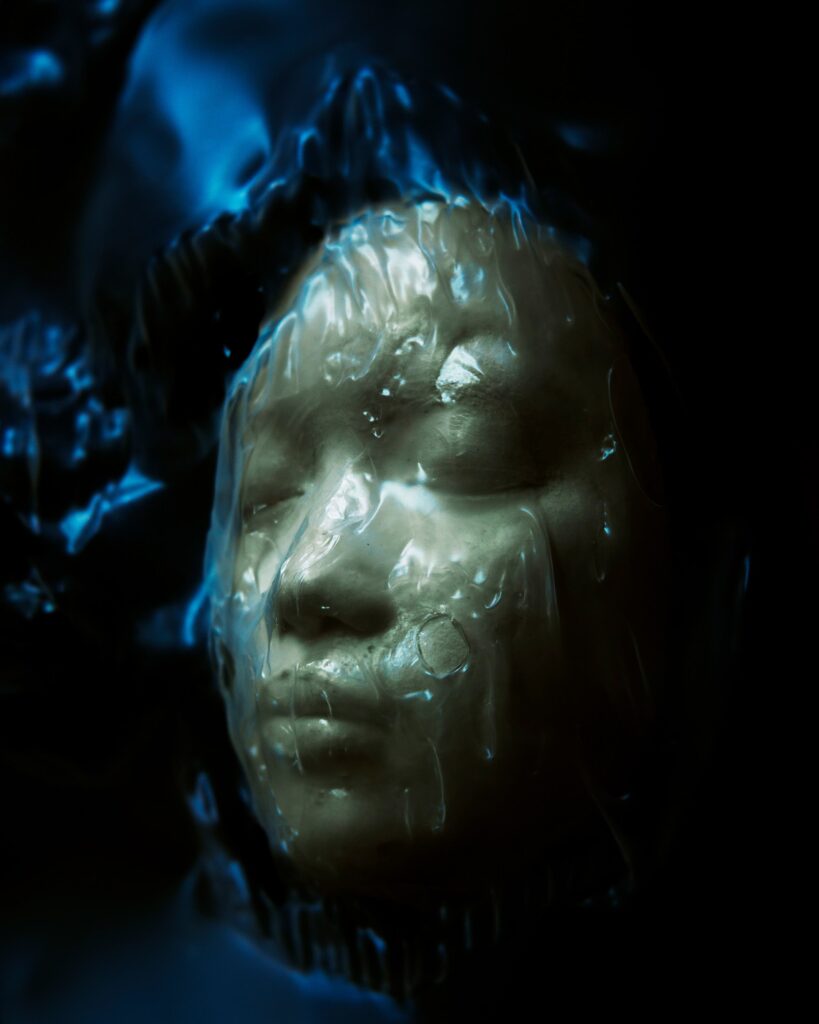 “I think about the way my DNA responds to and informs my identity,” says photographer and visual artist Zach Bohannon about his personal lineage. This seeps into his surreal photography that borders on ethereal and otherworldly concepts. And he says life is all about the cyclical process of awakening and reawakening to find the right balance for each of us.

Seeing some of Bohannon’s work took my mind back to the first time I saw The Matrix. The amount of subtext in that film is unbelievable. On its surface, though, it visits and revisits (across the extended trilogy) the very concept of awakening that Bohannon showcases in his work. I wasn’t surprised when he said this film is one of the inspirations for his style of photography. It’s all about escaping what we’re used to and seeking awareness of what’s around us.

I almost always shoot with a Nikon D800, but I also use a Canon 6D to make work. The Nikon system has suited my practice a lot better, as it allows me to shoot self-portraits on an interval timer.

The Phoblographer: Hello, Zach. Please tell us about yourself and how you got into photography.

Zach Bohannon: I’m 22 years old right now, and I remember first being attracted to fine art photography when I was 12 or 13. Seeing the work of people such as Brooke Shaden, Kyle Thompson, and Alex Stoddard inspired me to want to create similar things. I became captivated by the way that photoshop could render an impossible scene completely lifelike and believable. Seeing images like these opened up my mind to limitless possibilities. It was the belief that I could create anything I wanted that skyrocketed my motivation to create photographically.

The Phoblographer: A lot of your work is based on self-portraiture. When did you start wanting to photograph yourself more in your art pieces?

Zach Bohannon: I was first exposed to self-portraiture through the photographic works of contemporary artists like Brooke Shaden, Kyle Thompson, and Alex Stoddard. Mirroring what I saw in others’ work, I began to use myself as a subject very early in my practice. I always found self-portraiture to feel very natural for me. Growing up surrounded by fields, forests and farms was isolating to some degree. Starting in this space of separation from other people encouraged self-portraiture. With continued use, I have observed the integration of myself into my art as both therapeutic and introspective. I think that using myself as a subject has allowed me to become more aware of my own being.

The Phoblographer: There are also many outdoor-based images in your portfolio. Does this stem from your childhood growing up in farmlands and close to forests?

Zach Bohannon: Yes, growing up around land that wasn’t heavily developed influenced the presence of the natural world in my art. I grew up respecting nature with a sense of reverence and curiosity. As an adult, it feels natural to not only create work that embodies this perspective but also allows me to connect with the earth when creating. The outdoors opens up a variable quality within the work that always helps me release expectations of what a photograph will end up looking like.

The Phoblographer: I wouldn’t quite call it sci-fi, but I do see themes in your photos that I’ve observed in some cult classic movies. Any inspirations from cinema that subconsciously shape the stories of your projects?

Zach Bohannon: I like that association you made between science fiction and some of my work! Some of my favorite films are ones that explore our connection to our individual pieces of the universe or our relationship with technology. The first that comes to mind as a subconscious inspiration is The Matrix. Themes of awakening, struggle against imposing powers, and a very dark relationship with technology definitely resonate for me from this film.

Lens wise I generally like to shoot with gear that mimics human vision, the Canon 35mm 1.4 and Nikon 50mm 1.2 are staples for me. Over the past two years or so, I’ve begun to experiment a lot more with the kind of lenses I’m working with.

The Phoblographer: It almost seems like souls wanting to escape from the clutches of everyday reality. What is New Primordial about?

Zach Bohannon: New Primordial began as an investigation into the relationship between our species and plastic. The piece Death Mask embodies the idea I started with; plastic is our legacy (and our stain) on this planet. The idea originated from the ancient Roman practice of casting faces of the dead in plaster to create death masks.  Thinking about what that might look like in a contemporary setting informed my process of using plastic to distort and mimic human form. Plastic is this strange material that we’ve incorporated into nearly every aspect of our lives. It’s even present in our own bodies. This series captures feelings I’ve had in the face of this daunting aspect of our reality—one that none of us are able to live outside of.

The Phoblographer: Womb Memory is a self-explanatory title, but what feelings and emotions governed the composition and lighting?

Zach Bohannon: I can remember distinctly at lower points throughout my earlier life—and in the present at times—this feeling of ‘wanting to go home.’ The way I understand this feeling now is that I have this desire to simply be. The teachings of the late Alan Watts, Terence Mckenna, and Ram Dass have greatly informed my understanding of this feeling. The desire to be freed from suffering: to feel comfort in harmony. Womb Memory explores the fluctuations of this feeling and how “home” (the womb) is always exactly where I am at, in the present moment.

The Phoblographer: Why did you keep this set in black and white?

Zach Bohannon: I wanted the composition, lighting, and forms to take precedence in this set of images. It also felt very supportive of the conceptual narrative I began working with when creating these images.

One of my most frequently used lenses as of late has been the Lensbaby Velvet 56mm f1.6 for Nikon. I find that the focal length maintains a nice distance away from the subject, while the altered aspects of the lens produce a beautiful, lustrous glow around the edges of the frame and subject

The Phoblographer: Many of these are like poetry with images, and they have some apt captions alongside them. Do these come into your mind as you make the images, or are they considered afterward?

Zach Bohannon: I would say that a lot of the titling process revolves around expanding on ephemeral ideas I had floating around my consciousness while shooting. These feelings come to the surface when I am shooting and when I am editing these images digitally. Focusing on themes of release, non-attachment, and responses to those themes. I wanted to capture a strong sense of the cyclical nature of the process of spiritual awakening. Being confronted with new revelations, struggling/resisting, integrating, and finding balance only to do it all again.

The Phoblographer: Are humans truly cognizant of where this world is headed? Would you say your work is an attempt to make viewers take a good look at themselves in this regard?

Zach Bohannon: I optimistically embrace the idea that more and more people are elevating their levels of awareness in the world. I think that this shows through the art being created right now. There seems to be a strong focus on themes of healing and transcending. I create art to also encourage this process of awakening, within and outside of myself. I enjoy seeing the different ways that everyone interacts with the work I make. Some understand on a much deeper level initially, while for others, it may give a brief moment of pause. Both are successes in my book.

The Phoblographer: Ethereal concepts aren’t new to you. What reality and awakening-based projects do you have in mind for the future?

Zach Bohannon: Right now, I’m coming to a good stopping point with creating Womb Memory. Moving forward, I’m looking toward my goal of using my art as a means of expressing the beauty and gift of being alive on this planet right now. I want to create more art that unifies people. Accessibility is something that I’m honing in on in terms of the presentation of the work (public spaces).

Experimentation has led me to embrace the use of fisheye lenses, specifically the Nikon AI-S 8mm f2.8 circular fisheye

The Phoblographer: What does being an Asian American mean to you? And how does this identity fit into your photography?

Zach Bohannon: Being Asian American carries my family’s legacy through me. It means that I think about the way my DNA responds to and informs my identity. I firmly believe that every individual alive today harbors some knowledge and wisdom imparted to them by their ancestors. I see those who came before me through the art they made and left behind. My Chinese family tree contained more than a few artists whose art I was exposed to as a child. I think that a great deal of this art influenced the way I interpret and execute atmosphere within my images. At the end of the day though, being Asian American is something that just makes up part of my human body / physical self. It is an interesting bit of information about me, but it’s not my entire identity.

All images by Zach Bohannon. Used with permission. Visit his website and Instagram to see more of his photography.