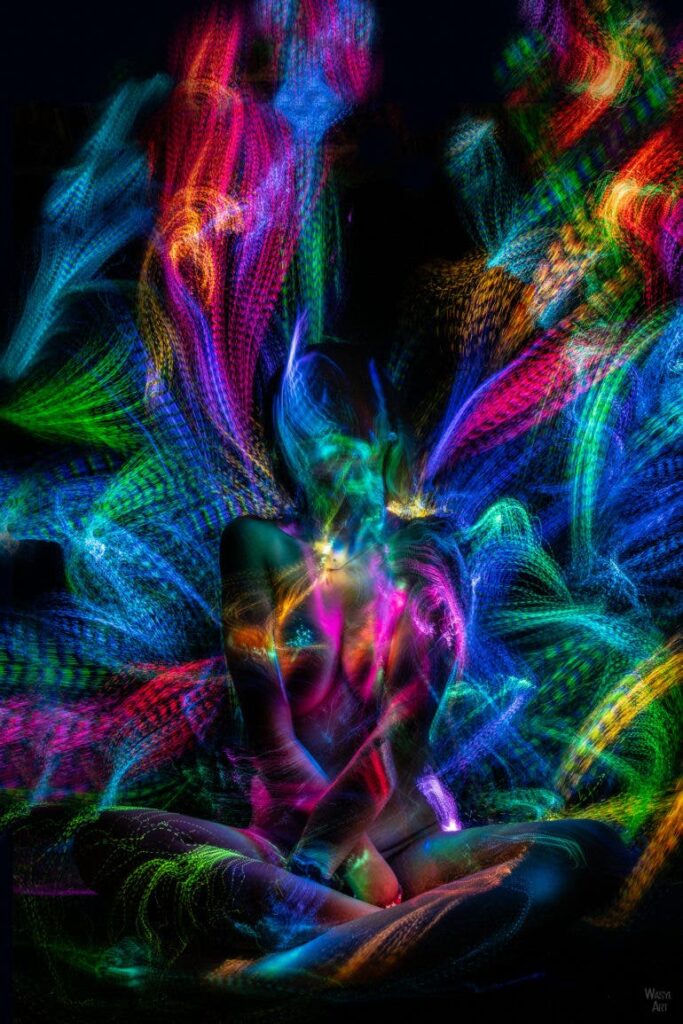 “I appreciate the element of chaos that comes with fiber optics,” the photographer Krzysztof Wasylkowski, who also goes by the moniker Wasyl Art, tells me. “Happy accidents are unavoidable as I move the light through the darkness, but they always add to the photo’s magic.” To date, he’s created hundreds of portraits using fiber optic light painting brushes and long exposures in a darkened studio. These brushes produce ethereal whips and streaks of light that dance across the human body, according to the artist’s movements.

You can view this article and much more with minimal ads in our brand new app for iOS, iPadOS, and Android. And for $24.99/year, you can have a banner ad-free experience.

Looking at Wasylkowski’s series Daydream, I can’t help but think of the practice of aura photography. While aura photography has experienced a trendy renaissance in recent years, it dates back to the late 1930s, when Semyon and Valentina Kirlian started experimenting with electrical discharges on film, which they believed held psychic power. While Wasylkowski’s process is entirely different, he isn’t surprised by the comparison.

“Sometimes, I describe this project as ‘photography that shows peoples’ auras,’” he admits. “My photos are about making our souls–things that are deep inside a person–visible. This effect is similar to an aura. I listen to my models, and I admire how open they are during our sessions. Often, I find this work has great spiritual value. People aren’t used to this alternative process of making images. It’s slower than simply snapping a photo, and the touch of that light brush makes the process feel tangible.”

The Essential Gear of Krzysztof Wasylkowski

“In the beginning, I used the Lumix LX-15, a one-inch compact camera, which gave me the opportunity to tweak my settings manually. And it was so small that it fit in my pocket. After two years, I changed from the Lumix to the Sony A7III with the Tamron 28-78 2.8 lens. I have an ordinary tripod and a remote control shutter release for the camera. And, of course, I have light painting brushes, including optical fiber brushes connected to a colorful flashlight with various modes.”

Phoblographer: How did you get started as a photographer, and what drew you to light painting?

Krzysztof Wasylkowski: My motivation to take up photography came when I witnessed a beautiful sunrise at a psychedelic music festival here in Poland, the Light Move Festival. The sun was emerging from the mountains, which were still engulfed in the morning fog. I felt that I would like to have the power to freeze this beautiful moment and come back to it whenever I wanted. That was September 2018.

After this experience, I purchased my first camera: the Lumix LX-15. From the beginning, I already found myself experimenting with my settings. During those first sessions, I started playing with long exposures and observing the traces that were left by different sources of light in motion.

I used all sorts of lights: optical fibers, LED lamps, poi balls, and more. I saw on the internet that other photographers had used this technique to “paint with light,” and I felt inspired to set up my first official test with Patrycja, one of the models.

Krzysztof Wasylkowski: I think that the main difference between fiber optics and other light sources is that you actually have a vast number of light sources included in a single fiber optic brush. The other thing is that you get light throughout the entire strands, from end to tip. When I first used two-meter-long strands, I found it was difficult to control them!

Still, these longer strands are great for waving in the air and creating large compositions that resemble volcanic eruptions or faraway galaxies. You can use LED sticks for light painting, but you won’t see these elements of chaos like you get with a fiber optic brush. I use two kinds of fiber optic brushes: white and black.

Phoblographer: What are some of the biggest challenges that come with light painting with fiber optics? How do you overcome them?

Krzysztof Wasylkowski: You have to learn how to hold and move the light brush while painting, and that takes practice. You can easily overdo the effect, with the model essentially disappearing into a thicket of abstracted light.

Complete darkness is also essential for light painting. Before I was doing sessions in my studio, the hardest thing was making the room completely dark. Often, we decided to schedule our photoshoots for nighttime or spread out big black sheets to block the light.

You also need to make sure that the model is motionless during the long exposure. I prefer to lay the model down on the floor because otherwise, it is very difficult for them to stay still without moving or shaking. Who would have thought that staying completely still for just one minute would be so hard?

Phoblographer: Do you have any signature techniques or tricks for getting a specific effect in your pictures?

Krzysztof Wasylkowski: The specific position of the brush is something that I develop during each individual session. It is difficult for me to describe the painting process, but I’ll try. I lay the fiber on the skin of the model and move it across the body in such a way as to create an impression of the body’s shape–composed entirely of light.

Some factors that make a significant difference in the final effect include how fast you slide the brush over the body, how hard you press, and how wide apart the individual strands are. Sometimes, I use two brushes at the same time. Occasionally, at the end, I’ll even use some white light in several places for a few seconds to reinforce that human shape or figure.

Phoblographer: Who are your models, and how do you select them? Do you think of these shoots as collaborative?

Krzysztof Wasylkowski: I create all my projects with open- and broad-minded people. For the most part, they are my friends, but sometimes when I meet a new person and we have chemistry, we’ll decide to collaborate.

My main contacts are the result of projects we’ve done in my home photography studio. The models that I collaborate with often share a lot of their own ideas. Sometimes, we will meet each other without detailed plans and draw from various sources of inspiration, bringing different concepts to life.

When a new person reaches out hoping to model for me, I usually check out their profile on social media. I actually don’t look at the person’s appearance, but I pay attention to the qualities he or she embodies–values, emotions, or ideas. I’m most impressed by talent, ambition, strength, and creativity.

Krzysztof Wasylkowski: The first sessions I did were in various rooms at nighttime: friends’ houses, basements, attics, tents, vans, abandoned buildings. Once, we even took photos in a local monastery! As I said, the most important things are darkness and a model who remains motionless. In my home photography studio, the windows are covered with a double layer of black, polypropylene backdrops. They are velcro-fastened. Sometimes, we have to repeat a shot to get it just right (in the case of movement, for example).

Phoblographer: How do your own emotions or moods influence your approach to light painting, if they do? For example, will a photo created during a day when you were calm feel different from one you made when you were energized?

Krzysztof Wasylkowski: ​​How my model and I feel on the day of the shoot–and our relationship to one another–has a huge impact on the final result. Every project is an exchange of energy between people. I find that my photoshoots are similar to therapy. It is a kind of ritual. We bring with us our perceptions of the world, and we explore visible and invisible energies. And that’s the point! I find that this kind of collaboration and exchange encourages me to look at my art from many perspectives.

Phoblographer: Do you have a memory you can share from a favorite shoot?

Krzysztof Wasylkowski: Yes, I returned to Light Move Festival, the event that inspired me to start photography in the first place. At the festival, my job consisted of creating portraits of the participants and performers. The first day, we took our photos in a darkened little tent–where after two minutes, sweat was pouring down our faces. The next day, we chose a recreational vehicle with all the windows covered.

Finally, we settled on the House of Dreams, which is an art gallery, as our location. It used to be a canteen, so we felt right at home in a room without windows, formerly used to process vegetables. We invited the festival’s participants there, leading them through the dark corridors to a surprise photography session.

Phoblographer: Why is it important to you to create these kinds of magical effects on set, rather than during post-production?

Krzysztof Wasylkowski: It never occurred to me to try to create or mimic such effects in post-production. It is possible, but it’s much more difficult than creating them in real-time. I enjoy the light-painting process because it feels natural. It is the result of my own movements; sometimes, these movements are conscious and sometimes not. Each shot lasts about 20 to 60 seconds to create, and there’s no need to make a lot of changes in post. The photos come out of the camera already beautiful.

Phoblographer: This series is titled Daydream. Have you ever been inspired by your own dreams?

Krzysztof Wasylkowski: This title describes the effect of the pictures themselves. These are the abstract creatures who emerge when we dream. Only, I’ve portrayed them in the real world. A lot of my projects are inspired by my dreams. A performance I worked on called Fractal Seraphim is a great example. It brings to life the vision of a flying angel covered with moving patterns. We performed it at the Light Move Festival. I designed and then projected patterns onto the performer, who was dressed in white cloth shaped like wings. The climate of psychedelic festivals, which awakened in me the desire to enter the world in photography, made me start organizing such events. FRUŃ Freedom Universe Festival, an event we are doing in Poland, is the result of all these experiences.