A creek winds through Shanley Park in the historic town of Granbury, Texas. On this day it reflected tall grasses and the light blue stone of Granbury City Hall. © Randy Ziegler

Don’t worry—you won’t have to carry around a mirror. These images are all about observation and imagination.

Randy Ziegler is a master of hearing the inner voice that, if we’re listening carefully, alerts us to image opportunities. He sees graphic possibilities in doors, windows, benches, bicycles, stairways—and the mirrored scenes we call reflections.

His take on reflections is a 50-50 split: is he going to show us any of the reflected subjects or limit the photos to only the reflection? We decided to talk with him about the latter because we like a bit of mystery in the mix, and in discussion he came right out and said it: “I generally prefer a more abstract point of view, one that doesn’t pictorially reflect physical reality.” 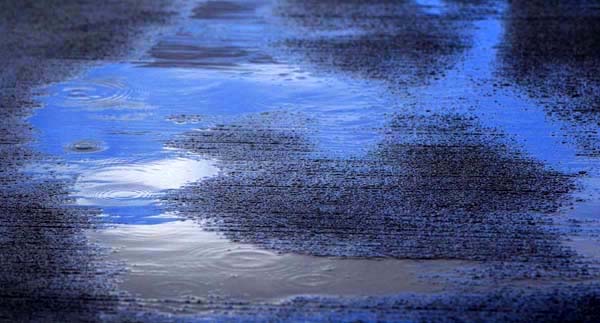 Randy’s driveway after the rain. “I punched the garage door button, the door lifted and there it was—a moment of light and blue sky as the storm clouds dispersed.” © Randy Ziegler

“It all started to intrigue me,” he says, and intrigue led to increased observation and appreciation. “Oh, it’s raining,” became more than just noting a weather condition, and after a short while he didn’t have to look for reflections; he was immediately aware they were here, there, and everywhere, and they were ready to be explored from angles over, under, sideways, and down.

Just Add Water
Sometimes that’s all it takes. Rain on the driveway, a puddle by the curb, a pond, creek, or stream you might once have walked by without thinking twice. But now you notice, and now you get to work, which means immediately sizing up and framing the shot, and then moving around to check out angles and vantage points, while sticking around because reflections change as the light changes.

First you notice, and then you work what you’ve noticed. A first impression of what you can do with a reflection opportunity is just the start.

Structure and Style
Buildings are as likely to be Randy’s subjects as bodies of water, and when his subject is a structure the photograph is likely to be an exploration of patterns, designs, layers, light, and sky.

Often he’s immediately attracted because he knows what he wants an image to look like. “I can pre-visualize it,” he says, “but the beauty happens when I bring the camera up to my eye—that’s the magical moment, when I can see the colors and textures in patterned layers. It’s like a revealed kaleidoscope.” 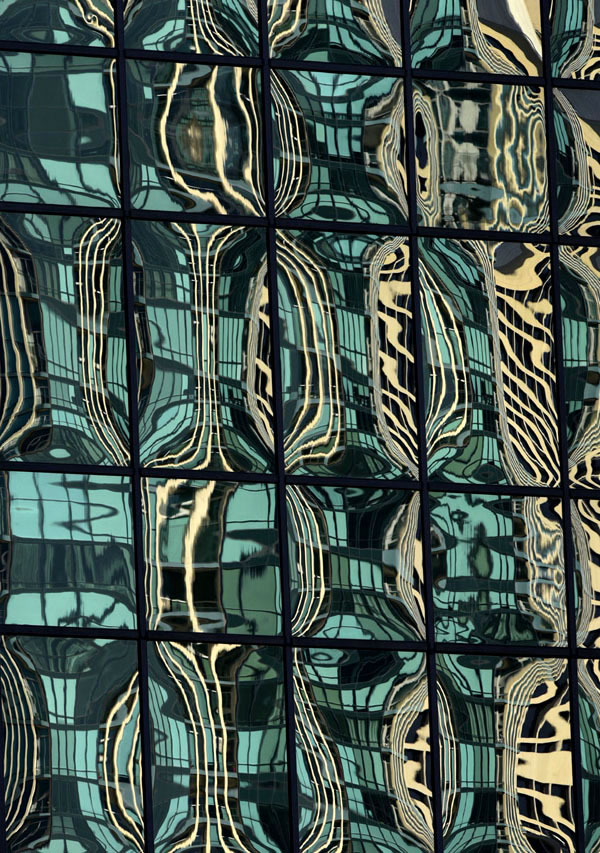 A stack of three downtown buildings in Fort Worth, Texas, prompted this image. The tan reflection patterns are from a multi-story parking garage across the street; the green color is another building reflecting in the glass of the first structure. © Randy Ziegler

And then there are the times when the subject takes him by surprise—like the reflection he spotted in the shiny door of a Ford F-150 pickup. Call it unexpected magic.

The Tech Notes
It pretty much comes down to this: there’s no right way, no wrong way; just your way. Here are some of the elements of Randy’s way.

“When I’m photographing water reflections, settings matter,” he says, “because the breeze, the light, and the way I want the water to look is important.” His experience allows him to call the shot before he takes it—”I know what shutter speed I need to get the effect I’m looking for, and I know when to shift the speed for a different look—maybe more abstract, maybe more literal.” 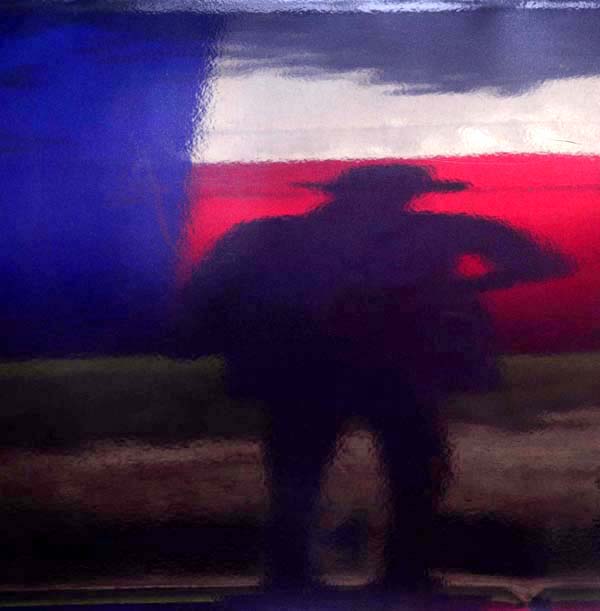 “I was teaching a workshop based on how to elevate seeing, and this is what I saw while the students were shooting other things on the National Day of the American Cowboy at the Fort Worth Stockyards.” The cowboy’s shadow and the giant flag of Texas are reflected in the door of a pickup truck. “I had to shoot fast—if that man moves, there’s no picture.” © Randy Ziegler

He shoots most often with his camera set for either single-sensor or five-sensor-array autofocus. That way he’s always in charge of the spot or the section where the focus will be; the AF is precise, but it’s not making the decisions.

His choice of composition and angle is most often directed by his desire for “maximum saturation in the image of color or movement or pattern. I’m trying to get the maximum impact out of the scene, and if that means moving a bit to the left or angling the camera slightly, or zooming the lens.” 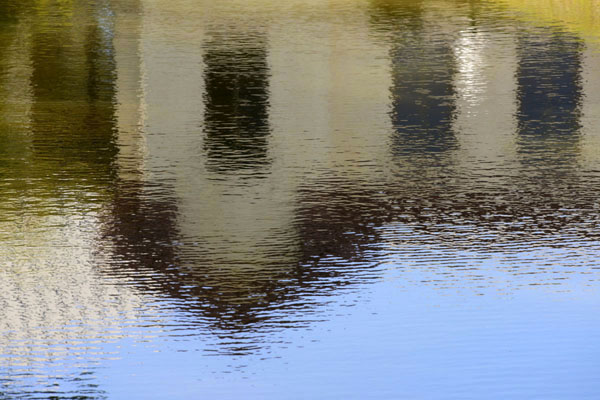 You might not think a government building in downtown Granbury would be a prime location for photos, but the fact that a creek runs through town changes that perception. The building was in shade on an otherwise bright, blue day, adding a somber tone to Randy’s Monet-like interpretation. © Randy Ziegler

He likes to shoot reflections with his 70-200mm lens—”a favorite walkabout lens.” He also uses a 300mm and, to compress the image, a 500mm. “Compression often adds more mystery to what’s going on as the patterns touch or overlap,” he says. “And the long tele lenses tend to limit distractions from the frame—I call it dumping the extraneous—while emphasizing and drawing attention to colors and patterns.”

His reflection photos are always hand-held. “I need freedom of movement. A tripod would be too limiting, and frankly it would take away from the spontaneous fun of the whole thing.” 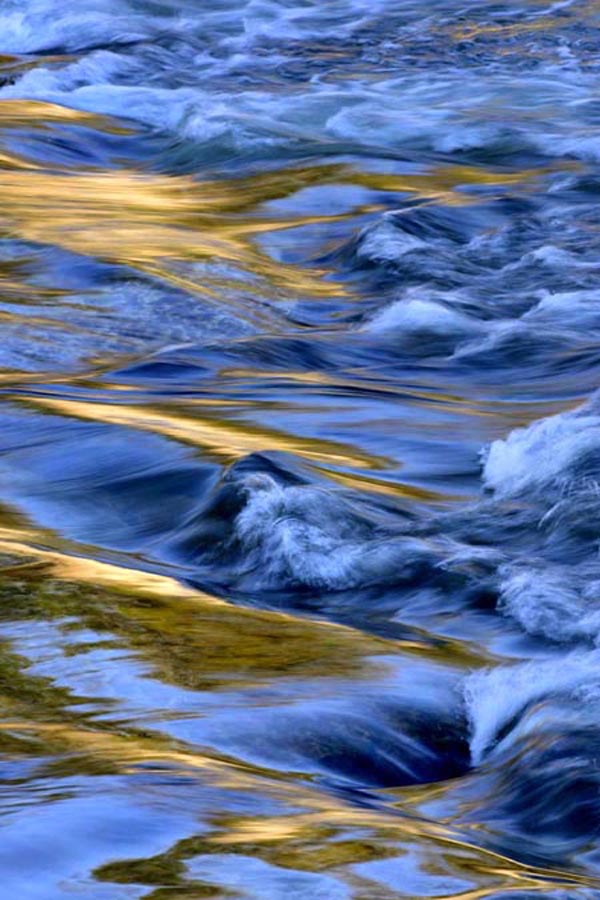 Blue sky reflects on the waters of the Paluxy River in Dinosaur Valley State Park, Texas. A sandy cliff in sunlight on the opposite bank of the river contributed the golden highlights. Randy slowed the shutter speed to 1/13 second to add emphasis and drama to the water’s flow. © Randy Ziegler

What also helps with spontaneity and opportunity is the flip-out LCD screen on his DSLR. “What I appreciate as I get older is not having to get on my knees or my stomach anymore thanks to that wonderful screen.”

Summing up, reflections are everywhere, they’re happening all the time, and they make for intriguing photos. You can make a case that art provides revealing, often unexpected and interpretive views of the familiar. But the problem with the familiar is that it’s so familiar we don’t even notice it. So if Randy’s images have prompted you to reflect on reflections, start out by being on the lookout for colors, patterns, plays of light, and the new forms reflections create. With observation and imagination, you’ll pick up on the possibilities.

You can find more of Ziegler’s great work on his website.