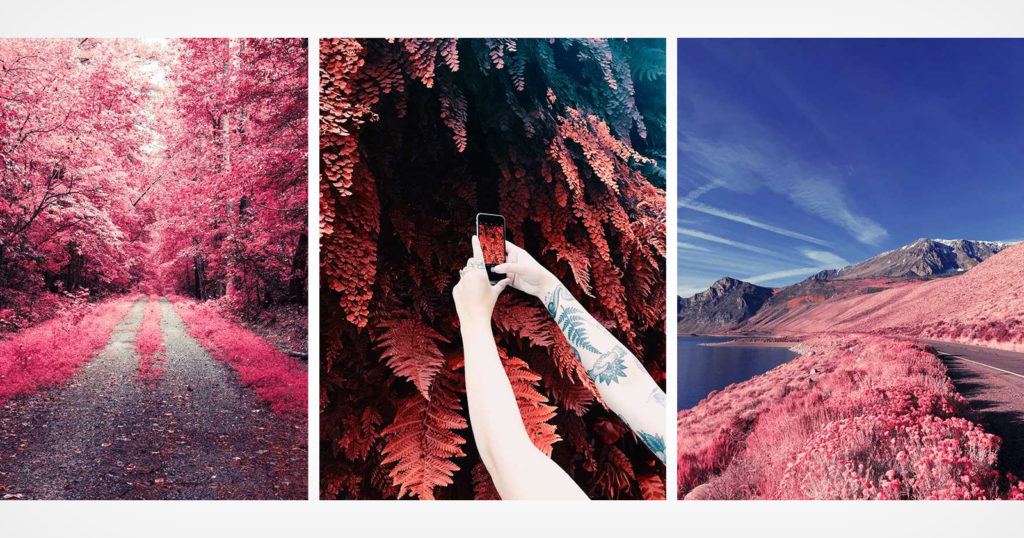 VSCO has announced three new infrared filters — two color and one black and white — that were originally shared with the VSCO community in early June but are launching publicly today.

The new filters are “simulated infrared filters” and give photos the look as though they were captured on an infrared sensor. IR photography refers to light that is beyond the spectrum of electromagnetic radiation that humans can see, although they can feel it as heat. The warmer something is, the more infrared radiation it emits, which is why this type of photography has applications in science, medicine, astronomy, and more — as VSCO explains in its press release.

Color IR film was originally developed by Kodak for military surveillance use in the 1940s which made it easier to spot hidden targets. The film converted invisible IR light into a pink or red color that was noticeable in an image, which resulted in bubblegum pink forests and crimson red plants all while keeping the rest of the landscape ordinary looking.

Later on, IR film was released as a consumer product in the 1960s — becoming especially favored during the emerging psychedelic movement — and was used in creating iconic album covers for artists, such as Jimi Hendrix, Frank Zappa, and Donovan. Photographers, such as Richard Mosse, who documented the conflict in the Democratic Republic of Congo, also embraced this type of film as part of his work.

Although Kodak’s color IR film is now discontinued, it still appeals to many photographers who remove the IR blocking filter in digital cameras to create other-worldly images with striking colors. To replicate this type of result, VSCO explains that its IR filters are an approximation of the most common visual features of real IR photos without actually having access to IR information. This means that greens and yellows are turned to pink and red, blue skies are darkened, and brightness is influenced by the red channel.

The first filter is built with landscapes in mind, covering a large spectrum of greens and yellows found in plants. This filter is unsuitable for portraiture as it affects skin tones, which is why VSCO has developed the second filter which allows users to preserve natural skin tones while still making the most of IR filter effect for the rest of the image. Also, the filter strength slider in the app has been designed to move between pink greens and red greens to capture the full look of IR photography.

The third filter is a monochrome one, which turns plants and greens pale white while simultaneously darkening the skies, resulting in more dramatic landscape images. For this filter, the strength slider adjusts the brightness of the IR look on plants.

Users will be able to apply these filters to their images in the VSCO app. Examples of early-access images uploaded by users with the VSCO IR filters applied can be seen on the VSCO press release.

This Galaxy is 10 Billion Light Years Away, Visible Through a Cosmic Lens

The Toyko Olympics Kicked Off With an Impressive Aerial Drone Display

Drone Pilot Spots and Saves Man Being Attacked by Shark