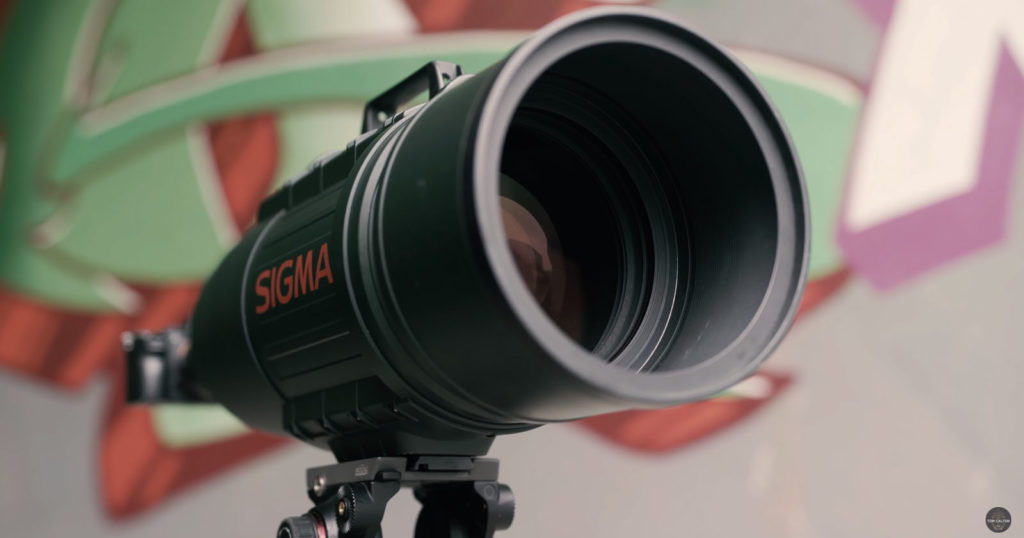 How does the legendarily heavy-duty Sigma 200-500mm f/2.8 EX DG lens translate to use for portraits today? What about when combined with teleconverters on a Sony Alpha 7 Mark III?

Colloquially known as the green monster, its legendary size has been the center of conversation for some time, including some hilarious customer reviews on Amazon. Now thirteen years old, the large Sigma lens — which weighs in at 15.7 kg (34.6 lbs) — is not exactly known as the go-to glass for portraiture.

However, photographer Tom Calton, based in the United Kingdom, was entrusted by Sigma shoot with it for a day and decided to capture some urban portraits to see if this older, giant DSLR lens is still usable with modern mirrorless equipment.

The lens was the world’s first ultra-telephoto zoom lens that allows shooters to use a maximum aperture of f/2.8 at 500mm focal length. It comes with a built-in LCD panel that shows the current zoom and focus distance and both the focus and zoom mechanisms of the lens are driven using its own internal battery-powered motor. It also has a rear drop-in filter compartment that houses 72mm filters.

Users can transform the focal length to shoot as much as 1000mm at f/5.6 with the help of the attachable 2x teleconverter that comes included with the lens. Doing so makes it an incredibly long-reaching lens that still offers the use of autofocus. Unfortunately, this particular lens with an EF mount was not supported by Calton’s Sony Alpha a7 III autofocus, and for one reason or another, he wasn’t able to get the autofocus to work and was limited to manual focusing instead.

With the help of a Sigma MC-11 Canon EF to Sony E-mount converter, Calton mounted the lens and attempted to attach it to a tripod. As heavy as the lens is, it’s practically impossible to shoot handheld so a tripod or a helping friend’s shoulder is a must.

At both 200mm and 500mm at f/2.8, the lens generated soft bokeh in the background of the model’s portrait and full-body shot. Using the teleconverter to shoot at 1000mm at f/5.6, Calton had to stand farther back from the model to get a full-body shot of her — 90 meters (295 feet) between them to be exact. The shot didn’t quite have the same smooth bokeh, though, thanks to the more stopped down aperture and despite the added throw.

Finally, to test the limits, Calton used a Super 35mm crop setting which gives an effective focal length of 1600mm. Not the easiest focal length to manually focus with, it still produces a pleasant portrait image.

Undoubtedly, this lens — which comes with an eye-watering $26,000 price tag — is impressive in its size and performance but will most likely never find itself in the gear bag of most photographers thanks to both its cost and its ungainly size.

More of Calton’s photography videos can be found on his YouTube channel and his work can be seen on his Instagram.