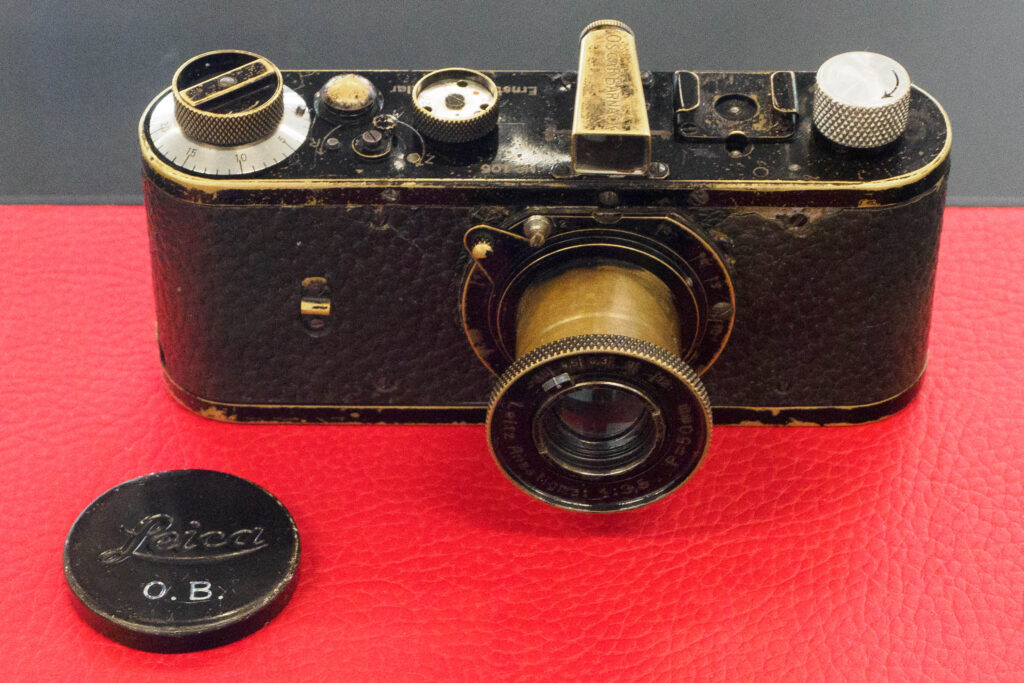 Leica cameras aren’t exacly known for being cheap, indeed the latest Leica M11 rangefinder will set you back £7,500, and that’s before you even add a lens. But how about £10.25 million? That’s now much an ultra-rare vintage Leica sold for at auction in Wetzlar on Saturday 11th June. And that’s just the hammer price, excluding taxes and fees, which will add a hefty amount extra on top. I was there watching among a rapt audience, as the bidding unfolded and the record was set.

To the untutored eye, the new record-holder doesn’t even look like much. I was lucky enough to be able to view it up-close the day before it sold, and it’s a surprisingly small black camera with a lens that retracts into the body. It’s almost 100 years old, with a patina that reflects its age. Much of the original black paint has worn away to reveal the brass underneath, and a few parts have even been replaced by a previous owner, whose name is engraved on top of the viewfinder.

However, this isn’t the kind of old camera you might find, forgotten and abandoned, in your grandparents’ loft. It’s an ultra-rare Leica 0-series, and that owner’s name belongs to its inventor, the legendary Oskar Barnack. Oh, and it still works perfectly. To committed collectors, there’s no more desirable planet on the market.

So what does ‘0-series’ mean? This camera is one of just 20-odd prototypes made by Leica shortly after the end of the First World War, to test the market’s appetite for a pocket camera that used 35mm film. The experiment proved a success, and the Leica 1 became the first practical camera to use what became the most successful film format of all. Indeed Barnack’s design still has major repercussions today, as the 36x24mm negative size that he chose is now known as ‘full frame’.

Leica ‘O’ series no 105 – Oskar Barnack’s personal camera, and the most expensive camera ever sold at auction

Of those early Leica 0-series cameras, maybe a dozen survive. Another one sold for €2,400,000 in 2018 – the previous record for a camera sold at auction. But with Barnack’s name attached, this one is even more special.

To explain just why this camera is so desirable, I turned to Amateur Photographer’s vintage camera guru, and committed collector, John Wade. “Among the many things collectors look for when buying a camera, two major factors stand out: rarity and provenance.” he explains.

“This camera has both by the bucketload. It’s super-rare because it is one of only a handful of pre-production prototypes that led to the launch of the Leica I in 1925, the camera that made 35mm truly viable and therefore kickstarted the most popular film format ever.

Oskar Barnack’s camera was sold at auction at Leica’s headquarters in Wetzlar, Germay

So this is a rare and important camera in its own right. Add its provenance and you begin to see why the auction estimate is so high. Because this actual camera belonged to Oskar Barnack, the man who invented the Leica.

Is it worth the money? Well, yes and no. Speaking as a camera collector of many years standing I personally would not buy it, as I am not that much interested in Leicas. But if I was a serious Leica collector who was also seriously rich, I would move heaven and earth to buy it.”