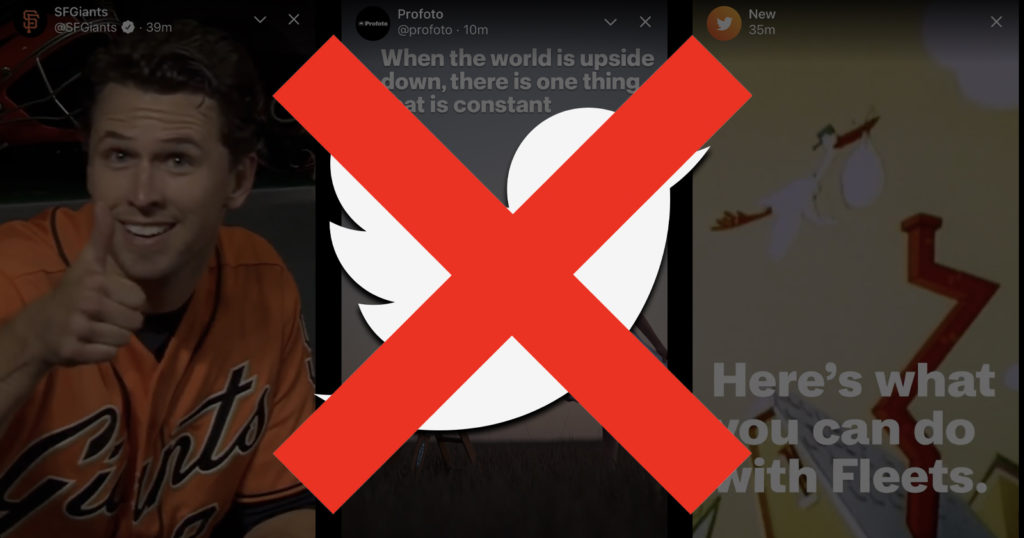 Twitter has announced that it will shut down Fleets citing low usage. Fleets were originally launched in November of 2020 and were designed to compete with Instagram and Snapchat stories.

As stated on its blog, Twitter is planning to replace the space taken up by Fleets at the top of the social media app’s feed with Spaces — its live audio chat rooms designed to compete with Clubhouse — by August 3rd. Additionally, the “compose tweet” button will receive an update that will add more camera editing features that were available for Fleets, such a text formatting and the ability to add GIF stickers over photos.

“We built Fleets as a lower-pressure, ephemeral way for people to share their fleeting thoughts. We hoped Fleets would help more people feel comfortable joining the conversation on Twitter,” Ilya Brown, Twitter’s Head of Product, Brand and Video Ads writes. “But, in the time since we introduced Fleets to everyone, we haven’t seen an increase in the number of new people joining the conversation with Fleets like we hoped. Because of this, on August 3, Fleets will no longer be available on Twitter.”

Twitter will instead focus what it learned from Fleets into making other ways for its users to join conversations and discuss what is happening. Twitter doesn’t call Fleets a failure, but rather an admission that it hasn’t quite figured out how to get people to tweet more.

we're removing Fleets on August 3, working on some new stuff

we're sorry or you're welcome

Brown says that the hope for Fleets was to reduce the anxieties that hold people back from tweeting more but instead found that the feature was mostly used by those who were already tweeting to amplify their own tweets instead.

“We’ll explore more ways to address what holds people back from participating on Twitter. And for the people who already are Tweeting, we’re focused on making this better for you,” he continues.

Twitter rolled out Fleet ad testing not long after Fleets were launched, and says that this was its first attempt at exploring full-screen, vertical format ads. It was an experiment and Twitter hasn’t made it clear if users can expect to see these kinds of ads again in the future.

“We’re evolving what Twitter is, and trying bigger, bolder things to serve the public conversation. A number of these updates, like Fleets, are speculative and won’t work out,” Brown says. “If we’re not evolving our approach and winding down features every once in a while – we’re not taking big enough chances.”