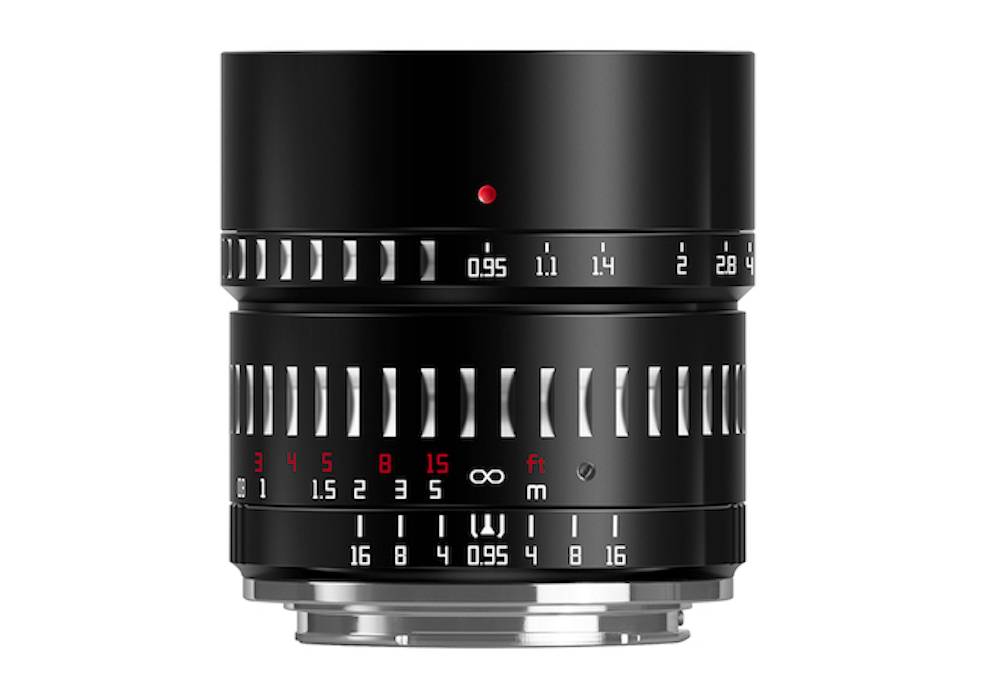 According to the TTArtisan website versions of this prime lens can also be used with Canon M and RF mounts, Nikon Z-mount, Micro Four Thirds mount (for Olympus and Panasonic cameras) and L-mount cameras.

An earlier TTArtisan 50mm F0.95 lens was produced in 2020 with a different optical construction, so it’s important to note the optical make-up (see below) of this newer lens.

When the 50mm prime is used with APS-C format mirrorless digital cameras, it provides an equivalent focal length of  75mm.

The 50mm lens is said to be well-suited to everyday shooting with subjects including portraiture, street, nightscapes, landscapes and reportage.

A fast f/0.95 maximum aperture suits photographers who wish to work in low-light conditions and also offers control over the depth-of-field.

The lens’ optical system consists of 8 elements in 6 groups.

A multi-layer coating has been applied to individual elements and reduces flare and ghosting in order to produce greater contrast and colour accuracy when working in strong lighting conditions.

A 10-blade diaphragm is said to contribute, ‘a pleasing out-of-focus quality when working with selective focus techniques.’

The all-metal lens barrel has silver indents, which give the lens a more vintage retro look, and features an engraved depth-of-field and focus scales.

The aperture ring is stepped with the right amount of resistance and click, marking on full stops from F/0.95 to F/16.

Additionally, a metal lens mount also helps to offer increased durability between the lens and camera.

Unlike a traditional ‘squeeze-type’ lens cap, the TTArtisan 50mm F0.95 features a screw-on metal lens cap, which is said to be ‘quite convenient to mount the lens cap tight with only one spin.’

The lens weighs about 411g and is said to be compact and easy to handle.

TTArtisan claimed, ‘The strong ability of bokeh display of the F0.95 aperture spreads the back (front) scene like a cream, giving a high-level visual enjoyment. The looming dots of light make the atmosphere of the picture so mesmerising. In low-light environments, shooting is often accomplished by sacrificing image quality by increasing the ISO and reducing the shutter speed. At this time, the large aperture of F0.95 can solve the problems caused by low light and brings you to experience the beauty of low-light creation.’

You can watch a short video on the TTArtisan 50mm F0.95 lens below…

The TTArtisan 50mm F0.95 is currently listed for pre-ordering on Amazon for around £219.

TTArtisan 50mm f/1.2 lens out in silver for Leica L-mount