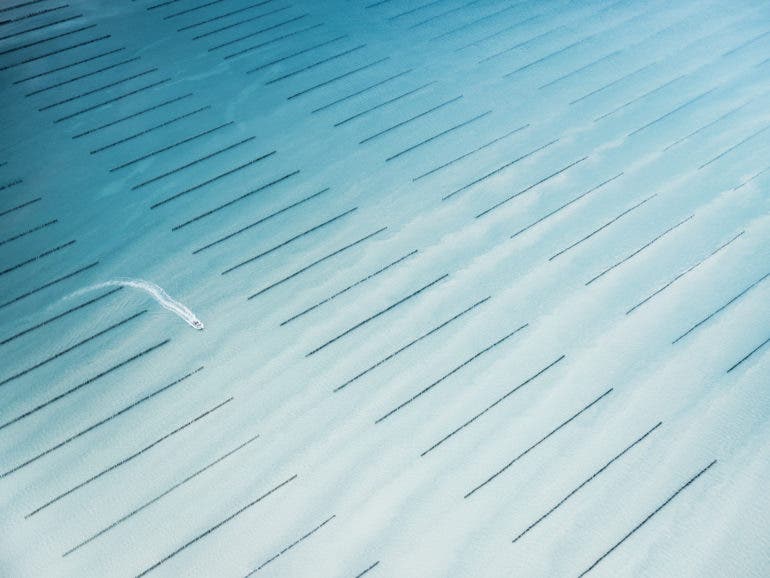 All images by Tom Hegen. Used with permission

“I don’t judge the places I photograph,” says aerial photographer, Tom Hegen. He adds, “I see myself more as an observer, documenting those places, providing an overview and insights on our relationship with nature.” His work focuses on the connections between people and nature, especially the impact on landscapes caused by human intervention. In his Oyster Farm series, Tom takes a look at how humans farm food even in some of the most improbable places one can imagine.

We’re probably at an all-time high when considering the strain mankind is placing on the Earth’s resources. The ever-growing demand for seafood has led to some of the most unconventional food production practices we’ve ever seen. With the global consumption of seafood more than doubling since the 1980s, fish farming now produces more metric tonnes of seafood than those caught by trawling the seas. Can such practices help sustain the population of fish in the oceans? Tom Hegen examines the impact of mankind and its farming practices on our planet.

The Phoblographer: Tell us how a bit about yourself and how you got into photography.

Tom Hegen: Around 10 years ago, I started off with classic landscape photography but soon realized that those sugarcoated shots do not represent their real environment. I began to question the term ‘landscape’ as known from ‘landscape photography’. ‘Land’ is a word of Germanic origin, and the roots of the suffix ‘-scape’, German ‘-schaffen’ refers to the verb ‘shaping’. So landscape in the sense of landscaping refers to an activity that modifies the visible features of an area. As a consequence, I now focus on landscapes that show the impact of human presence on earth. It still is a kind of landscape photography but with a more conceptual approach and documentary character to it.

The Phoblographer: Did you shoot these images while flying overhead, or did you use a drone for the series? Please take us through the gear used for this in detail.

Tom Hegen: This series was shot by using a heavy-lift drone. A 100 mp medium format camera is attached to the drone, and I can control the drone and camera with a remote on the ground. I also get a video signal on a tablet to see what the camera sees. I use various tools to create my projects; sometimes it’s drones, sometimes helicopters or small airplanes.

The Phoblographer: What is it about the gear you use that you feel helps you get the photographs you want?

Tom Hegen: For me, all those things like drones or helicopters are just tools that give me the possibility to get my camera into the right perspective. But it’s never about the technique I’m using, it’s only about the results. I’ve even been shooting projects standing on a bridge, looking down. Cameras are very capable these days and you can take a bad photo with the best camera in the world but also a great photo with your smartphone. The result, concept and story is what counts for me.

The Phoblographer: What kind of health and safety measures does an aerial photographer need to consider before going to shoot?

Tom Hegen: That really depends on what you are doing. But wise to mention that aerial photography is not like staying with a tripod on the ground, waiting for the perfect moment. There is much more planning and preparation involved. I spend a lot of time finding pilots in the places I want to photograph or instructing them on what I would like to achieve. You also have to take certain safety precautions like wearing a belt or making sure that everything you bring on a flight is somehow attached to the aircraft so really nothing can fall down. Motion sickness can also be a problem when you fly with a ground speed of 100 miles per hour, circling an object and looking through the viewfinder on 120mm. That can be very distracting and [it may end] the shoot sooner than expected. In terms of taking the photos, it’s wise to keep the shutter speed as fast a possible to get sharp images. It’s a game between shooting wide open, using the right iso setting and keeping your camera steady.

The Phoblographer: What inspired you to do a series on these oyster farms?

Tom Hegen: I am interested in the concept of the Anthropocene. It is a term used by scientists which theorize that humans, in recent centuries, have become one of the most important factors influencing the biological, geological and atmospheric processes on earth. Some of the most significant changes in the Anthropocene include climate change, the ozone hole in the Antarctic, rapidly rising sea levels, and landscape changes caused by river shifts or the degradation of raw materials. In my photography, I explore the origin and scale of that idea to understand the dimensions of man’s intervention in natural spaces and to direct attention toward how humans can take responsibility. Aerial photography is a compelling way to document those interventions because it makes the dimensions of human force on earth visible. The Oyster Farm Series is an impressive example of how we as our species can grow food even in impassable terrain. With my photo series, I try to give a complete look into the chain of consumption.

The Phoblographer: Are they all shot at a single location or across multiple such farms?

Tom Hegen: The Oyster Farm Series was shot in various locations along the northwestern French Atlantic coast. It’s an area with one of the broadest intertidal zones in the world. When the tide pulls out the water from the shore, the beaches reveal rows and rows of oyster beds. The combination of mild summer climate and the fresh seawater renewed by the tide several times a day makes it a perfect nursery.

The Phoblographer: How long did it take to photograph the whole series, and what challenges did you encounter during this?

Tom Hegen: I visited the area for about two weeks. One of the greatest challenges for this project was the timing with weather, light and tides. The oyster farms are only visible during low tide, which remains for about three hours a day. I shot this project in winter 2020 during a lot of stormy and rainy days. That made it even harder to find the right gap for shooting these locations. It was a lot of waiting for the right moment, as it is with photography!

The Phoblographer: The time of day would have been critical to ensuring that you could photograph the farms without much reflective interference. Did this involve a lot of trial and error?

Tom Hegen: Yeah, as mentioned before, this project was very challenging to shoot, especially when you consider the short time frame each day and the story weather conditions I had to face. But in general, I prefer bright, overcast skies to shoot my projects. It makes a very soft contrast on the ground and reduces reflections of the sun in the water.

The Phoblographer: Most of the rows seen in your images are in closely located pairs. What is the significance of such an arrangement, and how many oysters does each row house?

Tom Hegen: After baby oysters matured in small nursery pods, the farmers put them in mesh bags and place them out on the shallow coast. The tide constantly brings freshwater to the shells, which helps them to grow. I can’t tell you how many Oysters are in one bag but are placed there by hand and seem to be quite heavy. I assume that a bag contains around 100 – 200 Oyster[s].

The Phoblographer: Did you get an opportunity to photograph the farms at eye level too? How far out into the ocean are these farms located?

Tom Hegen: I saw these Oyster banks also from ground level but didn’t take any photographs from this perspective as I wanted to show them from a more elevated, more abstract perspective.

The Phoblographer: Many images show a dry, barren sea bed, and others show plains of green with what looks like tractors among the rows. Tell us about this, please.

Tom Hegen: The cages full of shells are taken to the oyster beds, four to five kilometres out in the sea, stacked in racks, and left for over two years while the oysters grow. The bags are shaken and turned at regular intervals so that the oysters do not stick together. Farmers use boats and tractors to reach the oyster banks during low tide.

The Phoblographer: Fish farming has come under the radar recently due to unsustainable practices by a lot of farms worldwide. What would you say to those who feel oyster farming is also part of the same problem?

Tom Hegen: The Oyster Farms are just another [example] of how we as humans have found another way to get food and make a profit with the resources our planet has to offer. As far as I can tell, I don’t think that this practice is unsustainable as the shells provide habitat for other species. But at the same time, it’s an animal that only lives for consumption and the Oyster beds have an impact on the coastal waters. I don’t judge the places I photograph, I see myself more as an observer, documenting those places, providing an overview and insights on our relationship with nature.

The Phoblographer: How long does the whole process take until the oysters are ready to be sold? Will additional phases of oyster farming be featured in a future series?

Tom Hegen: The oysters are around two to four years old by the time they are ready to be eaten. At the moment, this project is complete for me.

All images by Tom Hegen. Used with permission. Visit his website and his Instagram page for more