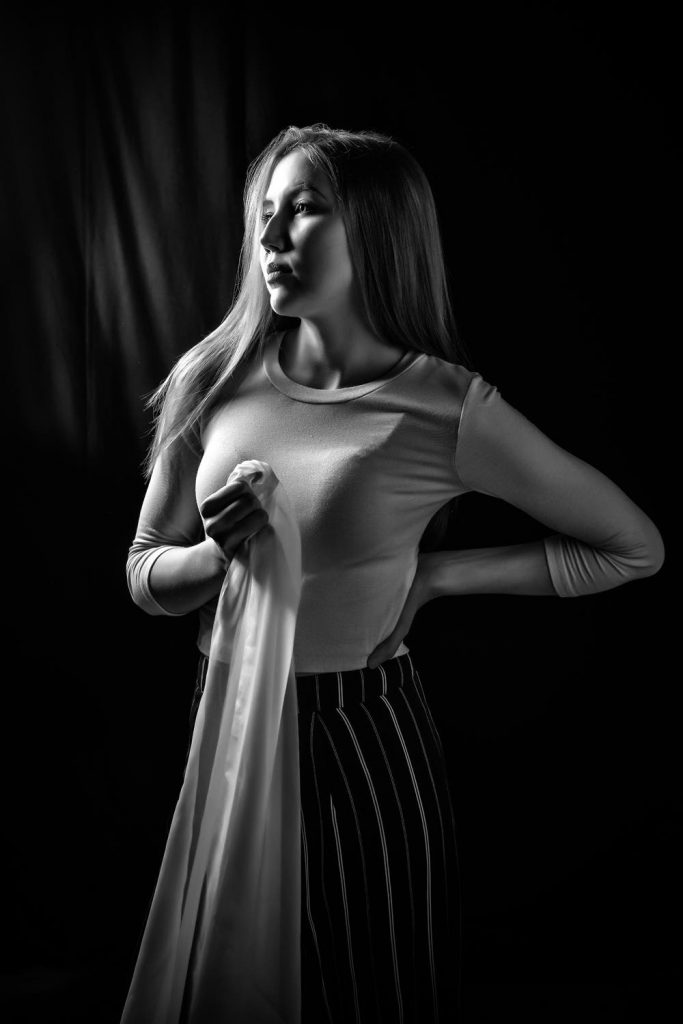 “I really wanted to give a shoutout to all the amazing people I’ve worked with over the years,” explains Timothy Hiatt when talking about the release of his new book. He adds, “they mean the world to me…they’re the ones who make the images a helluva lot more than me.” In a body of work dating back to 2009, Hiatt is now offering everyone a look at his glittering career. From subtle portraits to full-blown conceptual shoots, his book, Muses, has everything! We spoke to Hiatt to learn more about his new release and why now was the right time to offer it to the world.

Phoblographer: Why did you feel it was the right time to release this retrospective book of your work?

Timothy Hiatt: Because I’ve had a lot of free time over the past year for some reason. Plus, I’ve always had it in my mind to do something like this. The kind of stuff I usually do, and that I’m somewhat known for lacks a certain creativity. I don’t mean that in a bad way, mind you because shooting music or events or red carpets provide their own sort of challenges. I love those challenges, but it’s a vastly different situation going from shooting something in which you really have no control over to creating something from scratch then taking the idea from planning to execution.

Since I haven’t been able to do the kind of work I normally do to keep the lights on recently, I wanted to use the time to focus on the kind of stuff I do to keep the creative blood flowing, and hopefully, something nice would come out of it.

Photographer: Talk to us about the selection process. How did you decide which images made the final print, and how long did it take?

Timothy Hiatt: It depends on how you look at it. It only took a couple of weeks to narrow them down from the time I decided to move forward with the project. But in reality, I’ve been living with the majority of the shots for years, so I had a fairly clear idea of which ones should make it.

I also wanted to make sure the book had variety. The hardest part was going over the shoots I’ve done with people I’ve shot with many times. There are a couple of people I’ve worked with so much that I could do a whole book on them alone. I also reached out to everyone I could to get their approval of selections. Only one shot that I really loved didn’t make it in because of that, but that’s totally ok. I always tell everyone I work with that if they don’t like a shot for any reason, even if it’s my favorite shot I’ve ever taken, I’ll make it go away.

Phoblographer: The book includes work dating back to 2009. Can you share one or two of the most enjoyable shoots you’ve done during that time?

Timothy Hiatt: I’ve got so many, and I hope no one will be offended if I don’t include their particular story, but here are just two. The first one may not technically fall into the “enjoyable” category, but the results do, and it’s the kind of shoot that you look back on when reminiscing and say, “You remember that time?”

A few years ago, I went to New Mexico to see a couple of my great friends and do some shooting with their daughter Ali. We did several setups over the course of a few days, and there was one specific setup that needed a bit more advanced planning and location scouting. So earlier in the day, Chuck (Ali’s father) and I went to search for the right place. We came across this great old car, from the late “50’s – rusted out, run down – clearly had seen better days. Best of all, it was unlocked so I could set up an accent light inside. We made a note of it to come back later in the evening.

Well, sure enough, ten minutes later, a police officer shows up. He asks us what we’re doing, we tell him we’re just doing a photoshoot, and this is a great location. He sees we’re not up to anything nefarious and radios back in to dispatch and tells them he’s on-site, and they could tell the guy who called it in that he can come over. The officer finished by telling dispatch – “and tell him to come unarmed.”

We see the guy coming over, so the officer meets him about halfway. As they’re doing their back and forth, I see the man who had called the police take a gun out of his coat and put it on a fence post. Then they both came back over to us. Turns out we were actually on private property. I explained to the guy that I didn’t know it was private property, told him what we were doing, and if he had any problem at all, we’d pack things up and leave, no hesitation. I gave him my card and told him that if there was even a blade of grass out of place after we were done, just let me know, and I’d take care of it.

The upshot is he turned out to be ok with it, and we went on to get the shot that made it into the book. The moral is, be smarter than me (which is really quite easy to do), know if your location is private, and get permission beforehand to avoid potential gunplay!

The second one is from last year. I hadn’t shot anything at all for a couple of months and was looking for ways to keep active and keep the shooting blood flowing. To that end, I went back to my hometown for the first time in about 15 years (for something not funeral-related) with the idea of working on a project that had nothing to do with portraiture.

But me being me, I reached out to a friend to see if her daughter Kendall might be interested in doing some shooting while I was there. Luckily she was, and so we set up a day to shoot around the area. I had a few ideas but didn’t really know where to do them.

It turns out her grandmother knew a place, so we went by, took a look at it, and it was fantastic. It was a building that I had been by on practically a daily basis during the entirety of my 18 years there, but I had no idea what was inside. The second floor consisted of a huge old meeting hall and performance venue now being used as a storage space containing stuff dating from the present day to back to the late 1800s. It was the exact amount of run-down and old history to contrast with the youthfulness of Kendall, and I was blown away that it had existed right under my nose.

We did several setups there, including one with this incredible old safe from the 1870s, which made it into the book. That shoot was exactly what I needed at the time, and Kendall was exactly the right person. It’s one of my favorite shoots I’ve ever done, and it made me think about what else I had ignored about the place I grew up in. It’s also why I put one of Kendall’s shots from that day on the cover.

Phoblographer: How has the gear you use evolved over the past 11 years?

Timothy Hiatt: Camera wise not that much. I’d been shooting with the Nikon D700 since it came out, and never really saw any reason to upgrade. I thought it was the best digital camera to come out, and the “upgrades” really didn’t offer me anything I already had.

I’ve since moved up to the D850 and Z7, and in the past year I’ve gotten back into film photography – something I haven’t done in about 20 years. My main camera for portraits is the Hasselblad 500C/M. So I guess my gear has sort of devolved in a way!

The studio lighting is probably the biggest changes I’ve made. I now use battery-powered heads exclusively, as well as several constant lighting pieces.

Phoblographer: How do you feel you have evolved as a portrait photographer throughout your career?

Timothy Hiatt: I think I’ve gotten better as a director. I’ve never been overly good at conveying what I have in mind. I still rely heavily on letting the person I’m shooting find their place, then capture what they do. But I’ve got better at explaining the situation and the feel I’m looking for in order for them to work within that space. I still have a way to go, though.

Phoblographer: Talk to us about the book materials. Who is printing the book, what kind of paper are you printing on, etc.?

Timothy Hiatt: It’s being printed by Lulu on 80lb paper, and I was surprised with how good the quality is for the price. Since I didn’t want to do a huge initial order and have a bunch of copies sitting around gathering dust (not that I could afford to do that anyway), I’m doing runs as I get orders. The turnaround time is relatively short, though, and it’s being offered in both hardback and softcover versions.

Phoblographer: For you, how does seeing your work in a book compare to looking at it on your website/socials?

Timothy Hiatt: The difference is night and day. I’ve always been a huge proponent of print media, dating back to my time as the AD of a magazine. There’s just something infinitely more satisfying about having a tactile item you can hold in your hands, rifle through at will, and really go over what makes a shot good or bad.

The images are clearer, and the definition more pleasing. It’s the same reason vinyl is making a comeback. You take the time to look through and appreciate. People don’t do that with a small image on a screen or phone that can be immediately shuffled through. They don’t even give it a second thought because they’re on to the next image.

Phoblographer: You’re well known for music and concert photography. How has it felt not being able to do what you love because of the pandemic?

Timothy Hiatt: It’s been rough, but in all honesty, I’d kind of backed off from it a bit even before the pandemic. That’s just because it’s been steadily declining in recent years with having to deal with a lot of publicists who seem openly hostile toward photographers and who think that we’re only trying to get shots of their artists that make them look bad.

It’s what I call the “TMZing” of the business. Don’t get me wrong; there are loads of publicists that are great at what they do and know that any real photographer would not let a shot that makes their client look bad see the light of day. That’s because a shot that makes their artist look bad makes the photographer look even worse. But the publicists who don’t know what they’re doing seem to be the loudest voices in the room right now.

That said, I can’t wait to spend a weekend plowing through a hot and sweaty festival again. And in the grand scheme of things, when so many people have lost jobs, loved ones, or even their lives, not being able to see or photograph live shows is pretty small beer.

Phoblographer: Before we let you go, please write how you feel about your overall body of work in two or three sentences.

Timothy Hiatt: Not bad, could be better, trying to improve with every shoot. Hopelessly lost, but makin’ good time.