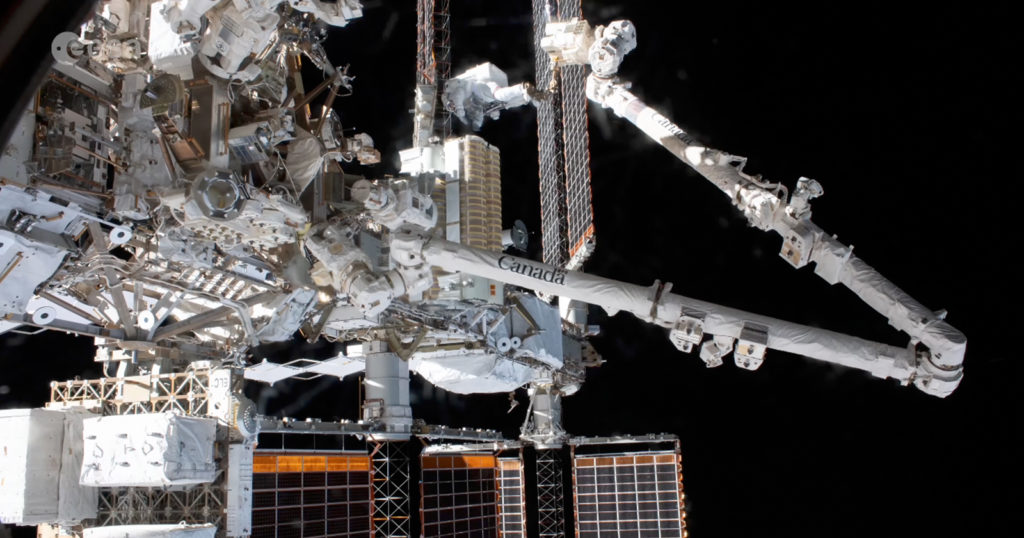 “These arrays, called IROSA for ISS Roll-Out Solar Array, had to be taken from their storage area outside the Space Station and passed from spacewalker to spacewalker to the worksite. There the rolled arrays were to be secured, unfolded, connected, and then unfurled. During the spacewalk, a small technical problem in Shane’s spacesuit required him to return to the airlock and restart his Display and Control Module,” the ESA says.

“This module provides astronauts with continuous information on pressure, temperature, and other vital data during a spacewalk. Though the restart was successful and Shane was in no danger, it delayed the duo’s work, preventing them from completing the installation of the first new solar array as planned. A second spacewalk was done on 20 June to finish installing the first solar array.”

The video above shows scenes from the June 16 spacewalk with Pesquet — who has previously shared some stellar photos taken from space, such as one series that focuses on the waters of Earth and another that excellently visualizes how fast the station moves — attached to the robotic arm and NASA astronaut Megan McArthur at the controls.

“We have to do EVAs, but someone has to keep running the Space Station while we are preparing, spacewalking, reconfiguring, preparing again,” Pesquet wrote along with a video posted to social media. “Aki has been rock solid taking care of the spaceship pretty much by himself, performing all the maintenance and the science experiments, and on top of that he found the time to take timelapses of our little walks outside. The man is a machine!”

A second video posted a few days later shows Pesquet and Kimbrough on their fourth spacewalk together to complete the installation of the first new solar array and to prepare work for the second unit. This video shows the team unfolding the arrays that were rolled into tubes for transport, aligning them, and connecting the data cables as well as securing them to the mounting brackets.

Over 200 experiments are planned during Pesquet’s time on the ISS, with 40 planned by the ESA and 12 new experiments led by the French space agency CNES