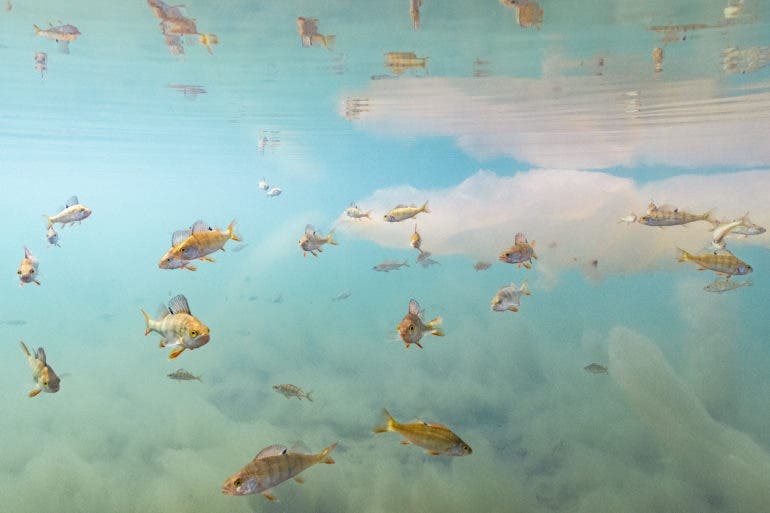 “I found this small lake in my first year of diving,” photographer Tiina Törmänen tells me of this remote and secret place in Finland. “The pink algae was just so weird, and I had never seen anything like it before. That first time, it even felt a bit scary. Visibility was maybe seven to ten meters, so I couldn’t see what was in front of me.” As she swam, long ribbons of rose-colored algae appeared out of nowhere, like the arms of a ghost. As she moved, they broke apart as easily as swirls of dust.

The artist has since returned to that same lake every year, documenting what she finds beneath the surface. This year, she was astonished to discover schools of perch fish, glittering like rays of sunlight among the clouds of algae. Her photographs from the trip, collected in the series Like Flying, transport us to a primorial dreamscape, where time and space–and any sense of “up” and down”–seem to melt into ether.

At a time when our oceans are gravely threatened by pollution and climate change, her pictures feel like an escape into another realm, a strange but beautiful netherworld ruled by fish. To this day, Törmänen doesn’t know where the cotton candy-like algae comes from, what causes it, or what effect it might have on the ecosystem. She’s always been curious. “I asked about the algae in a Facebook group where you can ask anything about nature, and I asked several other people,” she says. “But no mystery was solved.” We asked her to take us back to that lake.

The essential gear of Tiina Törmänen

“I got my gear updated earlier this year, and I have been super happy to have professional photo gear underwater. When you have a pro camera and glass dome, it makes a big difference working in an underwater world. I did not use any additional light for these images.”

Phoblographer: You got your start as a photographer in your teens. Is that right?

Tiina Törmänen: I started photography at 17 years old. Photography was my savior, and today, I see it as my life’s work. I still have all my early film material archived, and I plan to digitize that early body of work and make a book about my life story, how it all began, and what happened in the first place. It is a rough and inspiring story about survival from an abusive relationship when I was underage. I was almost a victim of manslaughter, but I lived. It took years, but I found a way to move past all the hatred and anger. Those experiences also made me who I am today and affected how I see the world.

Phoblographer: How and when did your interest turn to nature and underwater photography?

Tiina Törmänen: I never set out to photograph nature specifically. It just happened as I moved away from the city and found myself surrounded by the landscapes of Finnish Lapland. After almost a decade of shooting northern landscapes, however, I wanted to start doing something new. I had thought about underwater photography from time to time, but it always seemed too complicated.

In 2018, however, all the pieces came together, and I started scuba diving. Finland is called “the land of a thousand lakes,” as there are a total of 188,000 lakes in Finland. Water and lakes are the heart of the Finnish landscape. Even so, the underwater world here felt mostly unexplored to me, especially in photography. I wanted to dive deep into this unseen world.

Phoblographer: What has your journey into that unseen world looked like so far?

Tiina Törmänen: Finland is located in the northern part of Europe, and our waters are cold.  Diving in Finland is a lot more demanding than it is in warm oceans. You need to dive with a drysuit if you want to spend more time in the water; the learning curve is steep, and the gear investment is high. The waters here are also quite bare and not much to see compared to ocean reefs, so many people see them as uninspiring.

Once you start scuba diving, you will soon realize that you need to learn to dive before you can start taking a camera with you. There’s no shortcut; you need to learn how to be a safe diver and master buoyancy control perfectly. I spent a lot of time in my first year practicing my scuba skills. I dove about a hundred times in that first year, mostly in cold waters.

I started technical diving one and a half years ago, and my diving progression has been intense. I dive using a side mount system. I love being in the water; it is very meditative. It clears your head, and you live only in the moment while underwater.

Phoblographer: How did you first find this lake? Is it a popular spot or more of a hidden gem?

Tiina Törmänen: As we have so many lakes and ponds, there are countless places in Finland that haven’t been regularly visited by divers. I look at maps to find potential diving spots–first a topographic map, and then aerial or satellite images. You can spot places with potential from the map and then go and see how they look.

I try to spot areas with turquoise-colored waters. Beneath the surface of every lake awaits a great mystery. The surface only indicates the color of the water and how clear visibility might be. When you go under, you might find something boring or something otherworldly. The only way to find out is to go and explore. That’s how I found this lake as well.

Phoblographer: Do you know why this lake is host to these massive swaths of algae/slime?

Tiina Törmänen: I don’t know, but the most massive algae escalation I’ve seen was during a year when we had a super warm summer. So it seems the warmer it gets, the more algae there is. Last year was more like a normal summer here in the North, and there wasn’t so much of this algae. On the other hand, it might be that this lake is just perfect for this particular algae, as I have not seen it elsewhere in these numbers.

Phoblographer: You first visited this lake three years ago. The first time, there were no living fish in the area, right?

Tiina Törmänen: That first year, I did not find any signs of living fish. I did not go to the other side of the lake to check, but in the area I explored, I found only algae and a few dead fish. I took this photo of a dead fish popping out of the algae slime during that first visit. I call it “resurrection,” and it is one of my all-time favorite photos.

Phoblographer: What was it like to witness the return of all these living fish this year?

Tiina Törmänen: At first, I wondered if there wasn’t any algae at all this year, as I immediately saw a school of tiny fish near the shore as I entered into the water. I thought, “Okay, there are little fish, so there have to be adult fish as well.” It was exciting!

As I explored a bit more, I started to find the first small numbers of algae. Then as I moved forward, I came across this area, which was filled with blooming algae. It looked the same as the first year I went there: the long, pinkish-covered bottom of the lake as far as I could see. I started shooting photos, and just a few minutes later, a school of perch came right to me. It was really surprising, and the view was otherworldly.

Phoblographer: What ethical considerations and guidelines do you take into account when photographing underwater, especially when you encounter wildlife like these perch?

Tiina Törmänen: I avoid touching anything. I am a visitor to their world.

Tiina Törmänen: You can find perch in almost every lake and pond in Finland, with the exception of some places in Arctic Lapland. It was fun to learn to understand them more once I started to see them underwater. They are very curious; perch will come to you if you are calm and relaxed and don’t make any quick movements. Some friends of mine laughed at me for saying I was “hanging out” with perch, but I find them to be such sympathetic fish.

Phoblographer: What was it like to physically navigate these waters?

Tiina Törmänen: This time, I only went snorkeling with a drysuit rather than diving. If you stick to snorkeling, navigation is easy, as you float on the surface. When you’re diving, on the other hand, you need to have a plan and follow it.

Phoblographer: How did you get these incredible pastel colors? Did you achieve them in-camera or in post?

Tiina Törmänen: I got these colors in-camera. My style is always point-and-shoot, and these are some of the purest point-and-shoot photos. I only made minor contrast adjustments in Lightroom.

Phoblographer: What do you hope to show the world about our planet’s waters, especially at a time when they’re facing urgent threats like plastic pollution and overfishing?

Tiina Törmänen: I think people should start seeing the world as one. In the end, there is only this one planet, and no border we impose can save people from the powers of nature. Human life is so short compared to life in general, and it is so easy to focus on short-term problems or act like a jerk. People should start respecting their own lives first; after that, we will see how all is one, from the humans to the fish.

All photos by Tiina Törmänen. Used with permission. For more from Tiina Törmänen, visit her website. You can follow along on Instagram at @tiinautti, on Facebook at @tiinaTORMANENphotography, and on Behance at @TiinaTormanen. NFTs are available through Async Art.