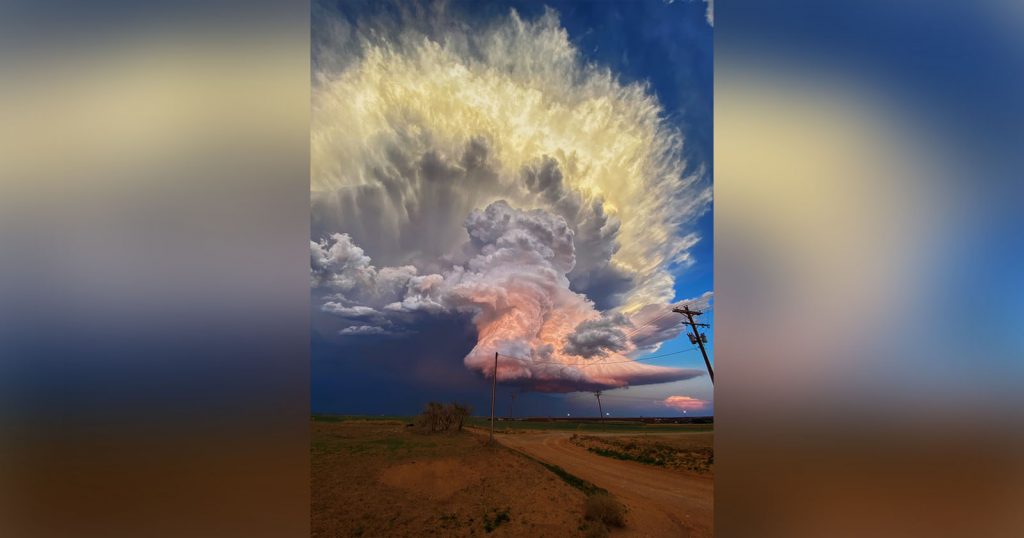 Check out this awe-inspiring storm photo that was captured in West Texas this week. The light from the sunset hitting the clouds makes the sky look like it’s exploding.

Amateur photographer and college basketball player Laura Rowe was out on a drive with her boyfriend this past Sunday (“Small town, nothing else to do,” she says), and the couple was checking out the salt lakes at the Muleshoe National Wildlife Refuge in Muleshoe, Texas, when they saw a small tornado touch down near Earth, Texas.

“We looked at each other and knew we had to check out this crazy storm,” Rowe says. “We followed it for about three hours down county dirt roads […]”

Upon finding a suitable location and noticing the beautiful light, Rowe got out of her car and shot photos of the storm with her iPhone 11 smartphone and its wide-angle camera.

“We were between the sunset and the storm, so that cast an amazing light on the storm,” she says.

Here’s a short video Rowe took from the same spot:

It was! I took this as well. pic.twitter.com/PWKJ8XfT67

The next day, Rowe shared one of her photos on Twitter and was blown away as she watched it go viral on the social media service — it has received over 77,000 Retweets and nearly half a million Likes at the time of this writing.

“I knew that God’s creation was beautiful to witness, but I had no idea that it would explode like this on social media,” Rowe says. “I was just a girl with an iPhone and nothing else to do on a Sunday afternoon, in the right place at the right time.”

If you’re interested in a print or canvas of this photo and supporting a self-described “broke college kid,” you can purchase one here.

Image credits: Photograph by Laura Rowe and used with permission