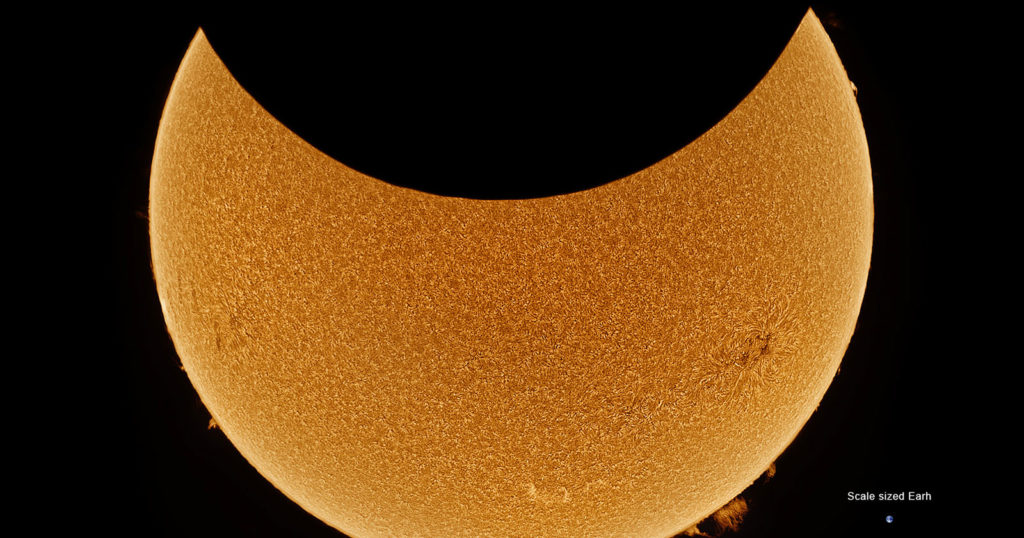 In the morning hours of June 10th, a “ring of fire” solar eclipse greeted sky observers in the northeast United States, northern Canada, Europe, northern Asia, Russia and Greenland. While most photographers captured single photos of the eclipse, Göran Strand decided to show the entirety of the rare eclipse from his backyard in Östersund, Sweden.

Using 50,000 still images that equaled over 250 gigabytes of data, Strand was able to show the two and a half hour eclipse in just 10 seconds. While most people will only see photos of the peak “ring of fire,” Strand’s resulting timelapse is an incredibly smooth depiction of how the moon moved in front of the sun.

This kind of ring-shaped event occurs when the moon is close to its farthest point from Earth during an eclipse, making the moon appear smaller than the sun in the sky, which doesn’t block the whole solar disk.

To add to the remarkable achievement of capturing the movement of the eclipse itself, Strand also captured all of the solar prominences. A solar prominence is a large, bright feature extending outward from the Sun’s surface. Strand also shows a close-up of the largest prominence with a scaled earth graphic beside it. With this remarkable graphic, it’s easy to see how roughly one million Earths could fit inside the massive star.

With so many frames captured, Strand told PetaPixel about how he went about editing the solar eclipse timelapse.

“To capture the timelapse, I took a series of 200 frames every 30 seconds for 2.5 hours,” he explains. “From each 200-frame clip, I stacked, aligned, and calibrated the best 50 frames. In total, I ended up with 250 calibrated still images that I then did further processing with. First, I aligned all of the 250 images, sharpened the details, and then extracted the data that showed all the prominences. Then I had my finished images for the timelapse.”

As eclipses and other notable astro events occur rarely, less than ideal weather is always a challenge for those photographers hoping to catch the action.

“I’ve been doing astrophotography for over 25 years now and one thing I’ve learned is to accept bad weather and the frustration it usually brings during events like this,” Stand says. “On this day, the weather forecast was quite good but clouds were forecasted for later in the day. When it was just 10-15 minutes left of the eclipse, some clouds were moving in but they stayed clear of the Sun, so I’m really glad that I got a perfect eclipse this time.

“Eclipses like these are so exciting to follow. Even though I’ve seen three total solar eclipses, events like these always gives me some goosebumps when you realize you’re actually capturing it.”

With over a quarter-century of experience, it is obvious that Strand is an experienced astrophotographer. For those who wish to follow in his footsteps, he gives his advice to newcomers.

“If you would like to get started with celestial photography I would recommend going slow. Don’t rush out and buy a big, expensive telescope and go planet-hunting. Planet photography is really hard and takes several years to master. Start with your telephoto lenses and capture photos of the moon that you then stack together to get even more detail,” he says.

“This is a technique called Lucky Imaging and is a great way to get sharp images of planets as well as the Sun and the Moon even through very turbulent air. When you have your images, it is time to practice editing them. AutoStakkert! is my favorite software for stacking images of celestial bodies. Above all, have fun and take a moment to realize how small we are in the grand scheme of space.”

Image credits: Photos by Göran Strand and used with permission.