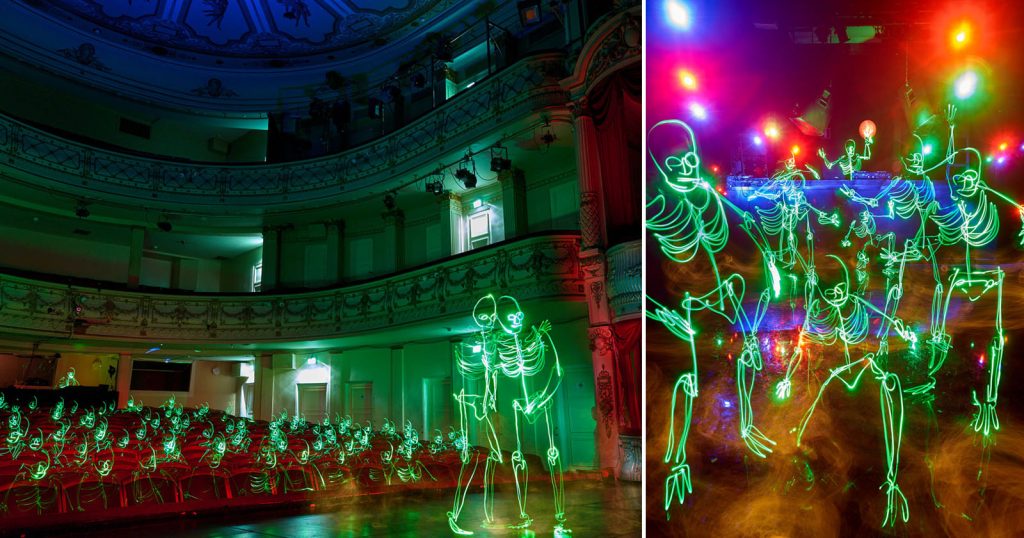 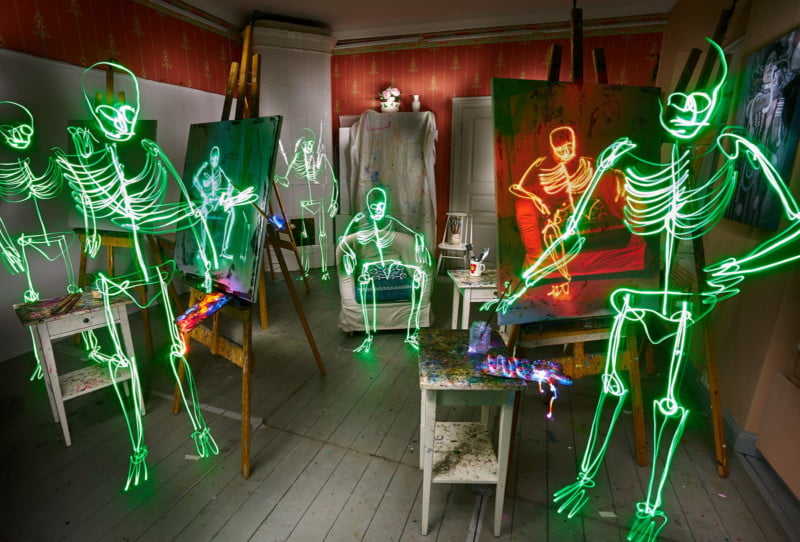 “Behind Closed Doors” is a new photo project by Finnish light painting artist Janne Parviainen. It imagines what might be going on inside the closed buildings of formerly bustling spaces during the COVID-19 pandemic.

“Walking in a city that has been half shut, I’ve been wondering how the once crowded, now empty spaces around us would look like, and started to fantasize of a whole new fantastic life inside them,” Parviainen tells PetaPixel.

“In the photos, luminous light skeletons continue the life that humans have been left out from, having wild dance parties with DJ’s spinning vinyls and theatres full of skeletal crowds,” Parviainen says.

The photos are single long exposures with no Photoshop trickery or digital effects added to them — only basic adjustments were done on the raw files in Capture One. In light painting photography, the artist “draws” light into the scene while the camera is exposing the shot, so Parviainen stepped into each frame and light-painted each skeleton while the shutter was open.

The photo below of a skeleton couple on a theater stage required an exposure time of 46 minutes, during which he drew about 50-60 skeletons. 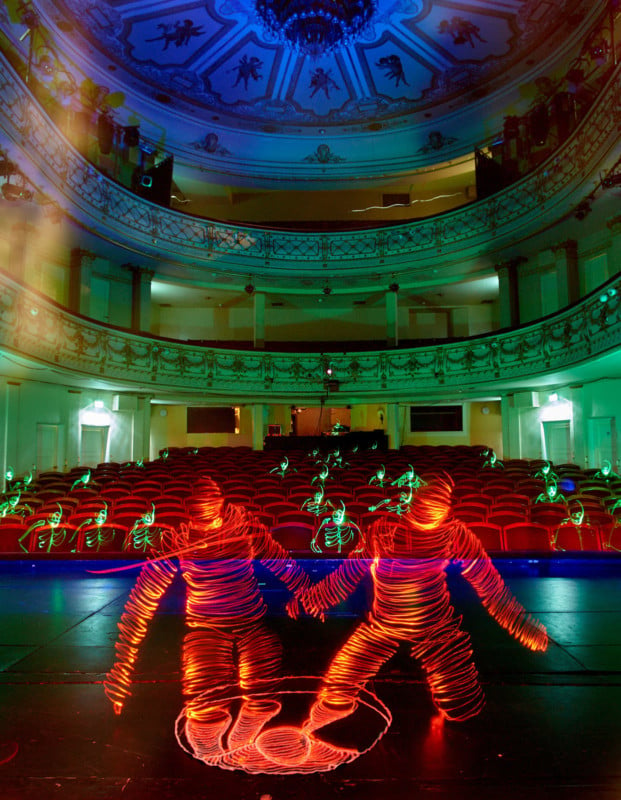 “I’ve been doing light painting photography for 11 years, so I’m already quite good at knowing what to light up, and for how long in dark lit conditions,” Parviainen says. “For the theater photo, the most difficult part in figuring out the lighting was the exit sign lights in the corners of the hall, which, in an exposure of 46 minutes, affect the overall lighting quite a bit.

“Most of the time that is spent in taking these photos is spent in planning and testing the exact places where to draw the characters and testing how to lit up the scenery. For example, in the club images [shown below] in which the light skeletons are dancing to the beat of the DJ, all the lights seen in the photo are just colored flashlights pointed to the camera from different angles.” 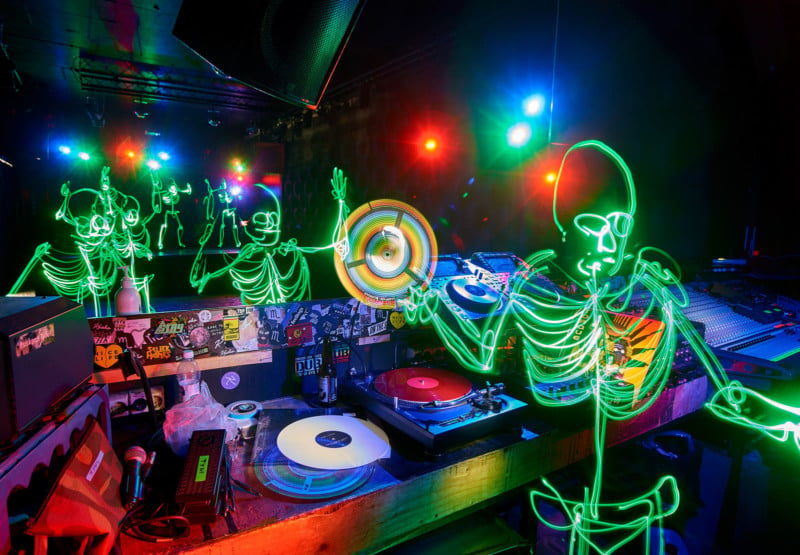 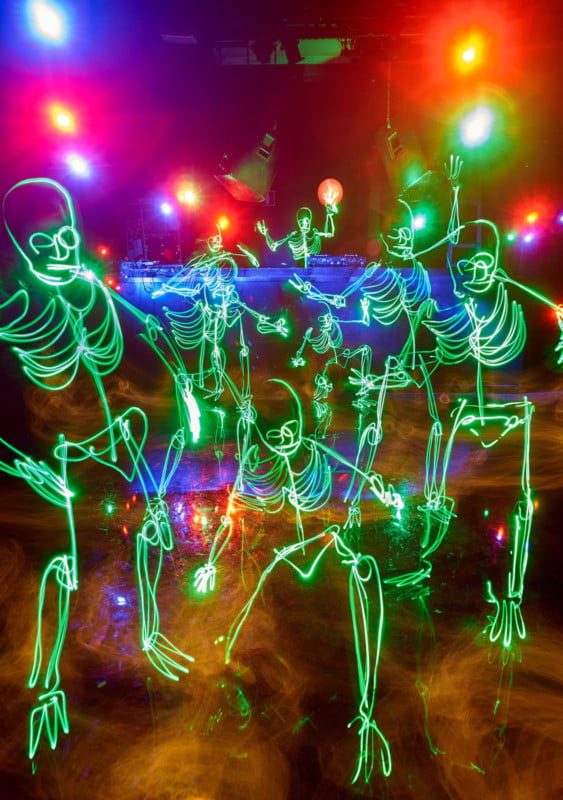 Gear-wise, Parviainen shoots with two cameras at the same time at different apertures and with slightly different compositions, just so he has two options to choose from after each ultra-long take.

“For the colored lights in the photos I used Lenser P7QC LED flashlight. For drawing the skeletons I use small keychain LED lights, so it’s a pretty budget-friendly tool.” 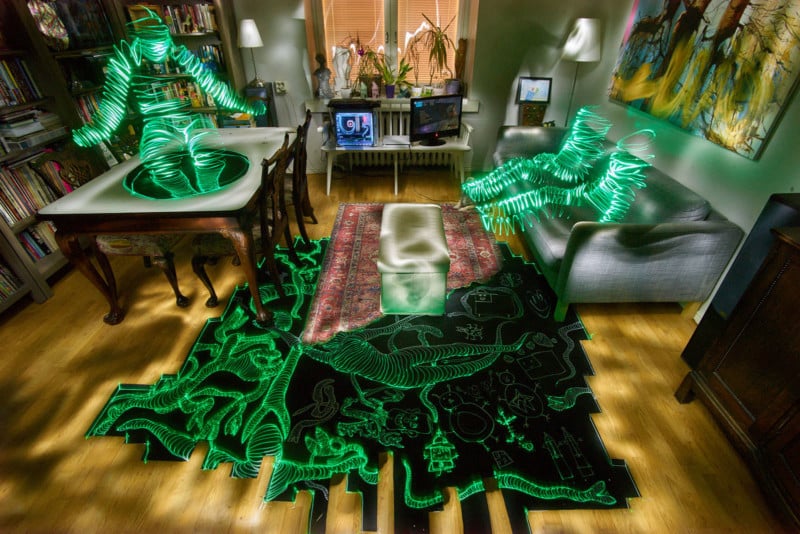 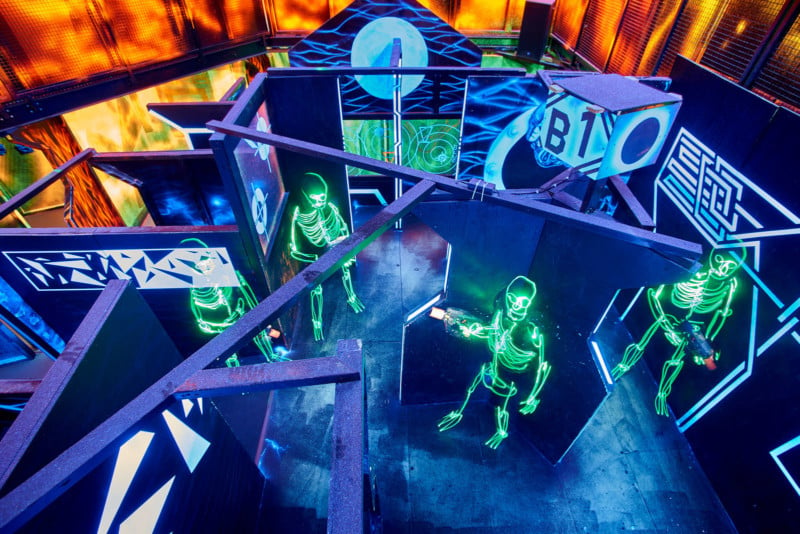 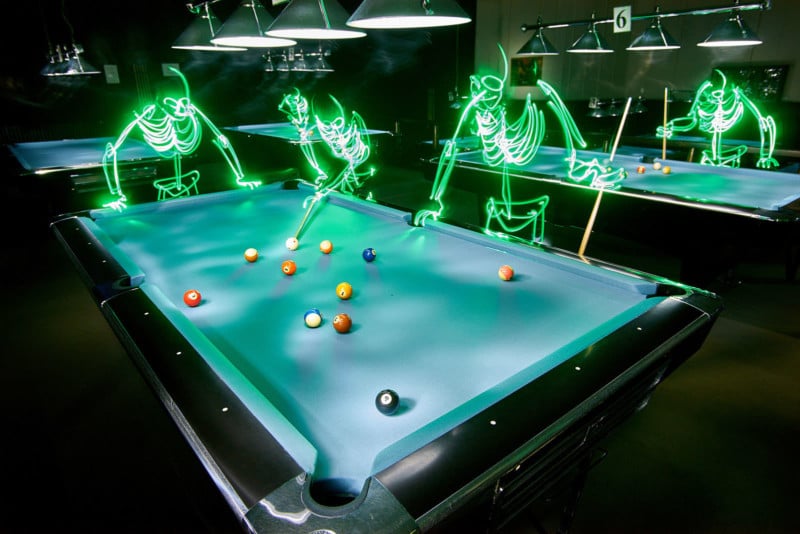 Here’s a 2-minute making-of video with behind-the-scenes views of how some of the photos were made:

“It was an interesting experience to gain access to the empty venues and to witness the absence of the people in places you’ve accustomed to seeing full of people and life,” Parviainen says. “In the project, I also wanted to help the companies that allowed me to photograph in their premises, so I let them use the photos for their social media, etc. to gain exposure in these difficult times.”