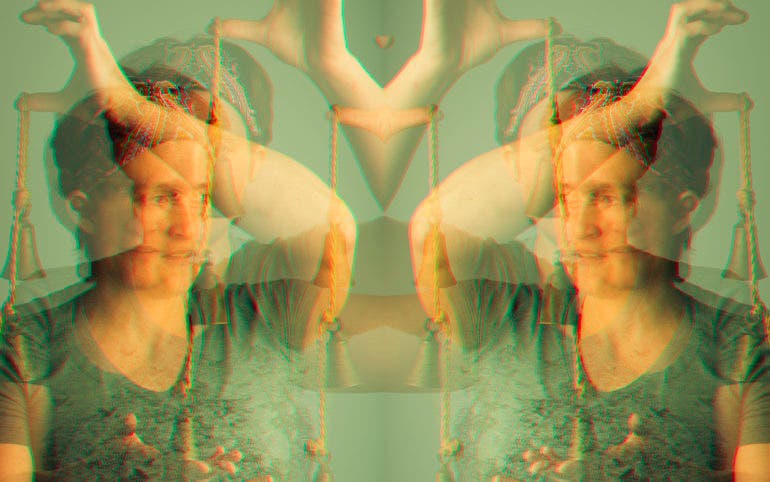 “There are crushes, and there are loves, and I try to figure out which it is before I begin making the images,” clarifies NY artist and photographer Jari Poulin about the different art projects that catch her fancy. She puts a lot of research into her ideas, sometimes taking years to decide whether to go ahead with one. Once she sets her heart on a topic, she plans it out thoroughly, pouring her soul into it from conception to execution.

I enjoy my 3D viewing experiences. I was (still am) super quick to view those Autostereogram images that were wildly popular in the early 90s (the ones where you had to cross your eyes and stare into a dotted piece of art). If an animated movie has a 3D version, I often choose this over the 2D option. I even enjoyed 3D movie experiences on the short-lived 3D TVs of the last decade. Someday, I hope I can see one of Jari’s lovely, life-size 3D art installations in person.

I use the cameras and equipment that fit my vision for the work. For my work in the Senses in Animate work, I used the Nikon D810 because it allows for in-camera multiple exposure which was key to the concept of the work.

Jari Poulin: With a career as a dancer, choreographer and director of dance organizations, I got into photography in high school where we had an exemplary art department and were permitted to focus a concentration in art.  It’s there my already big passion for photography took off.  I learned all kinds of darkroom techniques, some of them quite experimental and only usually explored in college programs.

The pursuit of imagery that meant something to me was key and taught me to find the poetry in a single image.  In my early 40’s, after a career in the dance world, I shifted my focus to photography and made my way towards being a full time artist using photography and printmaking as my main mediums of expression.  At first I worked primarily with abstraction and the uncanny but over time, people and portraiture became my focus with themes of dance, identity, movement, and most recently the introduction of social/political issues in some of my new work.

The Phoblographer: Multiple exposure with a stereoscopic angle to it: not something everyone thinks of when doing a project. How did you come up with this idea?

Jari Poulin: First, let me clarify, that only select pieces in Senses in Animate work are stereoscopic as there are many that are installations, blocks, towers, and wall art alone.  The idea was generated from my desire to make 3D work in installation form and as wall art.  I wanted the exhibition experience to invite the viewer to have a sensory experience in keeping with the concept of the work which is about activating the senses.  I was aware that multiple exposure with various gain settings in the overlapping of images create various levels of opacities in the images and are in themselves a kind of faux 3D. But I wanted to take it a step further and make anaglyphic stereoscopic images and provide 3D glasses to my viewers. I thought that would be another way to express a 3D experience and allow the viewer to use our most powerful sense (sight) to engage with the work visually and mentally.

The Phoblographer: What were the themes and concepts you thought up for each image? Or did you leave the poses down to what the subjects were feeling while in front of the camera?

Jari Poulin: The concept was centered around capturing subjects face and body expression as they experienced the sensory experience of handling an object that would evoke one or more of the five senses.  Sight, Taste, Hearing, Touch, Smell.  Because the concept of the work is about animating the senses and capturing the expressions of the subjects while doing so, I chose a vast array of objects to have in my studio that would elicit a reaction.  The result was quite beautiful as their facial expressions changed and they allowed themselves to become immersed in the object they had chosen to work with from the collection of objects at hand.

The Phoblographer: When you exhibited these, what was the response like? What questions did viewers ask about these images?

Jari Poulin: It was interesting to see the viewers engaging with the work in an immersive experience and the sense of wonder it brought them.  Many of them had never seen a 3D image before, or multiple exposure portraits for that matter. Also, the scale of the large block systems really got them looking for all the images within the images as they could see them in 7 foot size and notice all the nuances of the overlapping images.

The Phoblographer: Each subject is also holding an object. Was this something personal they brought along? If not, then what influenced their choices?

Jari Poulin: The idea of Senses in Animate was to capture layered, multiple exposure photographs of subjects as they activated their senses while experiencing an object that was to serve as a catalyst. In the studio I collected various objects and had them set up on a table that my models could choose from.  The objects on the table were chosen to pertain to various senses, smell, taste, sound, touch, sight.  They included objects like bells, fruit, flowers, scarves, books, typewriter, gloves, silk fabric, and many more.  I worked with models over the course of a few months. When they were in the studio, I allowed them to choose an object of their choice from the table and then I worked with them on a movement pattern they would follow such as turn Right, then bend forward, then turn left, and asked them to improvise and actually experience the object with their sensory powers.

The Phoblographer: What’s the overall emotion you’re aiming to portray with the Senses In Animate project?

Jari Poulin: I really wanted to engage viewers in a sense of wonder that comes from being able to see the transitions of emotion, facial expression, and movement that happened over the course of one minute and three multiple exposures in each and every image while they allowed themselves to be triggered or activated by a sensory object.

The Phoblographer: You’re also implying the concepts of motion and imagined stimuli in here. Are these related to your background as a choreographer?

Jari Poulin: Perceptive of you to ask!  Yes, my choreographer self can’t help but direct my subjects in movement patterns that will be interesting to me in the final photograph. Still, I look at my work with my models as a collaboration.  While my job is to provide the movement pattern for the three overlapping exposures, their job is fully engage with the sensory object and be present in the moment in a genuine manner without contrivances.  Bringing my background as a dancer and choreographer brings so much to my work in terms of a love of movement as an overall theme, but also in terms of lighting, rhythm, story, nuance.

The Phoblographer: As a student of art, are there any movements or styles that subconsciously or otherwise steer the direction of your images?

Jari Poulin: As an artist with a deep background and knowledge of art movements and art history, I am undoubtedly influenced by many of them.  I am aware there are many parallels to cubism in this particular body of work and enjoy that confusion of the image, the abstractions, the need to look a little more at the image to understand it and what is actually happening. In other bodies of my work I relate to pop art, or pictorialism, abstract expressionism.  I am not tied to one particular way of making my imagery, but rather adopt a method that suits my subject matter and what I want to say about it.

The Phoblographer: Ideas for images always float around in my head, but they don’t always translate well when I shoot them. Are there any tips that you have to help readers translate their thoughts into good artistic photos?

Jari Poulin: I use journaling as a way to write about my thoughts, ideas and to make sketches on paper of images I’m thinking of, or about a concept that I’m trying to hammer out.  I tend to spend months or sometimes even years incubating ideas for projects until they are ready to be “born” and made. My typical project will take a year more to complete.  Most of the work I do starts with lots of research.  I research who else has worked with the idea, what is the historical significance of the concept, and what is its relationship with the present and to me?

My work is most often requires a lot of planning in regards models, props, lighting approaches, wardrobe, styling, and I like to build great relationships with my models so that they are comfortable in front of the camera.  I have to say that sometimes I abandon a project if after a lot of thought and research my enthusiasm wanes. There are crushes and there are loves, and I try to figure out which it is before I begin making the images.

The Phoblographer: “A photograph is a membrane through which subject, memory and emotion transmigrate.” Is there a photograph you’ve taken that best describes this wonderful statement?

Jari Poulin: Ah, this is easy, all of them. This quote is from me in response to how I think of photography in general. I think it is inevitable when you are actually present either behind the lens or as a viewer with a photograph in front of you, and it’s what makes me love the art form so very much.

The Phoblographer: Tell us the best way to view these images on screen. What sort of 3D glasses do our readers need to enjoy the experience best?

Jari Poulin: All of the images in the Senses in Animate series are able to be viewed and enjoyed with or without regular 3D glasses which have one red lens and one cyan lens.  I would recommend looking at them without the glasses first and enjoying them in their 2D form before viewing them a second time with the glasses.

All images by Jari Poulin. Used with permission. Visit her website and Instagram page to see more of her work.