The World’s Most Expensive Cameras Ever Sold – Amateur Photographer 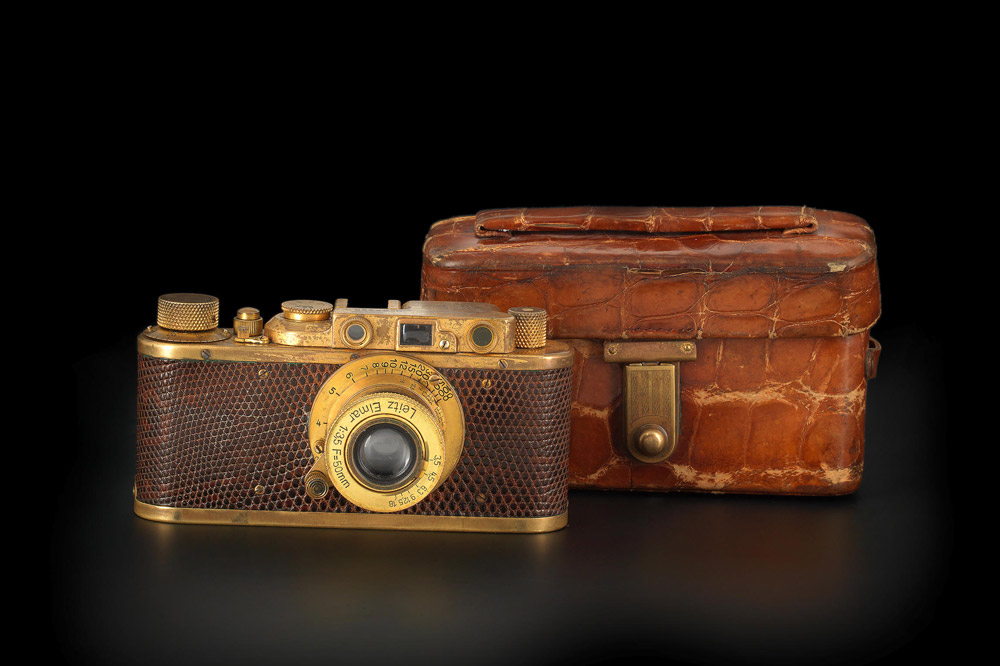 Photography doesn’t have to be an expensive hobby. Amateur photographers know that there are loads of cheap cameras out there, both digital and analogue. However, if money is no object, then it’s possible to spend a lot on a camera. And we really do mean a lot. So here are the World’s most expensive cameras ever!

To make you feel better about the last time you dropped an eye-watering sum on a Fujifilm GFX setup, the latest Sony camera, or a set of shiny new Canon RF lenses, we’ve put together this list of the most expensive cameras ever sold.

It’s a roster that runs the gamut, from ridiculous one-of-kind auction items to historic cameras owned by famous artists. So, without further ado, let’s all put our bank balances out of our minds for a while, and dream of what could be…

In June 2022, one camera obliterated previous auction records by selling in Wetzlar for an absolutely whopping €12,000,000. That camera was a 1923 0-Series Leica, designed by none other than Oskar Barnack, who was the designer of the original Leica I, the first precision miniature camera to be made available commercially, which came out in 1924. Barnack could make a claim to be the grandfather of 35mm photography – he chose the 36x24mm negative size that we still use today, though we know it better as full-frame.

This particular camera was a Leica 0-series no.105. It was Oscar Barnack’s personal prototype, and one of just twenty or so that were made to test out whether a pocket camera shooting 35mm film would be something that your average 1920s guy was actually going to want. It seems incredible now, but at the time, no one was sure if ordinary people would be interested in photography, or if it would remain the niche obsession of a handful of eccentrics.

Our technical editor Andy Westlake was able to view the camera the day before it sold, and found it to be surprisingly small in person, though with a fundamental solidity that reflects how well it was made – this century-old camera is still in working order! With unrivalled provenance, and an incredible legacy, it’s not surprising that the Leica 0-Series 105 went under the hammer for a higher price than every other camera on this list combined.

Another survivor from the 0-Series, this was No. 122, and it went up for auction back in 2018. While it lacked the Barnack personal connection that saw No.105 go for such dizzying sums, this was still a seriously tempting collector’s item. At the time it was noted that the camera was still in remarkably good condition, with all original parts including even the paintwork, and matching lens cover.

An unnamed private collector in Asia got hold of this camera, paying €2.4 million for the privilege, or the equivalent today of about £2.07 million. We have to assume that it’s mounted on a plinth somewhere and isn’t being used to capture a really top-notch traffic trail shot. Though of course, you never know…

One-of-a-kind Leica cameras aren’t just antiques. This unique Leica M was created by Apple designer Jony Ive and fellow industrial designer Marc Newson for a charity auction in 2013. Resembling an Apple product in its aesthetic curves, the Leica M was carved out of a single block of aluminium, and featured more than 21,900 laser-engraved holes, which were not only a visual choice, but also aided the user in gripping the camera securely. Reportedly, Leica engineers spent more than 97 hours precisely engraving the holes.

This redesign involved more than 100 tweaks on the design of the original Leica M, which was released in 2012. The makers went through dozens of prototypes before settling on this final design, and their efforts paid off – the redesigned Leica M ended up pulling in $1,800,000, equivalent to roughly £1,500,000, and more than double what the auctioneers at Sotheby’s had expected.

Yep it’s another Leica – look, people like these things, okay? Special editions of Leica cameras have been coming out for a long time, and still do today, but this sleek number dates back to 1956, when the Leica MP was introduced at Photokina in Cologne. It’s a rare edition of an even rare camera – the Leica MP only saw 412 units produced, while this ‘Black Paint’ version only had 141 units produced. That’s why this one nudged past the million mark at Leitz Auction 39.

The MP was popular with contemporary press photographers, largely due to its compatibility with the Leicavit manual fast winder, which would allow experienced and competent photographers to shoot as many as two frames per second. That’s right – two.

How do you make a Leica camera even more valuable? Cover it in gold, of course. This gold-plated Leica Luxus II, dating from around 1932, was one of only four of its kind manufactured, and had languished quietly with an owner in Bridport for years before being dug up on the TV program Antiques Roadshow, where experts valued it at £5,000.

This proved to be a wee bit of a low-ball, as thereafter, the camera made its way to Bonhams auction house, where it ultimately sold for 4.84 million Hong Kong dollars, equivalent today to about £512,000. Believe it or not, this was actually considered something of a failure, falling well short of the £750,000 that auction house experts had been aiming to get. Maybe it was the fake lizard skin on the outside – we can all admit it’s a little tacky.

This rare Nikon camera ended up as the subject of a bidding war, with the victor shelling out almost half a million dollars for it. The Nikon L11004 prototype, to give it the full title, was something of an unusual specimen – it was an early Nikon rangefinder from 1947 that bore a Leica screw mount.

According to the auctioneers’ best estimates, this was a very early prototype from Nikon, back when the firm was still deciding whether to go with a Leica screw mount or Contax bayonet mount for its 35mm SLRs. No one had found a Nikon prototype with the Leica screw-mount dating back this early – hence the resulting financial bunfight on the auction-room floor.

At the time of sale in 2016, this was the oldest known Nikon camera to exist. With the serial number 60922, it was the third Nikon I rangefinder to come off the production line, and came still bearing its original shutter, thanks in part to its immaculate preservation by Japanese camera collector Tad Sato.

When time came for the auction hammer to come down, this piece of Nikon history more than doubled its estimate. Packaged in with a Nikkor-H 2/5cm no.70811 lens, which even had its original cap, this was the complete package for collectors.

Sure, all these fancy Leicas and Nikons may be impressive – but how many of them have been to space? This Hasselblad 500C was carried up into orbit around planet Earth by US astronaut Wally Schirra when he boarded the Mercury-Atlas 8 rocket mission in 1962. Schirra was something of a photo enthusiast, and had purchased the camera with an 80mm Zeiss Planar f/2.8 lens in a camera shop in Houston, Texas (it’s always nice to have something to take snaps on when you go away).

The camera had been modified before the launch, with one of the most substantive changes being the addition of a 100-exposure film container. It also came with letters from fellow astronaut Gordon Cooper, who also used the camera on a subsequent flight. And, in a happy ending, it was sold to a ‘major space artifacts collector’ based in the UK, who promised to properly curate and preserve the camera for posterity.

If a camera is only worth as much as the pictures it takes, then this Leica IIIa is arguably priceless. Once owned by the great Alfred Eisenstaedt, this was the camera that shot the iconic V-J Day in Times Square image, depicting a US sailor embracing and kissing a woman in a white medical uniform, on Victory over Japan Day in 1945. The image was published in Life magazine, and would go on to become one of the most iconic shots of the 20th Century.

This trusty camera was no one-shot-wonder – it stayed with Eisenstaedt throughout his life, and many years later, he used it to shoot a portrait session of then-President Bill Clinton. It sold at the same auction as the gold-plated Leica Luxus, and although it didn’t fetch quite as much, we have to assume that the owner was still pretty happy with a final price of €114,000.

Another camera held by famous hands, this Polaroid SX-70 Land Camera was used by none other than the iconic artist Andy Warhol in the 1970s, and was ultimately sold for more than £10,000 at Heritage Auctions in 2020. Warhol was notable for carrying a camera of some kind pretty much everywhere he went, and the Polaroid SX-70 was used to capture many portraits of the celebrated people he surrounded himself with.

This particular SX-70 looked much like any other – chrome-plated, with brown leather panels and a flash bar. However, it came with a signed letter from British journalist and pioneer of the underground press John Wilcock, who attested that it had indeed been owned by Warhol, who had given it over to Wilcock around 1985 or 1986. Wilcock had enjoyed a close relationship with Warhol – they co-founded Interview magazine together in 1969 – and his word proved to be good enough for the collectors.

And finally, this may not be the most expensive camera ever sold, but it’s a record setter in one sense. This Leica M4 sold at an auction at Flint’s in 2021 for £1,488, despite the fact that it was, in the words of the auctioneers, “chargrilled”. Damaged by fire to the point of being completely inoperable, this Leica camera still somehow held enough value to sell for about the same price as a new and perfectly operational Fujifilm X-T4.

The camera was dated 1968, just two years after the M4 made its debut, and came with a similarly medium-rare Leitz Summicron f/2 50mm lens. The owner, a collector named Jonathan Bloom, posted on the Facebook group Vintage Camera Collectors that the M4 had been damaged in a house fire, and he had originally paid $900. “I thought of it as pared down to the basics of design,” he said. “An object, perfect in its form. Stripped of its utility but perfect in its design.”

So, next time the local camera shop is short-changing you on a mint-condition Pentax K1000 you dug out of the attic, perhaps try setting it on fire and see if that bumps the price up. On second thoughts, maybe not.

Now you know what’s out there, and how much you could be spending, why not have a look at some more down-to-earth prices, in our buying guides, and latest reviews.