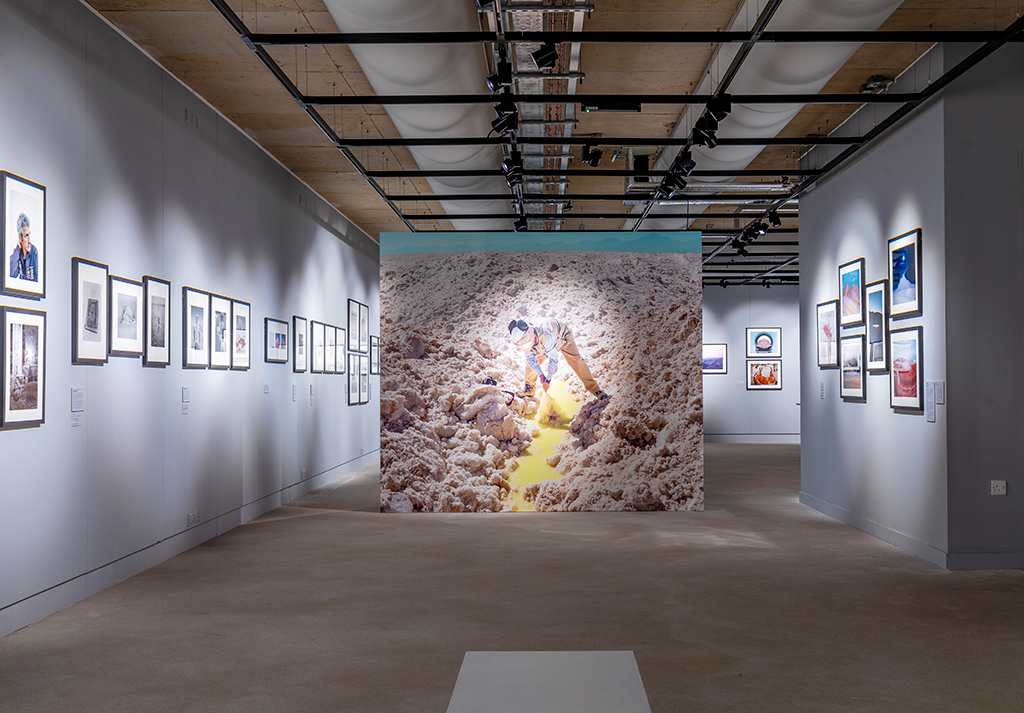 Photographer and print specialist Mike Crawford explores the history of Britain’s oldest and most prestigious photographic businesses. This week he visits The Royal Photographic Society

The Royal Photographic Society (The RPS) has a long and important heritage, yet it is also a progressive organisation that is aware of the importance of photography and how it can be addressed and used in contemporary society. Although based in the UK, it has a global membership of over 10,000, participating in, and delivering a range of events, exhibitions, and collaborations.

In 2019 the society moved to a new building in Bristol, RPS House, which has an exhibition space, an auditorium for talks, events and film screenings, an education centre and a Resource Room allowing access to the Society’s library and other research material. On a recent trip to Bristol, I took the opportunity to visit the RPS to meet Dr Michael Pritchard, the director of programmes, and Evan Dawson, the CEO of the Society.

RPS House Bristol. The Royal Photographic Society was founded in 1853, just 14 years after the announcement of photography, and is recognised as one of the world’s oldest societies for photographers. www.rps.org

Dr Michael Pritchard joined the RPS in 2011, having previously worked for 20 years as a photography specialist at Christie’s auction house. His responsibilities include planning public and educational programmes such as exhibitions, workshops, talks and events with his wider team.

During a tour of RPS House, Michael explained more about their founding and links to early photographic history. ‘The Great Exhibition of 1851 was a catalyst with important changes in technology such as Frederick Scott Archer’s Collodion process announced the same year.’ Prior to this process, which produced negatives on glass, Henry Fox Talbot’s Calotype process using paper negatives was required to produce positive prints.

Unlike Talbot, Archer did not seek patent protection. ‘Talbot’s patents held back progress, but once he relaxed them, allowing the process to be used without restriction, a growth in commercial studios followed and everything was in place for the inaugural meeting of the society in January 1853.’

Sea of Steps by Frederick H Evans, 1903. Taken at Wells Cathedral and copied by thousands of amateur photographers ever since. Exhibited in the RPS annual exhibition

Photography in the 1850s was a relatively expensive pastime or profession. Given our presumptions of a Victorian member’s society, it was reassuring to hear that this was not just an exclusive gentleman’s club. ‘Our membership has always been open to both men and women from the very beginning. Even in the first months there were female members joining in their own right as photographers, participating and exhibiting which of course carries through to the present day.’

The society held its first exhibition in 1854 and this annual event has continued most years, even during wartime. As then, it remains an open call and next April will see the 163rd exhibition open in Bristol following an international submission of over 8,000 images. Another mainstay of the society has been its publication, The Journal.

‘The first issue was published in March 1853,’ informed Michael, ‘just two months after the Society’s foundation. The monthly meetings allowed members to present papers, discuss the art and science of photography and developments in chemistry and optics, with these papers and records of meetings then published in The Journal. Its circulation was far wider than the membership, producing 3,000 copies of some issues at a time when there was at best around 300 members.’

Frederic Aranda, Ian at Home. One of the awarded photographs from the RPS International Photography Exhibition 162

The prefix ‘Royal’ was added to The Photographic Society in 1894, though Queen Victoria and Prince Albert supported the Society from the outset. This tradition continues, with the Duchess of Cambridge being the current patron. The RPS has built up one of the most important collections of photography in the UK and maintains close relationships with the Science Museum and the V&A Museum.

‘For example, when the centenary of photography was celebrated in 1939, a lot of the RPS collection was exhibited at the Science Museum as it did not have a very large collection itself.’ In recent years, this collection has been housed within the V&A, making it available to the public.

They have been doing very important work digitising the collection which is accessible in their Print Room where one can request to see and handle work such as by Talbot, Rejlander and Emerson. I think with any collection of photography in a museum, it is important that it is available to be used rather than just kept in storage.’

Michael is also responsible for the RPS Resource Room in Bristol which allows academics, students, and anyone with a general interest to research the Society’s library of books, journals, records, and other related material. ‘We really do want people to come and use it. We’re working on catalogues and resources so people will know what we have.

‘Currently, Falmouth MA students are doing work on an important collection of Autochromes donated in 2019 and are looking at how this material might be displayed. They have seen digital images but will soon be here to look at them physically, working on their own projects based on the collection.’

Michael concluded by reflecting on the significance of their long heritage. ‘Its accessibility as a member’s institution and a charity promoting photography is essential. The RPS has been integral to the history of photography as an organisation involved in everything from debates on copyright to setting standards in both professional and amateur photography. The history and heritage of the Society continues to be much valued by the trustees and the membership.’

FJ Mortimer, Against the Light, from the RPS’s The Year’s Photography 1938-1939 and exhibited in its annual exhibition

I also had the opportunity to meet the CEO, Evan Dawson, a photographer working in music and performance. ‘I’ve been working in the arts for 16 years before joining the RPS and have been CEO for just over a year,’ Evan told me. ‘The greatest strength of the RPS is its members. There are different levels of membership, and it is possible to join specialist groups such as Analogue, Landscape or Natural History. This is not just a UK photographic community but extends throughout the world. There are active groups as far afield as Australia, India, Sri Lanka and China as well as throughout Europe.’

Evan stressed the importance of maintaining the Society’s contemporary relevance, not just for its members, but also to reach out to a wider community. Much of this is reflected in their new strategic plan for the next five years which has just been launched. ’A lot of changes have been made to our historic governance systems, which is how the RPS functions,’ Evan explained.

‘As I see it, the organisation does three things, which is how we’ve structured our new strategy, Photography For Everyone – it’s themes being to inspire, create and connect. We Inspire people, enabling them to access the latest photography through exhibitions, awards, and our publication, The RPS Journal.

Next is Create, in which our education programmes, distinctions and qualifications support people’s photographic learning and development. The third part is Connect which is how we enable photography to be shared, whether in different UK regions, specialist groups or internationally.’

Evan expanded on this theme with details of some of the proposed new initiatives of the strategy. ‘There are a lot of really interesting and important ideas emerging about photography and well-being. This might concern people who are living with dementia, autism, or other challenges such as loneliness. Photography is a fantastic catalyst for getting people active, being creative and sharing these experiences with other people.

I don’t think that as an arts community we’ve yet understood how to take advantage of the unique opportunities that photography offers. ‘Any form of expression used to communicate, regarding social anxiety, is useful. If it is not possible to connect through conversation, perhaps it is possible through photographs,’ said Evan.

‘We want the RPS to be a centre of excellence for well-being, bringing together practitioners working in this area. Through this, new practice guidance offering support can help to deliver projects. For example, we are in partnership with Positive View, who are working with children affected by drug misuse. Another example is our work with Action for Children funded by Arts Council England to support Britain’s young carers.

Over the coming months we will be providing participating children with resources and workshops to develop their photographic skills to produce a series of environmental portraits documenting their lives. We hope it empowers and celebrates them, and at the same time produces a powerful new body of work for the charity and a touring exhibition.’

I felt a definite sense of pride and excitement from everyone I spoke to on my visit, both in what the RPS has achieved and its plans for the future. This is complemented by their move to Bristol and the location of RPS House, which is opposite the Martin Parr Foundation – which has naturally led to collaborations on events, festivals, and exhibitions.

‘Having the Martin Parr Foundation next door allows the two organisations to work together,’ agreed Evan. ‘We don’t want RPS House only to be a place to come for exhibitions, but somewhere to visit time and again to participate, pick up cameras, try darkroom techniques or join one of the amazing workshops we run. The building is an opportunity to show we can engage with people and support communities.’

2. Gain recognition for your photography by working towards the internationally respected RPS Distinctions with individual advice and support from leading photographers.

3. Take part in a wide range of online and in-person photography workshops, discussions, and events.

4. Support the RPS’s initiatives bringing photography to everyone from young people to those with particular needs.

Mike Crawford is a London-based photographer and specialist printer working primarily in urban landscape and portraiture. His work has been exhibited widely in the UK and abroad. For over 20 years he has run Lighthouse Darkroom, one of the UK’s premier photographic labs, working for many leading photographers on numerous exhibitions and publications. www.mike-crawford.co.uk.