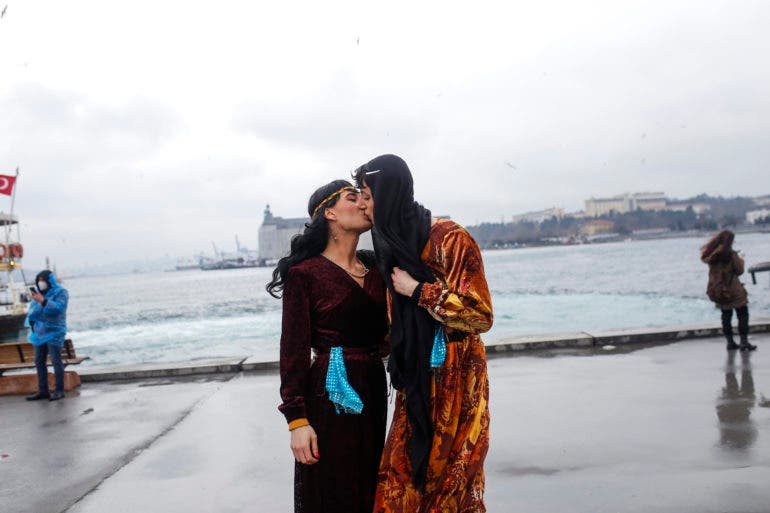 Two of the biggest things that the Phoblographer champions are diversity and intersectional feminism. We’ve been doing so since day 1. Half the Editorial staff are women. We’re minority lead. We have the only reviews team in the photo industry that’s made of mostly women. And we’ve always championed LGBTQ+ rights. That’s part of the reason why we were so happy to be supporters of the All Out Photo Awards. We joined Flickr, MTV, BayPhoto, and more to pledge our support. This year’s winners have positively wonderful imagery. And in this post, we’ll break down their gear and give a bit of a critique of each photo.

Cansu’s photo is so incredibly wonderful because it shows a completely different side of what we typically see from Turkey in Western Media. This is a lovely image of, well, love. And in today’s world, why should we silence love? As a street photographer, I’ve always had a thing for capturing public displays of affection. I think that they can make for wonderful, beautiful, tender moments. One can think of the iconic sailor and nurse in Times Square, but with consent. The couple’s clothing does a whole lot to stand out from the rest of the background. The composition adds even more emphasis to them. The slightly Dutch angle makes the scene seem as if they’re all that’s right with the otherwise crooked world. This photo is seriously wonderful.

Younes packs so much into this image. In one way, it looks a lot like a Victorian-era painting. But we can think even deeper about it to understanding different meanings. Adam, pictured in the photo, is LGBT and couldn’t get a job. Someone also tried to stab him. I interpret the head covering almost like someone being a prisoner. Nudity here emphasizes feeling completely exposed. The only comfort is probably in Adam’s own bed. The bed, sheets, and Adam’s skin all contrast against the otherwise bleak surroundings. And this makes the image that much more effective.

Erica’s photo has a lot going on. There’s nudity, smoking vibrant colors, etc. Erica’s description is about resistance in the sense of confinement. The photo shows a nude figure against various things. The bed is in the corner of the room, which probably means it’s a small room. The bedsheets seem incredibly comfortable. and the wall has a bit of art on it. It’s overall a very cool scene that seems similar to lots of various drawings I’ve seen on Reddit. But of course, one of the big factors is the expression of the person. There’s clearly a whole lot of stress on their face.

Inésio gives us an image that’s incredibly beautiful. The two are obviously supporting one another. Just look at this scene! They’re walking hand in hand on the beach during what looks like a not-too-hot day. They’re wearing matching clothing. They’re taking in the scene. I mean, isn’t this a beautiful couples’ goal for many of us? Lots of us wish we had this in our lives. And probably more of us wanted it during the pandemic.

Emilia seems to have collaborated with the two people in the image above. It brings up so many different feelings. There were times when lots of us in First World countries spent time with a lover in a car. And during the pandemic, this probably happened a lot. Loads of people lost their homes. More people decided that they’d just go about living on the road because it didn’t make a lot of sense. This view is almost cinematic. And better yet, the lighting is pretty perfect on the subjects.

This image from Mike Kear is from the Queer Spirit Festival. It’s a celebration of love, passion, and creative spirit. There’s so much to this photo. The people are sort of shrouded, so we can’t see a lot of details. But what’s evident is that they’re all celebrating. This is beautiful because it insinuates that all of us can celebrate and love one another no matter what we look like. Out of pure curiosity, though, I’d love to have seen this as a drone shot from above. But I understand how difficult that could’ve been.

Hao photographed this couple for a Queer Asian collective. This photo hits me in multiple ways. First off, we should stop Asian hate. Us Asians come in various colors. In our countries, there’s often a lot of issues around bearing children, continuing on with legacies, etc. And it’s centered around traditional couples. But our generations have been slapping that in the face. It means that we can start healing. Artistically speaking, who can’t enjoy the red light and flare hitting the lens? Against the background, it all stands out so much.

Gøneja creates an image that’s positively stunning. It’s specifically about a water ritual. Water, for many years, has been used as a cleaning tool. It’s been a way for many people to heal, let go, float, and be at peace. That’s clearly evident in the image above. This person also has loads of tattoos they’ve gotten for great reasons. So surely, they have stories to tell. Artistically speaking, we can see the blue water contrasting with the person’s skin quite well. It makes them stand out even more.

This photo from Georgia is one that I’d typically see for something like an engagement. These women have probably been through a lot, but they’re clearly healing. And more importantly, they’re healing through love for one another. Look at how they’re looking at each other! This photo also reminds me of Ying and Yang. They’re contrasting and positioned just perfectly enough to make us believe that they are two sides of a while. And that’s wonderful!

All images are used with permission from the All Out Photo Awards.