The Fujifilm X Pro 3 Has Something Uniquely Special About It 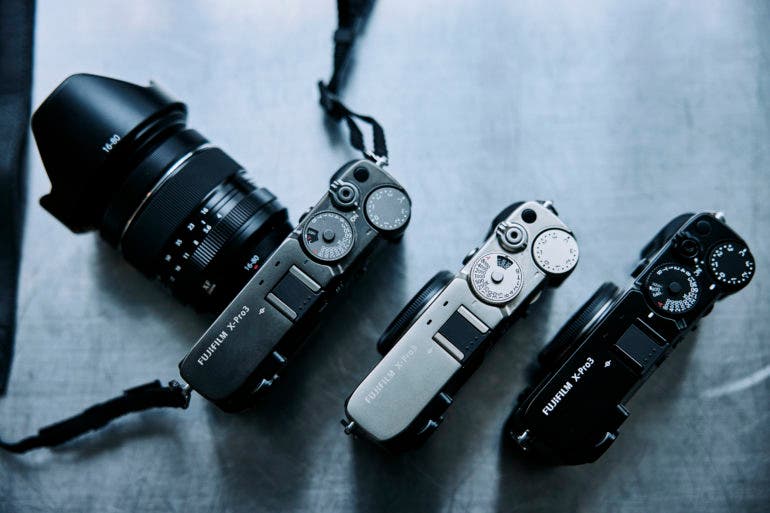 The Fujifilm X Pro 3 is the best camera on the market for anyone who doesn’t want to stare at a screen all day.

“Aren’t you just sick of all these zoom meetings,” is what a rep called and told me on the phone earlier in the pandemic. She called me out of the blue, and I completely agreed with her. But I didn’t realize how deep her words hit me. The entire staff has discussed how we’re all sick of staring at screens. And the Fujifilm X Pro 3 is the perfect answer to that. Yes, there are options like the Leica M10-D. But you’ll probably complain about its price more than you will the X Pro 3’s screen.

I’ve got the first dose of the vaccine. And I’ve now started to open up a bit more and explore again. The other night I wanted to photo walk, but I didn’t want to use anything digital. I was staring at a computer screen all day, and I didn’t want to stare at it again. So I reached for my film cameras. The problem: the film in them is all slide and slow speed film. I can’t use those easily at night.

So instead, I just walked around, but I should’ve reached for my Fujifilm X Pro 3. After all, I gave it an Editor’s Choice award. The hidden LCD screen is just like shooting film with the optional convenience of digital. No other series of cameras have a hybrid viewfinder. You can look at the world and see an overlay in the optical viewfinder. Or you can switch to the electronic viewfinder when you want. And for most of the pandemic, this was my bread and butter camera. The small lenses just work so well with it. It has unique image quality from all the rest. And it isn’t recycling the same sensor made by Sony. This is all incredibly important to me because I can get something unique.

At the same time, I packed my Fuji gear into a backpack, put it in my closet, and swore I wouldn’t touch it for a while. The Fujifilm X Pro 3 has been there to shoot when I didn’t want to constantly stare at a screen. But it also feels like heartbreak is around the corner from this relationship. Fujifilm hasn’t updated the firmware to bring it up to snuff with the other cameras in the lineup. One rep has told me that it’s probably a memory spacing issue. But as a Fujifilm customer, I can’t help but be angered. Where are the autofocus tweaks? Where are all the improvements that came to other cameras? Why should I need to buy a new camera to get a new film simulation?

Since the Fujifilm X100 and Fujifilm X Pro 1, the company has changed how the camera market approaches product life. Fujifilm used to issue loads of firmware updates. By the end of the camera’s life, you felt like you had a brand new camera. But you stuck with Fuji. You kept buying new lenses. And eventually, you got a new camera, then new lenses, etc. That’s how I’ve been. I’ve owned four Fujifilm cameras and at least five lenses. That’s one new product for pretty much every year that the X series existed. Then Fujifilm goes and doesn’t update their most expensive camera in the series?

This camera is perhaps the single best thing for anyone still feeling anxious about the pandemic. I know it’s coming to a close, but we’re far away from that. And lots of folks are going to wait for the vaccine anyway. Aren’t you sick of staring at your computer screen and being in zoom calls? Aren’t you tired of looking at your phone and endlessly scrolling? But you don’t want to shoot film?

Quite honestly, I don’t blame you on the latter. Film isn’t for everyone, but I think that everyone should experience it. And I’m not just talking about the standard stuff. Go for the special stuff: like CineStill, Dubble, or Lomography film. Use the stuff that digital can’t copy. That’s what film’s future is.

Or if you want that experience with the convenience of digital, go shoot the X Pro 3. That way, you’re forced to not stare at a screen when you’re shooting. It’s the closest thing you’ll get to a digital Contax G2 on the market.

PS: This isn’t a sponsored piece. I wrote this of my own accord.