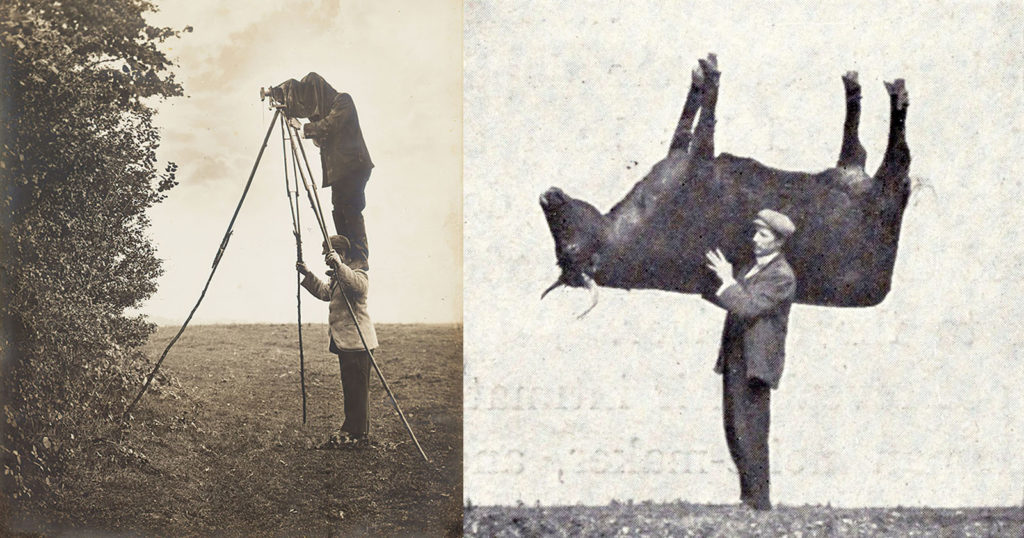 Throughout photography history, determined, creative, and brave photographers have gone to extreme lengths to capture the perfect shot. Here’s a curious photo from the 1890s that shows a crazy tripod setup used by wildlife photography pioneers in the 1890s.

Pictured in the photo are British naturalist brothers Richard Kearton (1862-1928) and Cherry Kearton (1871-1940), who are considered to be among history’s earliest wildlife photographers. The duo was photographing a bird’s nest, and they decided to extend their tripod with wooden sticks and operate the large format camera with Cherry standing on Richard’s shoulders.

Cherry is known for capturing the first photo ever made of a bird’s nest with eggs out in the wild in 1892.

For even higher nests, the brothers were known for tying ladders to the upper branches of trees to use as a way to stabilize themselves and their camera high off the ground.

Climbing up high trees was relatively safe compared to the brothers’ other photographic endeavors.

“We lay in wet heather for hours at a stretch, tramped many weary miles in the dark, and spent nights in the open air on lonely islands,” the brothers are quoted as saying. “We have endured the torturing stings of insects, waited for days and days together for a single picture and been nearly drowned, both literally and figuratively.”

The brothers are also known for inventing naturalistic hides for photography, including a stuffed ox and stuffed sheep. The brothers hid inside the fake animals while photographing real ones.

Richard once fainted inside the fake ox, and it took his brother an hour to locate him inside the tipped-over hide.

“Richard Kearton noted that birds were so disturbed by human presence, the ‘great eye’ of the camera lens, and the click of the shutter, that it was nearly impossible to obtain natural studies,” The Public Domain Review writes. “Sound trauma was addressed with the aural smokescreen of the almost-silent window-blind shutter, while it was found that a false situational familiarity with any residual noise could be created by releasing the shutter repeatedly until the bird ignored it. The harder task of concealing the human form came with the commission of matching suits and caps of reversible material, brown one side and meadow green the other.”

It was after experimenting with these “quasi-military techniques” that the brothers came up with the idea of specialized photography hides.

Other hides used by the brothers were designed to look like things such as piles of rubbish, tree trunks, and boulders.

For their impact in the history of photography, Richard was made a Fellow of the Zoological Society of London and Royal Photographic Society, and Cherry was honored by the Royal Geographical Society with the 1967 creation of the Cherry Kearton Medal and Award (bestowed on “a traveler concerned with the study or practice of natural history, with a preference for those with an interest in nature photography, art or cinematography”).

Image credits: Photograph by National Media Museum and licensed under CC BY 2.0