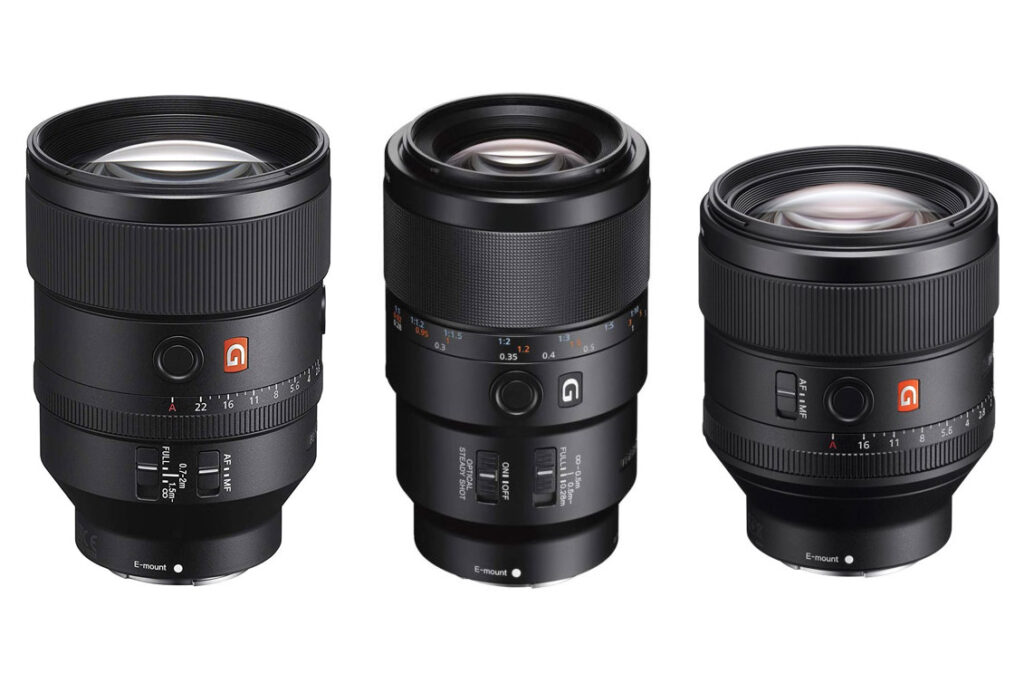 Here are the best Sony E-Mount lenses for your Sony mirrorless camera. We’ve picked the best of the best, highlighting the top scoring E-Mount lenses reviewed by Amateur Photographer, with all of these scoring the coveted 5-stars and a Testbench Gold award!

Whether you’re shooting with the full-frame Sony Alpha A7 series, which includes the new 33MP Sony Alpha A7 IV, or the 61MP Alpha A7R IV, or even the high-speed Sony Alpha 1 or Sony A9 II, you’ll be able to find a great E-Mount lens, as there are a range of high-performing lenses to choose from.

Essential tips on choosing a lens:

Crop factor: If you’re using an APS-C Sony mirrorless camera such as the Sony Alpha A6600, or Sony ZV-E10, these lenses will also work, but with a 1.5x crop factor, plus some of them may feel a little large on the smaller camera bodies.

So without further ado, lets have a look at the best Sony E-Mount lenses.

The Sony FE 70-200mm f2.8 G Master OSS II is the 2nd generation of the 70-200 f2.8 lens from Sony, and this new model offers the lightest 70-200mm f2.8 lens for any system, weighing just 1045g. It also delivers excellent levels of sharpness throughout the zoom range, making it a great choice for anyone looking for a versatile zoom lens. There’s rapid focus, and direct aperture control on the lens, making it easy to use, with great results time after time.

The Sony FE 50mm F1.2 G Master is the largest aperture prime lens for Sony E-Mount cameras, and has answered the calls of Sony fans who have been asking for a lens brighter than F1.4. The lens offers superb sharpness even wide-open at f1.2, and has minimal chromatic aberration. There’s also fast and silent autofocus, an aperture ring (that can be set to clickless), customisable function buttons, as well as excellent build and handling that you would expect from a G Master lens. Plus some lovely bokeh and background blur. It’s also barely bigger than the 50mm F1.4.

The Sony FE 35mm F1.4 G Master lens is another premium lens from Sony, offering superb sharpness even wide open, with excellent handling and operation, in a relatively small and light lens, with metal construction. The lens benefits from silent, and accurate autofocus, as well as a manual aperture ring with both click and clickless operation. As part of the G Master range, the lens is designed for both excellent levels of sharpness, with beautiful and attractive bokeh or background blur.

The Sony FE 135mm F1.8 G Master lens could be considered the perfect portrait lens for Sony full-frame mirrorless cameras, with superb resolution, even at maximum aperture, as well as attractive bokeh. The lens features fast and accurate autofocus, as well as an aperture ring that can be used with clicks, or clickless. There are some downsides, in that the lens is rather bulky and heavy weighing 950g, as well as being very expensive, when compared to alternatives from Sigma. However, the “combination of supreme sharpness and gorgeous bokeh is likely to appeal strongly to portrait and wedding photographers.”

If you’re looking for a macro lens for your Sony camera, then the Sony FE 90mm f2.8 G OSS Macro lens hits the park running, that is to say, it’s excellent, it offers exceptional image quality, being difficult to beat in terms of sheer resolution and image quality. You also benefit from built-in Optical Steady Shot (OSS), helping you keep shots steady and free from blur. It also doubles as a great portrait lens, and can take detailed general photographs.

The Sony FE 85mm F1.4 G Master lens is a bright 85mm lens, that could be the ideal portrait lens, with impressive sharpness in the centre, even when shooting wide-open. There’s also the excellent build quality that you expect from a G Master lens, as well as dust and moisture resistance. Like other G Master lenses, you get an aperture ring with with clickless option. However, there are some downsides, as it is quite weighty at 820g, and it’s also rather expensive.

The Zeiss branded FE 50mm F1.4 ZA lens has a metal build-quality that impresses, as well as an aperture ring that can be declicked, which will benefit videographers. Focus was quiet, but not the fastest, and the high price is something to be aware of. But most importantly, the image quality on offer is “barely believable” thanks to an impressive level of sharpness, as well as goergeous-looking out-of-focus blur, even when shooting wide-open.

This compact 40mm prime lens is part of Sony’s range of compact prime lenses, which includes three lenses: a 24mm F2.8, 40mm F2.5, and 50mm F2.5 lens. All compact, with aperture ring and custom function button, making them great if you want to travel light. The 40mm F2.5 lens offers great sharpness, with minimal chromatic aberration, and a metal hood is included. It’s also one of the lightest lenses featured in this list, weighing just 173g.

The Sony FE 20mm f/1.8 G is an ultra wide-angle prime lens, with a relatively bright aperture of f/1.8, as well as a relatively compact size. The lens has a close focus distance of 18/19cm (MF/AF), and there’s a 67mm filter thread on the front of the lens. There’s direct access to the aperture, with the aperture ring on the lens, as well as the option to use the aperture ring ‘clickless’ meaning that Sony has also considered videographers when making this lens. The lens performs extremely well, capable of delivering sharp images, even when shooting wide-open at f/1.8.

The Sony E 15mm F1.4 G is a new ultra/wide-angle lens for Sony’s APS-C mirrorless cameras, such as the Sony Alpha A6600, with a 22.5mm equivalent view. It’s got a bright maximum aperture of F1.4, and has a close focus distance to help give blurred backgrounds. You’ll also find there’s an aperture ring on the lens, which adds to the quality feel of this lens, which is particularly small, and lightweight, at just 219g! If you’re looking for a wide-angle lens for stills photography or video, then this is a great choice, particularly if you’re looking for something lightweight, that can still deliver excellent image quality.

The Sony FE 24-70mm F2.8 GM II lens is part of the Sony G Master range, and if you don’t know, this is their premium line of lenses, with the aim to provide ultimate image quality, as well as beautiful background blur (or bokeh). This new lens is relatively small and lightweight, with an aperture ring, making it a great match if you’re looking for a small(er) lens without compromising on image quality. There’s an 82mm filter thread, and a relatively close focus distance of 21-30cm. With weather-sealing it’s a perfect match for Sony’s weather sealed mirrorless cameras.

This lens offers a useful zoom range from 24mm to 105mm, with the f/4 aperture helping to keep the size down. Optical steady shot (OSS) means you can use it with E-Mount cameras that don’t feature in-body image stabilisation, and still benefit from optical image stabilisation. When we reviewed this lens we could that it was consistently sharp at all focal lengths, with fast, and silent autofocus. The lens is also relatively compact and lightweight, with an impressively resistant to flare, and for an all-in-one zoom lens, this one certainly impresses.

If you’re looking for an ultra-wide-angle zoom lens, then this could be a great choice, starting at an ultra-wide 16mm, zooming to 35mm. The lens gives sharp images, and with a constant f/4 aperture, the lens is more compact than it would have been had the aperture been brighter. The lens has a solid all-metal construction, and takes a 72mm filter on the front of the lens.

Have a look at more buying guides, especially if you’re looking for the best Sony cameras, or have a look at our latest lens reviews.