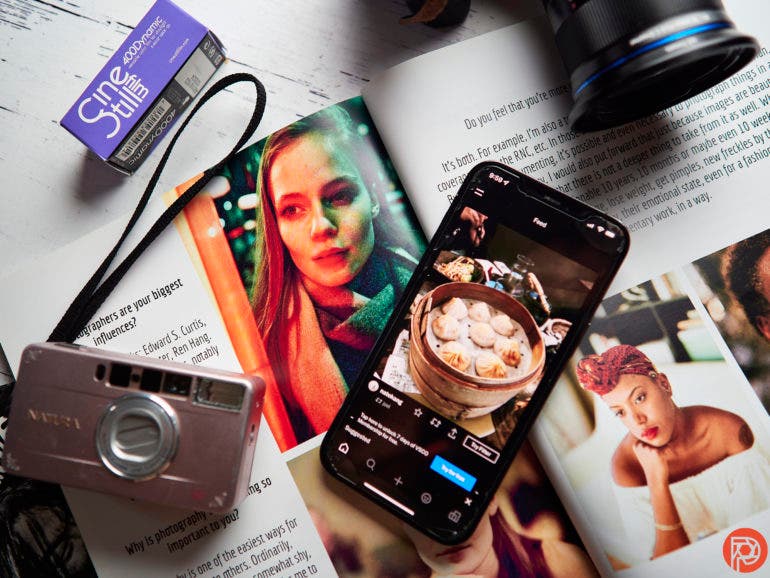 Let’s be honest, photographers are really annoyed at Instagram. They’ve been considering places like TikTok and more but those are spaces for content creators. Thankfully, there are still communities that think photographers are valuable. So we’ve rounded up some of the best communities for photographers. Looking to ditch Instagram? Consider one of these places and find yourself a new home.

Subscribers get some sweet perks and are automatically entered into contests!. Download our app for iOS, iPad, and Android and get no banner ads for $24.99/year.

VSCO: A Nice Place for Photographers Who Hate Comments

What Is It? VSCO has been around for many years, and has stayed on the path of sustainability. It’s a company that focuses primarily on creating tools for photographers in the form of presets and a few other new things. From what we’ve been told from the company’s heads, we’re interpreting that VSCO will stay the course on tool creation. But they’re seemingly going to improve on what Behance tried to do for photographers as well.

VSCO relies on sales for income. You can buy memberships and their tools for photographers.

Value for Photographers: The value here comes in the form of having a lot of different presets to work with. But there’s also the cool thing of using VSCO Spaces for networking with other creatives. Talking with producers and others is a nice way to possibly get gigs in the future.

Ethical Issues: We couldn’t find any major ethical issues in our research. VSCO is pretty big on protecting the rights of photographers and their images. Personally speaking, that’s one of the reasons why I’d consider it one of the best communities for photographers.

What Is It?: The cool thing about Behance is that it ties into Adobe’s other products like Adobe Stock and more. It’s Adobe’s attempt at a social media space for creators and photographers. We use it for research and we also know that photographers collaborate with brands through it. The people here are often very serious about their work, and people tend to comment on each other’s stuff if you build relationships.

Behance is totally free, and honestly we’re not sure how they get income at all. I’d consider it a loss-leader for Adobe. We’ve talked about how much we love Behance for years.

Value for Photographers: The cool thing is that your images can integrate into Adobe Stock. So it’s a way to get sales. But also, it’s a great way to be found by publications for feature interviews. Anyone who says publications are just “using them” is probably kidding themselves when journalists work to ensure that photographers are put in the best light possible. That, and the SEO benefits of having a publication link to your work helps quite a bit.

Ethical Issues: We don’t have any major ethical issues around Behance. If you upload your images, they’re by default set to Creative Commons. Make sure to change that. In my eyes, Behance is one of the most ethically good things that Adobe does. But if you’re not one to make excuses for billion-dollar companies, you can stay away from this one.

Flipboard: A Place to Go Deep Into Your Photography Passion

What Is It?: The fascinating thing about Flipboard is that it’s primarily a place for publications. But in recent years, they’ve been trying to become more of a space for photographers who create content. They’ve had many algorithm changes and I know a few people who use it. But transparently, I don’t know many who have gotten gainful employment from it. However, if photography is just your passion and hobby, then you’ll easily spend lots of time here.

Flipboard gets income through advertising. Think of them like Apple News, but far prettier in some ways.

Value for Photographers: The value here is more for passionate photographers than for professionals. I don’t know many who’ve gotten lots of sales. So head to Flipboard if you’re a hobbyist.

Ethical Issues: We use Flipboard a lot because many readers come to us from there. In fact, we’re the largest accredited photo publication on Flipboard. Years ago, when Unsplash was getting started, Flipboard was a sponsor. We’ve asked Flipboard why they’d do something like this, and we never got an answer. Unsplash uses very deceptive tactics to get new photographers to give their images up for free. At the same time, photography is only just a small part of what Flipboard does, and they don’t try to take money from photographers the way a company like Peak Design does.

What Is It?: The oldest one of the bunch here is Flickr. It’s ugly, broken, and hasn’t done much to evolve over the years. But it works! The communities and groups within Flickr are a bit vibrant but surely waning. They rely on their audience for income plus there are a few ads.

Value for Photographers: The cool thing about Flickr is that it integrates into stock companies. And sometimes it’s a great place to be found. But we’re not sure how many big publications besides the photography-related ones care about Flickr anymore. Still, it has an enduring legacy that makes it one of the best communities for photographers.

Ethical Issues: We don’t have major ethical issues with Flickr except for what they do around NSFW content is odd.

Tumblr: It Grew Up!

Value for Photographers: The cool thing about Tumblr is just how beautiful the desktop experience is. You can literally build your own website using Tumblr, and it will rival the best from both Format and Squarespace.

Ethical Issues: We honestly don’t have many ethical issues with Tumblr. In fact, they’re pretty big on copyright protection. You retain any ownership of the content that you share on Tumblr. Anything you upload is considered your intellectual property. By all means, Tumblr is pretty big on protecting photographers and their rights. Copyright protections are huge for making it one of the best communities for photographers.

Grainery: One of the Best Communities for Photographers Shooting Film

What Is It?: They’re a new kid on the block, and Grainery is trying to be what Instagram used to be, but only for film shooters. Yes, we finally have a place where we can geek out on our own analog love. No more of that filter-applied crap.

Value for Photographers: The value for photographers isn’t really there yet except for your own peace of mind that you’re looking at real film scans. It’s a very new app, so there’s still a lot of work to be done. But considering what’s happening right now, it’s one of the best communities for photographers that shoot film.

Grainery, please keep the influencers away with their heavily filtered photos. We just want to see film.

Ethical Issues: We have no issues with Grainery yet. It’s still so incredibly new. But the leadership seems committed to making this a nice place for photographers.

What Is It?: The app I had the most faith in for years was EyeEm. They make money through their missions, which are contests done with companies in collaborations. They also have a stock service. Honestly, they’re a wonderful place for photographers to discover new work, talk with others, and share their stuff.

Value for Photographers: The cool thing here is that you’ll actually see photos and be able to network with other creatives. Additionally, they integrate into Getty Stock and Adobe Stock. I read online that one photographer made more money in eight months of using EyeEm than they did in two years using just stock companies.

Ethical Issues: We parted ways working with EyeEm years ago because of the ethics of how they were using AI. They released a magazine that studied the thought processes of their editors and removed the human aspect of curation or education on creating better photos. This is applied to the images upload experience. When you give it permission to look at your phone’s photos, it has a “suggested” option. This is using EyeEm AI to determine what a “good photo” is. In reality, it’s often proven to be pretty rudimentary.

They were acquired by another company, and things are changing for sure.

To EyeEm’s credit, they’re huge on copyright protection. In fact it’s pretty complicated, according to their explanations. Here’s a quote from it:

“This means that you can’t upload photos that are obtained from other sources, such as online image search results or websites. Furthermore, images taken by you that are already granted exclusively to someone else, can’t be uploaded either.”

These are standard policies in many ways, and they help to protect the community.

It should also be noted though that photographers have uploaded images to EyeEm and haven’t been paid. And to that end, some are angry. Here’s a post from photographer Michael Moeller who we’ve featured previously. This is a reason to give a photographer hesitancy.

You might be wondering why I didn’t list 500px. The reason why is because it always felt a bit creepy to me. It’s been huge on nudity, and over the years I’ve heard claims of shady and unethical dealings with funding. Their image rendering is quite nice, but so too are those from other services.

Overall, all of these services are easily the best communities for photographers. Photographers are also a large category. Some of us are content creators. Others really just call this our hobby and passion. Yet others are professionals and want to find new ways to bring in income. Photographers haven’t been shown a whole lot of love compared to musicians or others when it comes to copyright protections. But hopefully that will change.