Tasneem AlSultan Shows Essential Workers in a Light of Dignity 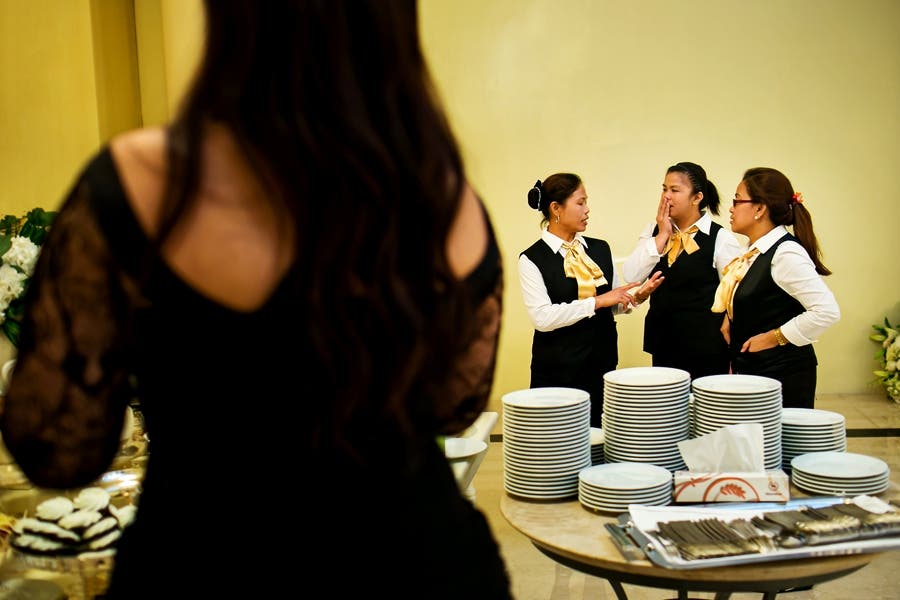 “Everyone deserves to be photographed in a manner that shows them dignified,” says Tasneem AlSultan about her approach to photographing often-overlooked workers of our societies. A surprising incident from her youth propelled her to photograph their lives in a positive way. She’s spent a fair bit of her career creating projects that shine a light on the marginalized class living with and among us.

Tasneem AlSultan gets it right when it comes to photographing those who aren’t as fortunate as we are. Especially with travel photography, there tends to be a fascination to capture images of the poor in their state of destitution. While this is a necessity to raise awareness, shouldn’t the poor have a right to a dignified photograph? Why must they always have photos taken of them in indigent surroundings when they too could have a smile to offer? Tasneem hopes to change this attitude with her work. We spoke to her about her Maid in Saudi project as part of our Arab American Heritage Month coverage

The Phoblographer: Hi Tasneem. Please tell us about yourself and how you got into photography.

Tasneem AlSultan: I’ve always been interested in the art world, more than science. My parents, both being academics, only encouraged me to see art as a hobby. So although I owned a camera at the age of nine, I ventured into literature and linguistics as a major for my undergrad. I remember pleading to study graphic design, and later on a masters in photography. Yet my parents thought photography wasn’t a direction that would feed anyone.

Years later, whilst I was an English language lecturer in Bahrain. I started posting images of my two daughters on social media. Soon after, many friends and family asked me to photograph the same spontaneous images of their own children and families. After a few months, a big mall in Bahrain asked to use those images, featured on my website, to be used for their women and mothers campaign.

Fast forward a couple of years later, I quit my teaching job and decided to focus on documenting weddings primarily, and also cover topics that I thought were personally rewarding.

The Phoblographer: “Maid in Saudi”. How did the idea come about for this project?

Tasneem AlSultan: I was born in the US, and grew up in the UK. I remember as a young girl, my grandparents and relatives would have a driver and a domestic worker living in their homes. Speaking fluent English, and not so well in Arabic, I found friendship with the Philipino domestic worker named Alifa. She was nineteen, and I was nine. I remember she would open her closet and show me photos of actors and would read out handwritten poems to me. A few days later, my cousin cautioned me to stop speaking to Alifa. “She’s just not someone you should trust” she whispered. I was shocked and confused but I still became weary. I felt guilty for not spending as much time as I’d liked, and think back at how insensitive that must have been for Alifa. Moving back to the Middle East, and later becoming a photographer, working on stories that dealt with topics of domestic workers was the first to come to mind.

The Phoblographer: How many maids were photographed as part of this series? What was the criteria for their selection?

Tasneem AlSultan: Any foreigner from a country that wasn’t referred to as an expat by people here, was interesting for me to photograph. Builders, waiters, stage builders, cleaners, drivers, babysitters,…

The Phoblographer: Were the households cooperative with having their maids photographed? What were some of the difficulties in getting them to pose for the camera?

Tasneem AlSultan: I didn’t want anyone to pose. Portraits or documentary, I hoped to photograph everyone in a natural setting. Not many household owners agreed to be included, so I didn’t pursue them. The only difficulty was that everyone photographed felt uncomfortable having me photograph their bedrooms. I didn’t want anyone to feel like I was invading their small private sanctuary, so I only photographed their bedrooms if invited in.

The Phoblographer: They make a tough decision to be separated from their families and work alone in order to be providers. How does this disconnect affect them over the years and decades?

Tasneem AlSultan: Greatly. Many of the men that have left their homes won’t see their children and wives for years. The women are either working to feed their families or to put their siblings in schools and receive a better education that the one they were offered. No one accepts to come work in a strange country, under these conditions and has a better option back home. I remember photographing a domestic worker who’d come to Saudi Arabia, and later found out that she had to leave due to having a rare incurable disease that the Saudi authorities would have to send her back. She weeped and begged to stay. It was heartbreaking to witness.

The Phoblographer: In many families these maids integrate seamlessly into the household. But sadly this isn’t the case for all of them. Does your series shed a spotlight on this too?

Tasneem AlSultan: Yes. I have images that captured verbal abuse, and stark contrast in the working environment. I haven’t published any of these images, but hope to one day.

The Phoblographer: Apart from photographing their daily lives, did you also take posed portraits of some of them? Why or why not?

Tasneem AlSultan: It’s a mix. Depending on the situation I’d met each person.

The Phoblographer: When you photographed the ones who weren’t having an easy life here, how easily were those struggles coming across in their faces?

Tasneem AlSultan: Everyone deserves to be photographed in a manner that shows them dignified. So however difficult their situation and livelihood is, you’d usually know from reading the caption.

The Phoblographer: Returning back can’t be easy for many who may emotionally root themselves into Saudi society and find it hard to re-assimilate to their native countries. Have some expressed a desire to stay longer or live out their lives here?

Tasneem AlSultan: Yes. I’ve met quite a few families that have all moved or were born in Saudi because either of their parents worked for a family that was compassionate and offered all the support to help financially and even to take care of the education and employment of the children.

The Phoblographer: Was shooting this series similar to your other photo documentary projects?

Tasneem AlSultan: The topic may be different, but the style is the same. With the project Saudi Tales of Love, I include collaborative portraits, but with the rest, I photograph in whatever manner that is quick, non-invasive, and respectful to the person I’m photographing.

The Phoblographer: The concept of a live-in maid isn’t as common in the West as it is in the Middle East. As someone with roots in both types of societies, what similarities and differences do you see regarding this?

Tasneem AlSultan: I hear the term “modern-day slaves” being repeated by the West. While I agree that there are many horrific cases of abuse, this isn’t the only workspace where abuse happens. Offices of executives and managers can include toxic and misogynist attitudes toward women and anyone in a less position. Humans can create a crippling and dangerous environment. This is universal. I hope that laws change to protect the less fortunate in every working space. The system is far from perfect, and I hope that every worker receives protection and respect in every domain and every position.