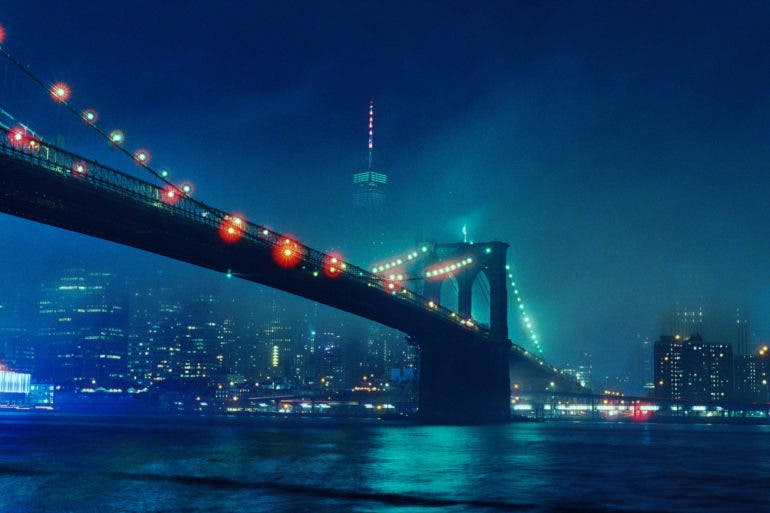 All images by Tarik Tosun. Used with permission. For more stories like this, please subscribe to The Phoblographer.

“As I walked down to the river that night, I remember catching a glimpse of fog rolling over the One World Trade Center,” the photographer Tarik Tosun tells me. “And I remember thinking, ‘Wow, this is going to be really cool.’” A software engineer by day, Tosun lives in Brooklyn Heights in New York, just a short distance from Brooklyn Bridge Park. Throughout the pandemic and its aftermath, he took many walks along the waterfront. On one of those quiet evenings, the mist came and engulfed the city, transforming its familiar architecture into something straight from a science-fiction movie.

Shot on CineStill 800T film, Tosun’s hypnotic photographs capture the Big Apple at a strange and critical time in its history. During the pandemic, the city that never sleeps fell into a slumber. On that haunting and quiet evening in Brooklyn Bridge Park, perhaps Tosun memorialized a moment of collective loss, darkness, and anxiety. But at the same time, he also captured the enduring spirit, hope, and resilience of New York City–symbolized by thousands of twinkling lights in the distance. We asked him about the series.

The Essential Gear of Tarik Tosun

Phoblographer: You’re a software engineer by day. An analog process like film photography is not the most obvious passion for someone who creates robots and develops AI. What is it that drew you to analog photography as opposed to digital?

Tarik Tosun: I first got interested in photography during grad school. Until a couple of years ago, I used only digital cameras. Nearly all credit for my love of film goes to my friend Rob, who’s a fantastic film photographer. I was super dismissive at first. I thought film was just some silly hipster thing.

But Rob and I would shoot together a lot, and eventually, I just couldn’t deny the fact that the film photos coming out of his decades-old rangefinder looked more beautiful to me than the uber-precise images produced by my high-tech, expensive DSLR, even after all the editing I was doing. I bought my first film camera, an Olympus XA, a little over two years ago, and ever since putting my first roll of Tri-X through it, I’ve been hooked. I still shoot digital quite a bit, but for artistic purposes, I much prefer film.

Phoblographer: Why did you choose CineStill 800T for this particular series?

Tarik Tosun: I had seen a bunch of really interesting shots on Cinestill on r/analog, and wanted to give it a try.  Cinestill 800T is a super odd film, and it can be a little difficult to use. Because of the tungsten balance, you really have to pay attention to the lighting conditions. If the lighting has any blue tones, the photo can come out unexpectedly looking extremely blue. The deep blue tones in these photos were a bit of a happy accident, actually. The long exposure really picked up the blue light of the twilight sky, and the tungsten balance of the film accentuated it.

Phoblographer: CineStill is a modified cinema film stock. Were there any specific movies that helped inspire this body of work?

Tarik Tosun: I’ve been told these photos have a serious Blade Runner vibe, and I can’t say I disagree.

Phoblographer: Did you create these photos in one evening or over the course of several visits to Brooklyn Bridge Park?

Tarik Tosun: I took them all in one evening around 9:00 PM.  I honestly didn’t plan it too much. I was excited to try shooting long exposures on Cinestill, something I’d never done before, and the weather was finally warm enough to make nighttime shooting pleasant. I enjoy shooting on a tripod at night; it’s quiet, and it forces me to slow down and be really thoughtful about composing the shot.

I wasn’t sure how these photos would come out, so this shoot was a bit of an experiment. As it turned out, I got lucky, and everything came together in a lovely way. The interplay between the deep blue of the twilight, the fog, and the blue cast of the film creates an otherworldly ambiance, punctuated by the bright halos around the lights.

Phoblographer: How long were these exposures?

Tarik Tosun: The exposures were all around one to two seconds long. I love the way long exposures capture water and how reflected lights play on the surface. A one-second exposure will still capture some of the texture of waves and ripples on the surface, while longer exposures will smooth it out into a flat, iridescent surface.

Phoblographer: Was the park busy or quiet that night?

Tarik Tosun: Since it was a weeknight, it wasn’t too crowded.  When I was shooting the Brooklyn Bridge, there were a couple of guys shooting a music video of one of them rapping with the same view as the backdrop. He was surprisingly a pretty good rapper, actually. I should have asked his name!

Phoblographer: How has your relationship with the city evolved over the last year?

Tarik Tosun: I moved to NYC in the fall of 2018, and prior to that, I lived in Philadelphia for six years. I love both cities, and I’ve shot a lot of photos in both.  New York is probably one of the most photographed places on earth and for good reason. There’s a vibrancy of life here that’s hard to find anywhere else. It feels like on every block, at any time, there’s something going on.

My starkest memory of the lockdowns was how empty the city was. For a little while, that vibrancy was missing. I remember walking through the heart of Soho down an empty sidewalk and seeing an ambulance tearing down the empty street. Spooky stuff.

Phoblographer: Were you in lockdown when you created these photos, or had it mostly ended?

Tarik Tosun: These photos were from the first or second week of April. At that point, I wouldn’t really say I was in lockdown. I actually got my second vaccine dose about a week beforehand, so by the time I took these photos, I was just on the verge of reaching full immunity and emerging into the world again. As a result, I was feeling really optimistic. It was starting to feel like spring, and the pandemic was finally starting to feel like it might come to an end. I think my optimistic attitude at the time played a role in wanting to try something new photography-wise, and, as it turned out, I got some great shots.

Phoblographer: Did your feelings during the pandemic serve as creative fuel for your photography?

Tarik Tosun: I took a lot of photos during the lockdown. My photo labs shut down for a while, so I started developing C-41 at home. The photos I developed myself during the pandemic hold special emotional significance for me because they’re intimately tied to the emotions of this harrowing year. They’re a visual record of what will almost certainly remain one of the strangest and most intense periods of my life.