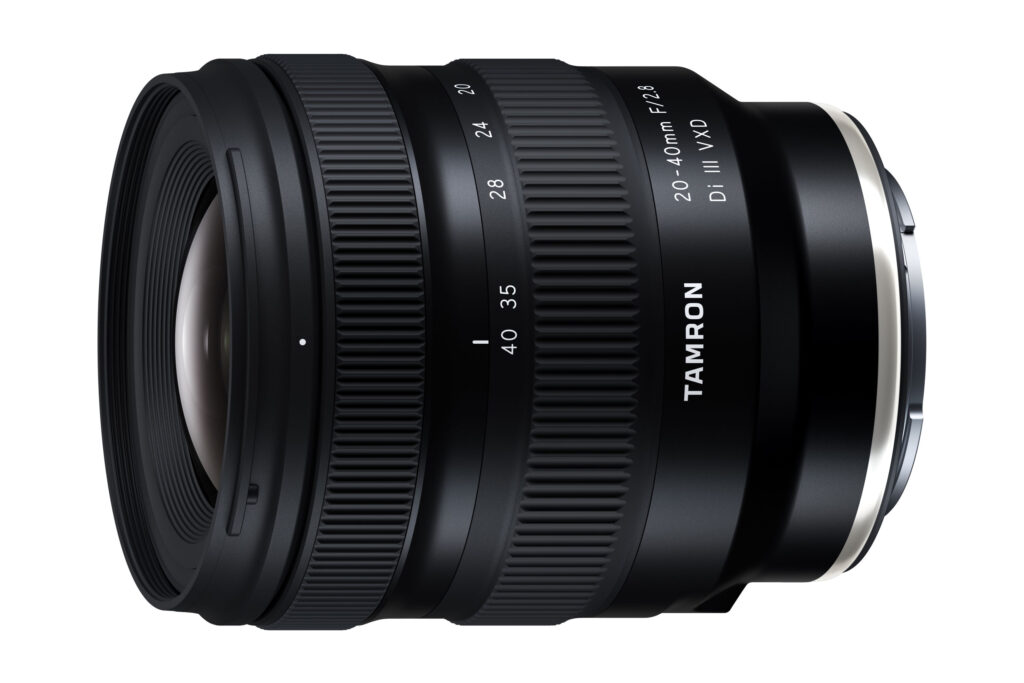 Tamron has revealed that it’s in the process of making a new compact large-aperture wideangle zoom for Sony E-mount full-frame mirrorless cameras, in the shape of the Tamron 20-40mm F/2.8 Di III VXD. The unusual 2x zoom range gives a narrower wideangle view than existing optics such as Tamron’s excellent 17-28mm F/2.8 Di III RXD, but extends longer to 40mm,  which many photographers consider gives a particularly natural-looking perspective. This range also enables the lens to be the ‘smallest and lightest in its class’, according to Tamron, measuring 86.5mm in length and 356g. This makes it 12.5mm shorter and 64g lighter than the aforementioned 17-28mm f/2.8, and very similar in size to the Sony FE 16-35mm F4 G.

Other key features include Tamron’s Voice-coil eXtreme-torque Drive (VXD) system that employs a linear motor for fast, silent focusing. The minimum focus distance is just 17cm at the wideangle setting, which provides 0.26x magnification. The zoom ring rotates through just 65° for rapid compositional adjustment and the barrel boasts moisture resistant construction, with a fluorine coating on the front element to repel water and grease. Like many of the firm’s other E-mount lenses, the Tamron 20-40mm F/2.8 Di III VXD employs a 67mm filter thread.

Cosmetically, the lens resembles the Tamron’s other recent designs such as the Tamron 35-150mm F2-2.8 Di III VXD. It’ll likewise be compatible the firm’s Lens Utility software for setting the function of the focus ring and updating firmware, which on the 35-150mm works via a built-in USB-C port.

Tamron clearly believes this lens will be highly attractive to vloggers, with its wide view being ideal for arms-length self-filming, and light weight making it amenable to use on a gimbal. But it should also be an intriguing option for landscape or travel photographers looking to keep weight to a minimum. The lens is due for release in Autumn 2022, but as yet there’s no hint as to how much it will cost. We’d expect it to be more affordable than the 17-28mm f/2.8, though, which costs £849.