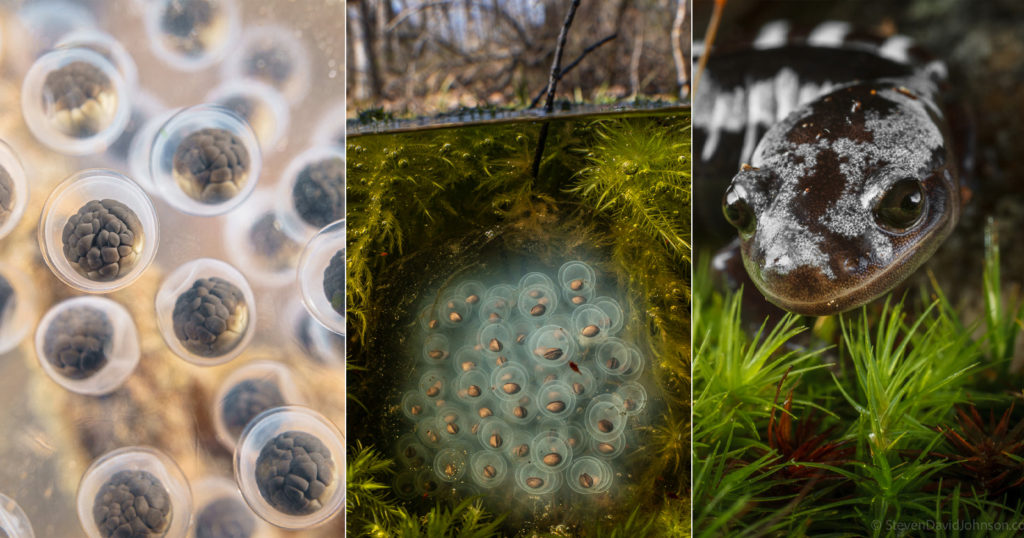 A conservation photographer has documented the unique biodiversity found in the vernal pools of Appalachia and has released a free e-book that shares the result of his years-long passion and provides tips to others who are curious about this type of photography.

Steven David Johnson is a Virginia-based conservation photographer and professor who has been published across multiple magazines such as Nature Conservancy Magazine, Virginia Wildlife, Orion, and others. Johnson has a lifelong dedication to documenting the natural world and is the Vice President of the Virginia Wilderness Committee and an Affiliate of the International League of Conservation Photographers.

Growing up in rural western New York state, Johnson was surrounded by forests, ponds, and the Genesee River and as a result, newts, toads, and fireflies became a regular part of his childhood exploration. His early love for nature grew into the pursuit of an art major with a photo concentration in college and continued through a degree in digital media studies in grad school.

As an adult, Johnson moved to Virginia in 2005 and became a photography teacher at Eastern Mennonite University. He tells PetaPixel that nature photography became a way for him to understand and communicate about his new environment, most notable learning about the central and southern Appalachians, which provide biodiversity hotspots for salamanders — with more than 50 species in Virginia alone. Johnson says that this fueled his macro photography skills as he learned to document salamanders, frogs, and other — often hidden — life forms in the forests. He eventually moved to underwater photography to capture complete life cycles.

The vernal pools of Appalachia — which is the central stage for Johnson’s photography work and the basis of his e-book — are temporary bodies of water formed from seasonal rains and snowmelt. This environment is ideal for many egg-laying creatures and in late winter and early spring, these pools host breeding events for amphibians and macroinvertebrates.

“There’s a tiny world of beauty and complexity that deserves appreciation and protection,” writes Johnson in his e-book.

Although documenting vernal pools life cycles is cyclical — because the same events happen annually — each year brings an additional layer of complexity, depth, and new discoveries about behavior.

“It’s a dramatic cycle that takes place on a minute scale,” explains Johnson.

Johnson’s goal is not just to document biodiversity and behavior, but also to “help viewers to experience an emotional connection with the amazing creatures that live in vernal pools,” which means getting close with a low perspective using macro and wide-angle lenses.

To capture the fascinating underwater world, Johnson uses two sets of cameras. The first one is Sony Alpha a6500 in a Fantasea underwater housing with Sea&Sea YS-01 strobes and Light and Motion Sola video lights. He uses either a Sony f/2.8 Macro lens or a Sony 16-50mm f/3.5-5.6 lens in conjunction with a Nauticam WWL-1 Wet Wide lens.

His other camera setup uses a Sony a7R III in a Seafrogs underwater housing with the same lighting tools along with either Sony FE 50mm F/2.8 Macro lens or a Venus Laowa 25mm f/2.8 2.5-5X Ultra-Macro lens.

Johnson switched to mirrorless cameras in recent years as he says that it is much easier to observe an LCD viewfinder than an optical one when the camera is submerged in water. Although, in deeper pools, it is sometimes necessary to position the camera a couple of feet below the surface, which makes viewing the LCD difficult. At times, Johnson also positions the camera and tries focusing without actually seeing the camera screen.

Shooting late at night — during winter and early spring — makes good lighting a necessity. The Sola underwater lights serve as general flashlights for his fieldwork and as focus lights. In addition, he uses one or two underwater strobes attached to an underwater housing for most of his vernal pool stills, although positioning them requires a lot of patience and experimentation.

“I’ll often experiment with lighting setups on action figures at home before heading out into the field,” he says. “Yoda and Hammerhead are my standbys.”

Although this is his personal choice of equipment, Johnson explains that shouldn’t deter beginners. Shallow freshwater environment photography equipment can range from setups as simple as a waterproof phone to a full-blown underwater housing with attached strobes and video lights. Just using a smartphone can be enough for burgeoning photographers to try their hand at documenting underwater life, especially when choosing an app that allows manual focus and even underwater time-lapses. The ability to shoot video on smartphones can be helpful as are add-on lenses that allow macro or wide-angle photography below the surface.

As an experienced professional, Johnson is familiar with health and safety practices. For example, when he descends into deeper water with chest waders, he moves slowly and chooses his steps with care. In order to reduce the possible transmission of disease, he dips his wader boots into a mild bleach solution and scrubs off any mud before traveling between watersheds. Johnson also notes that he avoids using insect repellent because it can impact fragile freshwater environments.

Johnson also says that a reliable GPS is essential since this type of work requires shooting in the dark forests, as is an extra load of batteries for the equipment. To protect himself and his equipment in the case of rain, Johnson dresses in layers and brings a poncho and a camera bag cover. He also started wearing shoulder-length waterproof gloves to extend his working time seeing as early-season vernal pools can make fingers numb.

Regardless of the available equipment a photographer has access to — whether it is a smartphone, a compact camera, a DSLR, or a mirrorless — Johnson recommends simply starting by taking photos in their own backyard. Observing the living world that photographers have at their doorstep will provide a good entry to documenting it, such as “jumping spiders ambushing flies inside of flowers, spicebush caterpillars mimicking snakes, and green frogs competing for mates,” and more.

In his free e-book, titled “Vernal Pools: Documenting Life in Temporary Ponds,” Johnson provides a detailed insight not just into his own findings and the resulting imagery but also practical equipment suggestions, lighting strategies, and general tips on working with this type of environment.

Image credits: All images by Steven David Johnson and used with permission.