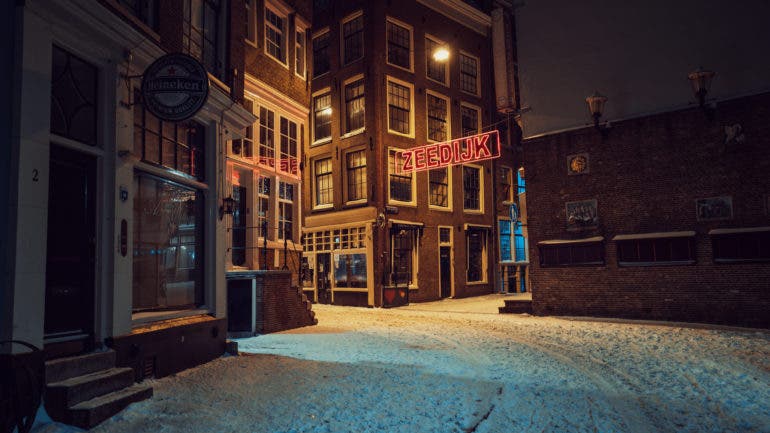 “All of these pictures were taken in one night, as a snowstorm covered the Netherlands,” Stijn Hoekstra tells me. It was the winter of 2021, and amid the COVID-19 crisis, the country had imposed a mandatory curfew from 9:00 PM to 4:30 AM. That night, he left home at 9:00 and returned at 3:00 in the morning, exploring the deserted streets and peering into lonely storefronts in silence.

“I was not permitted to go outside without any legal reason, so it was kind of a risk,” the photographer admits. “The only people on the street during that time were dog owners and the police. I came across many police officers, but since it was so cold and stormy, they didn’t bother checking my papers.” If caught without the requisite papers, he would be fined 90 Euros. For Hoekstra, the opportunity to document an empty Amsterdam, with its familiar landmarks veiled in white, proved priceless.

“I really fell in love with photography four years ago. My relationship had just ended weeks before we were supposed to go to New York and Cuba. I decided that I would still go, although I doubted it in the beginning. I bought some old M42 lenses and went on my journey. There were times it was hard being on my own, but I just focused on photography for four weeks. That trip gave me so many photos that I’m still proud of to this day. “

Eventually, the sun would rise, and daily life would resume. But for a few hushed and chilly hours, Hoekstra had the city to himself, with just the wind and the streetlights to keep him company. “Walking over Dam Square early in the morning and late at night with nobody there was special,” he admits. “Normally, it’s packed with people, and there was no one.” We asked him about the experience.

The Essential Gear of Stijn Hoekstra

“I have been using Sony cameras for the last four years, and they have never let me down. I just bought the Sony A7RIII after shooting with the Sony A7RII for the past few years. The lenses I used were the new Tamron series ultra-wide and the 28-75mm. The only other thing I used was my Manfrotto tripod. I have been working with this kit for so many years, so I know what to expect, and it saved me a lot of frustration in the cold weather.”

Phoblographer: You made these photos during quarantine. When you went out to shoot these, did you have any anxiety about the virus?

Stijn Hoekstra: I never really worried about getting the virus. I keep my distance, and going out on a night like this would mean not seeing anybody, so that’s pretty safe. Walking through the empty streets was a bit eerie sometimes. Because of the snow, every sound was muted, and that made it very strange. Walking all alone in a city you know so well is quite an experience, and it’s one that we hopefully will never have to experience again.

Phoblographer: What is it usually like in Amsterdam during this time of year? What would you expect to see were it not for the pandemic and the curfew?

Stijn Hoekstra: I’ve lived in Amsterdam for the past ten years, and I’ve moved within the city about ten times, so I got to live in different neighborhoods. I know the city well, and without the curfew, it would have looked so different. When there is heavy snowfall, the whole city comes out, and everybody enjoys the snow. There are people on sleds and snowball fights on every corner. It is always a special moment when the city turns white. It is even better when the canals are frozen, as you will see people ice skating.

Phoblographer: What was the curfew like for you personally?

Stijn Hoekstra: My son was born on the first of December. A little later, the curfew started, so I was indoors most of the time already. Having a little kid changes your whole schedule, and feeding him every three hours meant having strict planning. So I didn’t have a very hard time staying indoors.

When the pandemic showed itself for the first time in The Netherlands in March, I went out to document the empty streets during the day. That’s when it struck me, and I felt sad about the whole situation. This was also the time that all of my paid projects were canceled and everything in life felt very uncertain.

Phoblographer: What are your feelings about how Europe has handled COVID in general?

Stijn Hoekstra: I think this came as a complete surprise for everybody, and of course, there are things that didn’t go great, but I feel blessed living in a country where there are solutions for problems like these.

Phoblographer: Did you explore Amsterdam by foot or car last winter? How did you hold up in the cold?

Stijn Hoekstra: I went out on foot. This is normally how I shoot my pictures and [it] gives you more freedom. And I also knew that it would have been difficult bike-riding through the snow and slippery streets. The cold was okay; I wore a lot of clothes to protect myself. Fortunately, I didn’t face any problems. The only thing that I needed to change more often were my batteries.

Phoblographer: What technical challenges did you face in this lighting, and how did you navigate them?

Stijn Hoekstra: I worked with the tripod and longer shutter speeds. This gave me more light to work with, but I knew that I still had to find some interesting lighting. Amsterdam is not a city with [many] neon lights, so I had to find other interesting spots. The benefit of shooting in snow is that the white illuminates everything.

Phoblographer: What do you hope to see when you look back at these photos years down the road?

Stijn Hoekstra: I just hope this is the only time that I have to see the city like this. From an artist’s point of view, it is very special to document a city in these conditions, but facing a pandemic once more would be a catastrophe for mankind.

Phoblographer: Why did you first embark on your journey as a photographer?

Stijn Hoekstra:  I really fell in love with photography four years ago. My relationship had just ended weeks before we were supposed to go to New York and Cuba. I decided that I would still go, although I doubted it in the beginning. I bought some old M42 lenses and went on my journey. There were times it was hard being on my own, but I just focused on photography for four weeks. That trip gave me so many photos that I’m still proud of to this day.

I have been photographing for six years and only four years professionally. It sometimes takes a lot of commitment–going out in the streets, not sure if you’re embarking on something special. That was also the case for this project, although I knew from the beginning it would be special taking photos of these empty streets.

Phoblographer: The curfew just ended in April. What was it like for you when it was lifted?

Stijn Hoekstra: After the curfew ended, not a lot changed at first. The streets were just a little more crowded, but the weather wasn’t that good. Now that the summer has finally begun, however, people are hanging out on the streets and a lot more is possible. My evenings are still very much planned around my six-month-old son, but it’s easier to meet people during the evening, which is something I definitely missed.