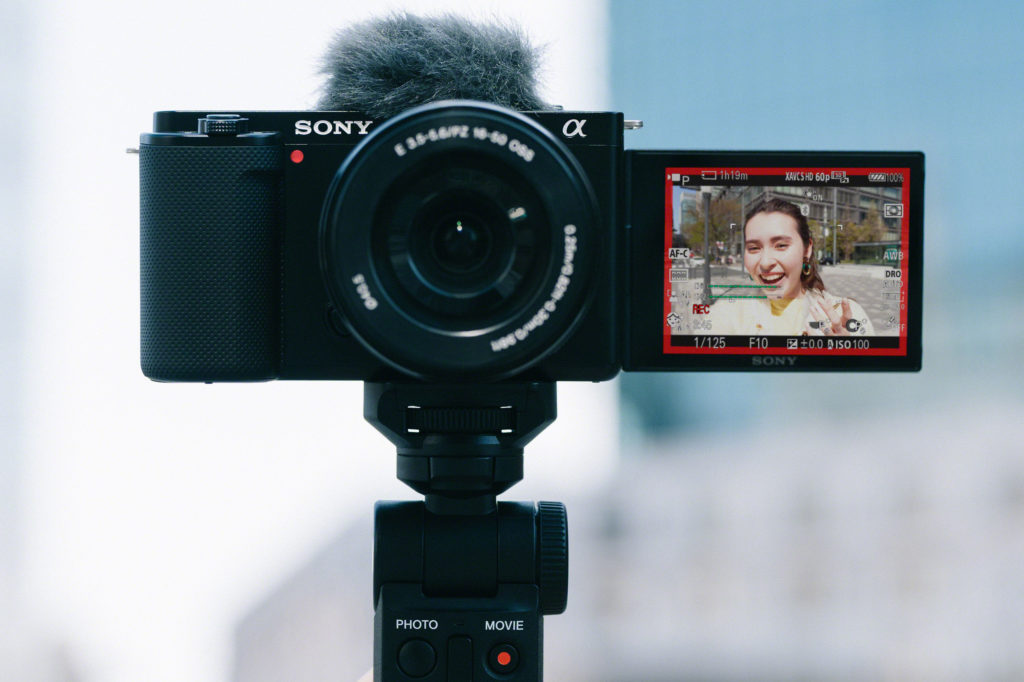 After a series of leaks and delays, Sony has launched the ZV-E10, an interchangeable lens camera that’s specifically designed for vloggers. As such, it’s an E-mount model with an APS-C sensor that’s based on core technology from the Alpha 6100, but redesigned to be a simple, easy-to-use tool for those who wish to make videos for social media such as YouTube or Instagram.

Sony’s ZV-E10 takes many ideas from last year’s ZV-1, but has a larger 24MP APS-C sensor and accepts interchangeable lenses

As its name suggests, the ZV-E10 includes many of the same features as last year’s ZV-1 compact. It has a fully articulated rear screen that can be set to face forwards for self-recording, joined by a sophisticated three-capsule microphone on the top plate for recording high-quality audio.

It’s also capable of working as a webcam out of the box, including USB Video and Audio Class Device support, which should allow it to deliver both video and audio feeds via its USB-C port without the need to install specialist software on a computer.

The autofocus can be set to follow a specific subject by tapping it on the touchscreen.

Like its compact sibling, the Sony ZV-E10 employs a simplified control setup that’s designed to provide easy operation for novice users. For example, a Bokeh Control button on top (marked C1) toggles the aperture between wide open for maximum background blur, and stopped down to f/8-f/11 for extended depth-of-field.

Another button on top cycles between shooting stills, movies, and slow- and quick-motion video. There’s even a compact-camera-like zoom lever around the shutter button to control power zoom lenses.

The top of the camera features an accessory shoe with a digital audio interface, alongside a three-capsule microphone

Sony has also included its Product Showcase mode, in which the camera will rapidly shift focus from the presenter’s face onto an item held out in front of the camera. This can now be used for hand-held recording, unlike on the ZV-1, which disables image stabilisation when Product Showcase in engaged.

Other vlogger-friendly features include a tally light on the front of the body that indicates when the camera is recording, backed up by a prominent red outline around the onscreen display. Face Auto Exposure promises to keep the presenter looking properly lit, even through large changes in ambient or background lighting.

A red tally light on the front indicates when the camera is recording, with the screen also being outlined in red

Portrait-format recording for Instagram and TikTok is supported, with the camera tagging the footage accordingly when it’s transferred to a computer or smartphone for uploading. On that note, it’s now possible to transfer 4K footage to a smartphone via the Imaging Edge Mobile app.

There’s no in-body stabilisation, with the camera instead relying on electronic stabilisation to keep footage steady, complemented by optical IS with lenses that provide it. Sony’s Active Mode IS, which proved very effective on the ZV-1, is again provided, but at the cost of a slight field of view crop.

On the side you’ll find microphone, headphone, HDMI and USB-C ports.

In principle the ZV-E10 promises a step up in video quality over the ZV-1, thanks to its larger sensor that employs 6K oversampling to deliver highly detailed 4K footage. It’s also now compatible with Sony microphones that can deliver high-res audio, via its multi-interface shoe on the top plate.

Conventional microphone and headphone sockets are built in too, with the former being placed so as not to block your view of the screen or impede its rotation. Meanwhile a wind-shield is supplied for the integrated mic for outdoor recording, that slips onto the accessory shoe.

As a stills camera, the Sony ZV-E10 offers similar specifications to the A6100, although at 113 x 64.2 x 44.7mm and 346g in weight, it’s rather smaller and lighter. Its 24.2MP sensor provides a sensitivity range of ISO 100-32,000, expandable to ISO 50-51,200, while supporting continuous shooting at up to 11 frames per second. Autofocus employs a fast hybrid system, courtesy of on-sensor phase detection pixels, and supports Sony’s Real-Time Eye AF and Real-Time Tracking.

Overall, the ZV-E10 looks like a well-judged design for its intended audience. But it probably isn’t a camera that will appeal strongly to photographers who are primarily interested in shooting still images. It’s due in the shops in August for either £680 body-only, or £770 with the compact, retractable E 16-50mm F3.5-5.6 OSS lens. However, Sony recommends using it with the E 10-18mm F4 OSS wideangle zoom, which costs £630.