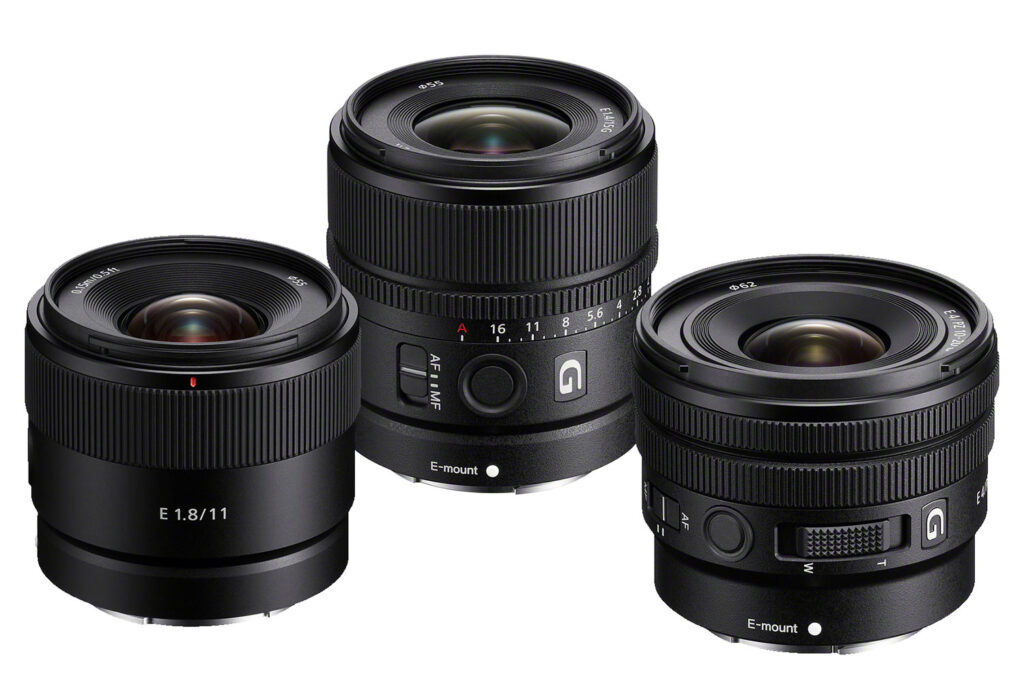 You wait ten years for one, and then three come along at once. It’s just three months shy of a decade since Sony last released a wideangle lens for APS-C cameras, the E 10-18mm F4 OSS. Now it’s released three more all at once. The Sony E 11mm F1.8 is the relatively affordable option, at £500, while the premium Sony E 15mm F1.4 G prime and Sony E PZ 10-20mm F4 G powerzoom will both cost £750. All three lenses are due to go on sale this month.

Sony sees the E 11mm F1.8 as being ideal for vloggers using the ZV-E10 camera

Looking first at the Sony E 11mm F1.8, this compact, lightweight lens combines a 16.5mm equivalent angle of view with a relatively large f/1.8 maximum aperture. It’s primarily aimed at vloggers using the ZV-E10 camera, who wish to record themselves at arm’s length and get some degree of background blur. But it could also be of interest to photographers seeking a small, lightweight wideangle. On this note, it measures 66mm in diameter and 57.5mm in length, while weighing just 181g. The lens accepts 55mm filters and focuses as close as 12cm.

Second is the Sony E 15mm F1.4 G, which is a more upmarket option that aims to be equally attractive for both stills and video. With a 22.5mm equivalent view, it should nicely complement a standard zoom, particularly in situations where the extra light gathering of the fast f/1.4 aperture comes in handy. As a G-series lens, it promises premium optics and weather-sealed construction. It also gains useful external controls, including an AF-hold button and an aperture ring that can be switched between clicked and smooth operation. Physically, the 15mm f/1.4 takes the same 55mm filters as its 11mm sibling but is a little larger, at 69.5mm long, 66.6mm diameter and 219g. Its minimum focus distance is just 12cm.

Last but by no means least, the Sony E PZ 10-20mm F4 G is a compact powerzoom lens that’s essentially an APS-C version of the recent full-frame FE PZ 16-35mm F4 G. It provides a 15-30mm equivalent range when used on a Sony APS-C camera. With an internal zoom and focus design, its length or balance never changes, making it ideal for video work using a gimbal. As a G-series lens, it also boasts weatherproof construction, an AF/MF switch, and an AF-stop button. To operate the zoom, there’s a choice between either a conventional zoom ring or a lever on the side.

At just 178g and 55mm in length, the new zoom is noticeably shorter and lighter than the existing 10-18mm f/4. However, while it could certainly be interesting to photographers using the Alpha 6500 and Alpha 6600 bodies, its lack of optical stabilisation makes it less appealing to owners of other A6000-series bodies. They may prefer the 10-18mm f/4, which costs £120 less and is optically stabilised, but lacks any weathersealing.