Sony A7 IV vs A7 III: what’s the difference, and what’s new? – Amateur Photographer 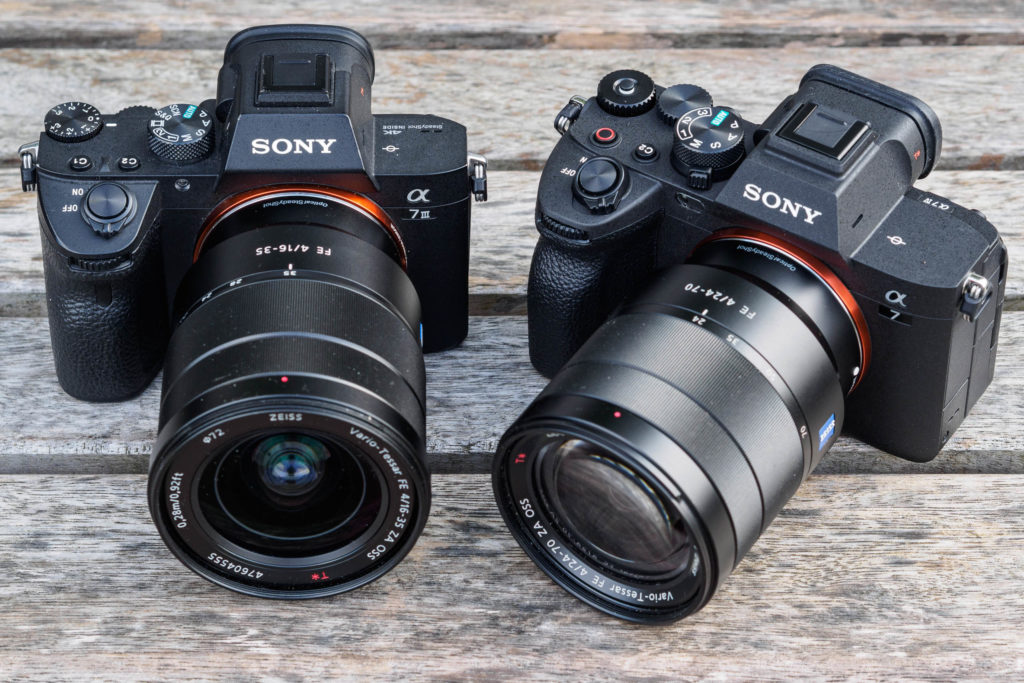 Sony has just announced the Alpha 7 IV – the follow-up to its hugely popular, and successful Alpha 7 III from 2018. You can read our detailed first impressions review of the Alpha 7 IV here, but in this article, we’re looking at what design changes and new features the A7 IV offers over its predecessor. We’re not going to do a line-by-line specification comparison, but instead concentrate mainly on body design and hardware changes and how they affect the camera’s usability.

Sony A7 IV vs Sony A7 III: new sensor and processor

Both cameras provide the same sensitivity range of ISO 100-51,200 as standard, extendable to ISO 50-204,800. The only difference is that on the A7 IV, you can now use this top ISO setting for video as well as stills.

Both cameras can shoot at 10 frames per second, but the A7 IV can keep going much longer before slowing down, although only if you use a CFexpress Type A card.

Both cameras record 4K video at 30fps from the full sensor width. But the A7 IV gains a plethora of more advanced video features, along with the ability to record 4K 60p in Super-35 / APS-C crop mode.

Sony A7 IV vs Sony A7 III: revised control layout

The A7 IV (below) gains a new stills/video mode switch and a top-plate record button, while the exposure compensation dial is unmarked

There are some notable changes on the A7 IV when it comes to control layout. You now select between stills, video and fast/slow motion shooting using a separate switch that’s stacked beneath the mode dial, with the latter two options disappearing from the mode dial as a result. In exchange, there’s an extra custom setup position, marked 3.

The video record button has also moved to the top plate, with the C1 custom button swapping into its old position beside the viewfinder. These buttons are customisable, though, so you can switch them back again if you like.

Here’s a close-up of those top-plate controls; A7 IV left and A7 III right

The dial on the camera’s shoulder that was dedicated to exposure compensation is now unmarked and freely rotating, with a toggle lock switch in its centre. It still controls the same function by default, but you can now reconfigure the camera’s four control dials to work as you see fit.

The dial alongside that was previously embedded into the camera’s back is now more accessible on the top. But I found that it’s also more easily confused with the exposure compensation dial, when shooting with the camera up to your eye.

Sony A7 IV vs Sony A7 III: rear controls

While the rear layout is similar, key controls on the A7 IV (right) are larger and easier to use

While the rear layout of both cameras is basically the same, both the AF-ON button and focus-area joystick are larger and easier to use on the A7 IV. You can also see how the C1 button is now beside the viewfinder.

This view also shows more clearly the A7 IV’s stills/video selector switch beneath the mode dial. It has a button on its front that has to be pushed inwards to change the operational mode.

What’s not visible here, but equally important, is that the A7 IV’s rear screen offers significantly expanded touch functionality over the A7 III, while also being noticeably more responsive. You can now use it to navigate the Fn menu and the main menu, and change settings in both. On the A7 III, it could only be used to set the focus point when shooting with the rear screen, and zoom into images in playback mode and then scroll around them.

Sony A7 IV vs Sony A7 III: screen and menus

Sony has fitted the A7 IV with a fully articulated screen, and used its updated, improved menu layout

On the subject of screens, there’s a really a significant difference in terms of articulation.

The A7 III’s dual hinged design can tilt up and downwards with the camera in landscape format, with a design that’s quick and easy to use. But the moment you rotate the camera 90° to shoot in the portrait orientation, that tilt-only design becomes essentially useless.

On the A7 IV, the side-hinged design gives far more freedom, facilitating low or high-angle shooting in both landscape and portrait formats. The screen can also face forwards for selfies and vlogging.

The main disadvantage is that the A7 IV’s screen can be slower to reposition. Some users also find that its position to the side of the lens axis makes for unintuitive compositional adjustment.

Sony A7 IV vs Sony A7 III: viewfinder

Sony has upped the viewfinder resolution from 2.36m-dots to 3.68m-dots on the A7 IV.

Both cameras have a similar-sized viewfinder. But the A7 IV’s employs a higher resolution panel, at 3.68m dots. Combined with an improved live view feed, this makes it visibly that bit sharper and clearer than the A7 III’s.

Above the viewfinder, the A7 IV’s hot shoe now includes digital audio interface for wireless connection of a compatible microphone, such as the £339 Sony ECM-B1M.

Here you also get a glimpse of the A7 IV’s much-improved ports covers – more on them later.

Sony A7 IV vs Sony A7 III: handgrip

The A7 IV gains a considerably taller, deeper grip compared to its predecessor

While the A7 III’s handgrip was a big advance over the older A7 II, it’s still a bit too small for many users, and doesn’t have quite enough depth to wrap your little finger around it.

On the A7 IV, the grip is much bigger, being both taller and deeper. This makes it much more comfortable to hold, and more secure when shooting with large telephoto lenses.

Despite the larger grips, the body dimensions and weight are only slightly increased

Here you can see how the grip manages to be taller without significantly increasing the overall body dimensions.

The memory card door has a different, more secure design too; instead of springing open when you push down the switch, you have to push down the latch and then slide the door backwards.

Sony A7 IV vs Sony A7 III: Storage and CFexpress

Both cameras have dual SD card slots, but on the A7 IV, one will also take CFexpress Type A

While both cameras have two SD card slots under a door on the side of the handgrip, the upper one on the A7 IV will also accept the faster, but much more expensive, CFexpress Type A cards.

This is also now designated slot 1, which is more logical than on the A7 III, where slot 1 was the lower of the two. This might seem academic, but could make a difference when you’re formatting a new card in a hurry.

As with other Sony cameras, straight out of the box the A7 IV will essentially ignore the fact that it has a second card slot. You have to decide how to use it and then set this up in the menus.

Sony A7 IV vs Sony A7 III: connector ports

Significant improvements here, with the A7 IV’s chunky, hinged ports inspiring much more confidence in the camera’s weather-roofing compared to the A7 III’s floppy covers that are only attached at one corner.

Sony has placed the A7 IV’s microphone input high on the shoulder, where it won’t interfere with the screen’s articulation. Plugging in headphones will however restrict the screen’s movement, which isn’t helped by the fact that the port has a larger cover than necessary.

Serious videographers will also appreciate the full-size HDMI connector, which should be much less prone to having the cable knocked out.

The A7 IV’s USB-C connector offers faster transfer speeds, as it supports the USB3.2 standard. The camera also retains the Micro-USB multi-connector, into which you can plug a wired remote release.

Sony A7 IV vs Sony A7 III: summary

It’s no great surprise that, three and half years after the A7 III’s launch, its successor is a significantly improved camera that boasts a higher specification in almost every department. It also has an array of control updates, most of which make perfect sense and improve the shooting experience, although not radically. Some existing users may be perturbed by the loss of the marked exposure compensation dial, but when shooting with the camera up to your eye, it makes very little difference to the overall experience.

There’s plenty here for both photographers and videographers to consider upgrading from the A7 III. For users of older-generation Alpha 7 models such as the A7 II, Sony’s new camera is a huge step forwards in both capability and usability. If you have the funds, it’s a very worthwhile upgrade.

Compared to the competition at a similar price point, it’s a close call. Canon’s EOS R6 offers rather lower resolution, at 20MP, but is an incredibly accomplished camera that also works well with legacy Canon EF-mount DSLR lenses, as long as you can find an adapter available to buy. Nikon’s 24MP Z 6II is more affordable, at £1900 body-only, and likewise, works well with many Nikon F-mount DSLR lenses. However, there’s a much wider range of native mirrorless lenses available in E-mount than either Canon RF or Nikon Z. Overall, we’ll reserve judgement on whether the Sony A7 IV is the new class-leader until we’ve conducted our full, in-depth review.