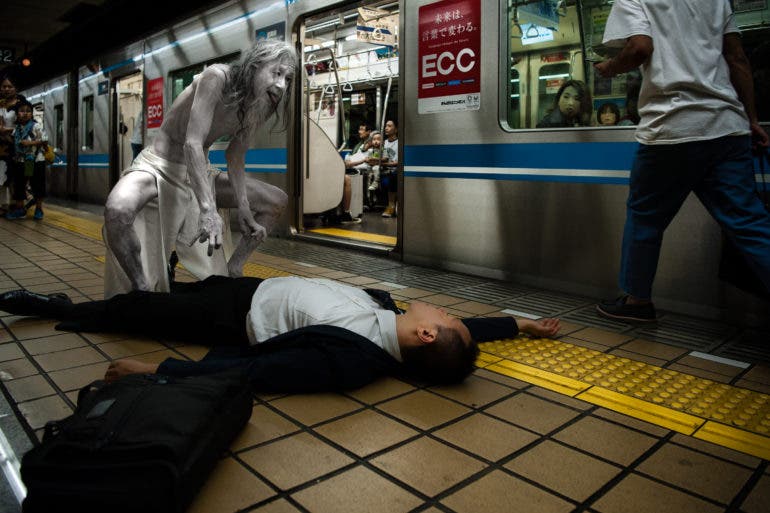 “Then, over time, I realized that there was nothing to understand,” says photographer Silvia Alessi about her Maze of Metamorphosis series. “It is a physical dance, not a conceptual one. The performer becomes things, he does not interpret them.” For sure, Maze of Metamorphosis is a series that will have you staring at the beautiful images. But you’ll also try to figure out everything that’s going on as each frame is packed with details. The importance of framing is surely a part of what Silvia is putting forth in this series.

The Essential Gear of Silvia Alessi

This question allows me to illustrate the way I work. I am not focused on photographic technique, perhaps I am not even a photographer, rather an illustrator who uses a camera. Almost all the time I dedicate to this activity I use to think about how to bring together different people and experiences in one figurative artistic context that allows me to make an “artistic fact” happen. Of course, I know the equipment, the lights, and the theory of colors, but my effort is all aimed at making a vision happen and capturing it in my viewfinder.

The real difficulty I encounter is therefore finding the subjects and the story (I am attracted by marginal stories) and making them coexist within my artistic view. To give an example, during my last shoot I spent a month organizing subjects, sets, props, drawing the poses, and only the night before the shooting I set up the photographic equipment

Phoblographer: Talk to us about how you got into photography. What made you want to get into fine art and conceptual work like this? It’s also sort of documentary work as well, right?

Silvia Alessi: I started photographing for the first time during my travels in Asia. For this reason, my imprint is that of reportage, in search of stories worthy of being told. Then my artistic side prevailed. I am a hairdresser and make-up artist, and I have always considered haircutting a way of expressing creativity. This attitude of mine, mixed with my anxieties, my visions, my dreams have pulled me to create strong, surreal, daring portraits around the world.

Phoblographer: Anxieties? How did they help steer you with this photo series?

Silvia Alessi: The mass of ideas that rotates in my head and in my heart is so enormous that sometimes I feel like I cannot grasp it, and this is a source of anxiety. A bit like it happens with butoh: While looking for a sense we get lost. To accept being overwhelmed by a lack of sense, however, one must be very strong, and I don’t always feel this way. Sometimes it seems to me as I would write a play in one night, or collect the sea in a bucket. My only medicine are the persons I portray, my subjects. I think a lot about them, their stories. I find comfort in them. My photography wishes to be a dance with them.

Phoblographer: What made you want to create this photo series?

Silvia Alessi: My Maze of Metamorphosis series was born when I first got to know the Japanese dance Butoh. At first, I did not understand it, I observed in ecstasy these naked dancers painted in white who moved in silence opening their mouths wide. Then over time, I realized that there was nothing to understand. It is a physical dance, not a conceptual one. The performer becomes things, he does not interpret them. He does not convey messages, he only shows his body, which is his everything. And the viewer cries, because sooner or later you cry, there’s nothing you can do. All this opened up a new world to me: what if I told some Japanese social issues through Butoh? Any difficulty in this hyper-performing Country tends to be removed, it is a hard task to tell a social issue when you deal with very high standards. And so, here is the dancer who becomes a hikikomori (a person who isolates himself from society, even for decades, because he or she cannot stand comparison with a too competitive world); or a salaryman (a white-collar who dedicates his entire life to work and to his Company, giving up everything else). In search of the marginalized, I came across the amputated women who, thanks to the beautiful prostheses made for them by Fumio Usui, walked the catwalks, discovering a space of beauty and meaning otherwise precluded.

Phoblographer: What was it like getting these photos? Were there any difficulties? There’s a lot of stuff happening in public here and folks looking at what’s going on.

Silvia Alessi: I could have done nothing without a mediator, a fixer who helped me with Logistics, to recruit the subjects, and to have a correct attitude towards them. The guerilla shootings were extremely creative, thanks also to the presence of a phallic sculpture that I asked an artist from my town to create for myself. I was amazed by the composure of the passersby who remained impassive while I was taking my photos on location, in a metro station, in a train, in a temple.

Phoblographer: I read the description for this series a few times. So, the penises, does their inclusion have anything to do with the revolt against culture that is spoken about in the description? In some scenes they’re being shown as something of a burden and in others, they’re being revered.

Silvia Alessi: I was asked: Why the phallic statue? Why the penises? Well, my creative process grows with unconscious stimuli: I did not want to send messages of any kind. This image was suggested to me by the fact that transgender people must first be sterilized in order to change identities. The image of the penis is twofold because the Japanese reality is ambiguous: on the one hand, there is no oppressive morality, indeed the phallus is revered as a deity, on the other, there are mental limitations, as sex is perceived like a problem in a sexless society getting older and more attentive to appearances, respectability, career. I wanted to show something deeply affecting our psyche. There is a connection with Butoh, yes, that is originally a revolt against culture.

Phoblographer: When you were editing the series down, what made you choose these specifically? What themes made them stand more than the others?

Silvia Alessi: The themes that I have chosen are three, eventually: the difficulty of showing the taboos (Hikikomori and self-imprisonment; Salaryman and the other side of strict conformity; death in the digital age) with the help of Butoh; beauty and art as a way out from marginalization (amputated women); sex in a sexless society. Everything in a connection of symbols.

Phoblographer: Do you feel like color is important to this series?

Silvia Alessi: I have always shot in color because my visions are in color. Color speaks to the unconscious. Black and white enhance the drama, but as it is not the only feeling I want to explore, I need a range of colors that allows me to do so. White is an ambiguous one and is predominant in this series.

Phoblographer: What’s the clear cube on his head representing?

Silvia Alessi: The transparent plexiglass cube is the representation of the hikikomori room. It is both a refuge and a prison, but unlike the room, it is transparent, allowing you to see through. It is as if the subject maintains the protection he wants for himself, but at the same time allows him to be seen, to be understood, to be considered. It is no longer like the dust swept under the rug, but as a thing to be reckoned with, a situation that exists and that, in order to be faced, requires first of all being seen. The same for the salaryman, who is the counterpart of the hikikomori.

Silvia Alessi was born in Bergamo, Italy in 1975. She has worked as a hairstylist and make-up artist since she was 17. In 2004, while on a trip to Asia, she discovered an interest in reportage photography. She has since traveled extensively pursuing her passion for photography and “telling stories worthy of being told.”

Over the years with her growing experience, Silvia believes that she cannot define herself as a photographer, but rather an illustrator with a camera. She is not interested in photographic technique, but in creating artistic situations by conveying different people and their experiences in a single space together with her own disturbances and visions. Looking at her works you can perceive this approach: in Japan (Maze of Metamorphosis, 2019) she portrayed a butoh dancer with a hikikomori man, a geisha with a transgender dancer; in Iraq (Beyond the Line, 2018) she portrayed a gay boy with peshmerga female soldiers. In India (Skin Project, 2017) she portrayed acid-scarred women with people suffering from albinism.

Behind her portraits there is always the true story and a sincere documentary interest, which is transfigured in the artistic vision, like a magical space where something new and unique happens. Some of her works were published on Creative Image (India), Vredes Magazine (Netherlands), Fit For Fun (Germany), The Guardian, The Daily Mail, BBC World Service (UK) and exhibited in Berlin (Germany), Manila (The Philippines), Moscow (Russia), Milan, Bergamo, Verona, Sardinia (Italy), London (UK), Middlebury, Minneapolis (USA), Paris (France).

All images by Silvia Alessi. Used with permission. Be sure to check out Silvia’s Website.