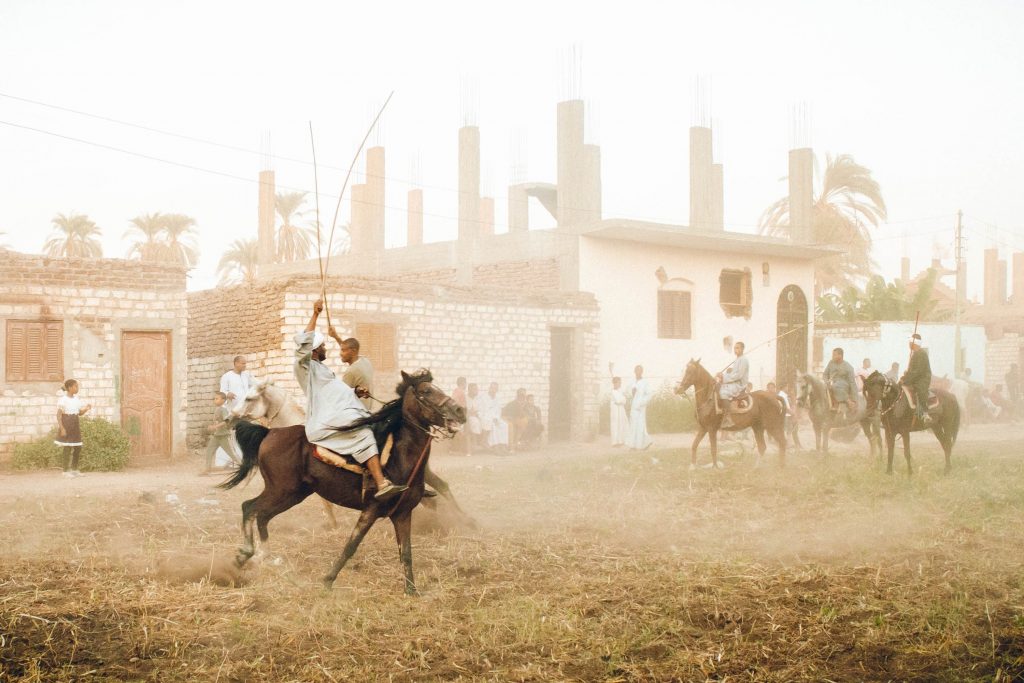 All images by Shady William. Images used with permission.

“I am usually attracted to subjects who have incredible stories but their voices are hard to hear,” says photographer Shady William, “a man travelling hundreds of miles just to touch a shrine for a quest precious to his heart, or a farmer who is also a great horse rider.” Inspired by people and different cultures, Shady William embarked on a cultural quest near Luxor, Egypt. His series, Horses & Knights, documents one of the world’s oldest fencing competitions between local tribes living there. At the same time, it documents an important cultural tradition. In Al-Marmah, locals ride for pride and the sake of tradition, demonstrating the incredible speed and power of their fantastic horses.

Here’s how you can have your photo project featured. We look forward to seeing your work!

The Phoblographer: Tell us how this project came to be, your connection to Egypt, and the sport?

Shady William: I have been working on [an ongoing] project for the past three years, and a part of it included covering religious festivals. I had known that Al-Marmah, which is the name of the sport (derived from the word meaning “running fast”) is held up in Upper Egypt at certain times of the year. I managed to plan a trip to Luxor… Due to Covid-19 I wasn’t sure [the contest] will happen until a friend who worked at one of the sites told me that it was held on a smaller scale, and I arrived at the end of two hours of it.

The Phoblographer: How did you get into photography? What subjects did you start out photographing?

Shady William: During [a] 2017 summer vacation, I took off abroad for a student exchange program. It was the first time I actually held a camera, and I enjoyed the ability to share my perspective of things with others. After returning to Cairo, I couldn’t help but holding the camera again and starting to capture every special corner for me in Egypt.

The Phoblographer: Your work feels incredibly special from a cultural standpoint. What subjects would you say interest you the most?

Shady William: I am usually attracted to subjects who have incredible stories, but their voices are hard to hear. A man traveling hundreds of miles just to touch a shrine for a quest precious to his heart, or a farmer who is also a great horse rider. People and cultures have compassionate and factual stories to tell, so I try to capture the cohesion of the subject’s emotions with as good compositions and framing as I can get.

The Phoblographer: What were some of the most exciting moments shooting the Horses & Knights series? This surely isn’t like any other sport out there!

Shady William: To tell you the truth, I didn’t know what to expect. I have photographed multiple festivals before but never one with such a sport. For me personally, the most exciting moment was this race and dance between two knights, and my guess they were famous, everyone was watching them.

The Phoblographer: What was your approach when it came to composition? The riders in the foreground look vivid and clear, but you’ve also managed to capture the crowds of spectators we can see through big clouds of dust.

Shady William: I didn’t have an exact strategy. I usually try as much as I can to convey the emotions emitted or surrounded by the subject. One of the very strong things you can feel in the place is the respect of the crowd and the prestige of a rider. I was lucky as well because the space was relativity small and… the dust coming from the horse’s movement gave an extra layer before the audience or whatever is in the back.

The Phoblographer: Can you tell us about what the crowd is like? This is a totally different spectator sport!

Shady William: The crowd in that celebration were merely the residents of the area, although very diverse in terms of age… Al-Marmah, revives the elders’ cultural heritage of upper Egypt. Training hard to compete in the ritual, the youth [show] their horseback riding skills, bonding over culture rituals and adventurous sport. Al-Marmah has been a tradition in Upper Egypt for hundreds of years. With hope, this adventurous and genuine tradition will continue to be celebrated.

The Phoblographer: Some of these photos look very close up. Can you talk to us about the dangers and safety precautions?

Shady William: At first, I was a little hesitant [about] how to position myself close enough to get good frames without getting too close. [Then] the riders started noticing me and encouraging me by getting close. The side of the arena in which I was standing helped a lot. Some [riders] even stood still… After an hour, I was confident, and the riders were aware of [me] enough to start moving around the arena…

Shady William: I shot with an entry-level Canon Rebel T6 until last year [when] I upgraded to the Canon full-frame mirrorless EOS R with RF 24-105mm f4 L IS USM Lens.

The Phoblographer: Tell us more about how the contests work. How is the winner decided?

Shady William: Al-Marmah originated more than a century ago. [There] is a large arena with [a] musical band accompanying the game in which the knights demonstrate their ability to fight and the art of horse riding. The race begins in Al-Marmah after the afternoon. [Riders are] armed with a long bamboo stick [and] the first ‘knight’ enters the arena and begins the ceremonial movements of an executioner, beating his opponent with the stick while the rival knight tries to block the hits. The winner is decided after each challenge by simply dominating the competition.

The Phoblographer: Do you have a favorite image of the series?

Shady William: My favorite in this project would have to be the photo where the band is playing at the right of the frame, and you can see multiple layers in the background. One of them is a knight attacking his opponent.

The Phoblographer: Horses, Arabians in particular, are treasured in your part of the world. Who looks after the animals’ welfare?

Shady William: Most of the riders and their families [are] usually very friendly with the horses, looking after, feeding them, and giving them nicknames. The horse is tied to prosperity and welfare in the minds of Egyptians. It simply brings happiness and luck. A winning horse is nearly worshiped by its tribe, and riding it is an honor. The knight who wins the race rides with the utmost prestige among his peers.

Al-Marmah has been a tradition in Upper Egypt for hundreds of years. With hope, this adventurous and genuine tradition will continue to be celebrated.

The Phoblographer: How is the community managing to keep cultural traditions like this alive during Covid-19?

Shady William: This was in November 2020 [when] most of the big cultural traditions, especially religious and crowded ones, were restricted by orders of the government. The scale of such an event is usually very crowded, participants’ numbers can reach up to thousands and sometimes more, and the celebration usually lasts for three days more. This celebration, however, was a small one relatively [and] only lasted for a few hours and was for a couple of families. I think some people are willing to take extra risk for things that matter to them.

The Phoblographer: What other stories or projects are you working on?

Shady William: I have been doing a lot of night photography for the past couple of months as well as working on a long-term project.

The Phoblographer: Has Covid given you any time off to contemplate new ideas?

Shady William: I started exploring excavation sites and Egyptian monuments [and] 3D photography. It requires [a] new technique and software that [is] fun to try out.

The Phoblographer: Where do you most look forward to traveling once it is safe?

Shady William: I have traveled to [the] Far East before, to Sri Lanka, but I still feel there is too much there to see. I guess I would go to Nepal if I had a choice.