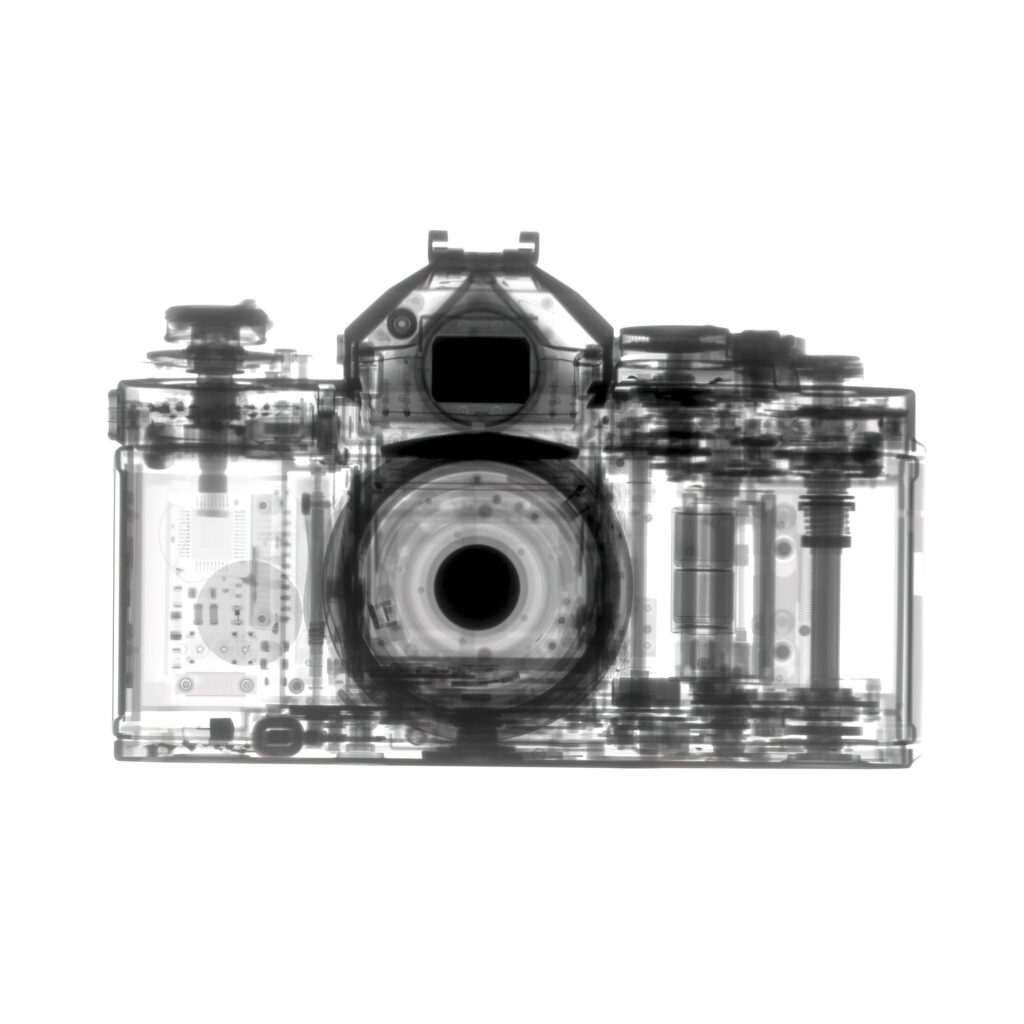 “You´ll never know what you get,” says Austrian photographer Mario Aumüller about the results of his experiments with an x-ray machine and vintage cameras. What started as a fun pastime has now picked up steam on Reddit, where analog lovers eagerly await Aumüller’s next post. He loves looking around for old cameras to collect so he can examine their insides in this most unique way.

I’ve often taken cameras apart, however, I’ve very rarely had the desire to x-ray one. Not having access to an x-ray machine might be a subconscious reason. But the thought of looking at cameras in this manner never really came to mind. It might be considered quirky, but it’s certainly an exciting way of demystifying the workings of your favorite analog cameras. I hope Aumüller never stops this series, as there’s probably no end to the number of cameras he can x-ray.

Mario Aumüller: My name is Mario Aumüller. I’m 35years old, and I’m currently living in Natternbach and Linz / Austria. For more than two decades, I have been a passionate skateboarder, and this is what eventually brought me to photography and other visual crafts such as silk-screening or darkroom printing. Skateboarding is very much about documenting what you are about out in the streets with your friends, so it was just natural to pick up a camera and try to emulate what we saw in the skateboard mags every month. After understanding the basics, I started to develop an interest in concert photography – as well as landscape photography, since we have plenty of it in Austria. If you would ever meet me in person, chances are high I have a camera in my pocket or dangling around my neck – it became an essential.

The Phoblographer: What camera gear do you use for your work?

Mario Aumüller: About 15 years back, I fully transitioned to film photography, and that’s what I have done exclusively ever since. I simply loved the look of a slightly grainy black & white photo or the colors of a good film cause I wasn’t able to achieve the look I was aiming for digitally. The second major thing which drew me to film photography was the craftsmanship and workflow – developing the negatives or the magic moment when you do your first darkroom print. Doing/having all that in its physical form really caught me.

Back then, analog cameras were much cheaper, and classic models were widely available, so I started to get all sorts of cameras I was keen to give a try. I had a common start with the Canon AE1 but also wanted to try rangefinders (Yashica Electro 35 GSN, Canonet 28, Olympus XA, Revue 400 SE…),  point and shoots (Olympus MJU, LOMO LCA, Canon Prima mini…) and for sure medium format cameras such as Bronica SQA, Agfa Isolette 3 or the infamous Holga – just to name a few.

My current go-to setup consists of a Canon F1 New with a 35, 50, and a 130mm Canon FD-lens, a random 35mm Point & shoot, and when it comes to medium format, I’m a big fan of the Bronica SQA (6×6) and GS1 (6×7) – all of that paired with some of my favourite films, such as Ilford HP5+, Rollei RPX400 or Kodak Portra 800. The topic “photo-backpacks” was always a big thing for me because, as a skateboarder, you´ll need something that’s rugged and can handle a few beatings. Finally, I’ve found my absolute favorite with the Shimoda Action X 30.

Pretty basic setup I have to admit. Nothing too fancy, but that’s really all I need.

The Phoblographer: Taking images of something that takes images. What gave you the idea for this quirky project?

Mario Aumüller: I´m really into the individual design of classic cameras, and an open door may tempt a saint – read on.

The Phoblographer: This series has accrued quite a following on Reddit. Tell us some of the more interesting comments you’ve received about these pictures.

Mario Aumüller: Since I made a camera guessing game out of the post, it had an overwhelming amount of comments. It´s way harder than one would think to identify an x-ray picture as a certain camera. Someone got the Yashica Electro 35 GSN right, just because they saw the stack of coins I’d put into the battery compartment to fit the new battery. Only a few people got them all correct. According to the wrong answers, the Olympus XA was the hardest to guess. A lot of people also wanted to know how I took the pictures and what´s the technique behind them.

The Phoblographer: Is there a selection process for the cameras you pick to be x-rayed? Are they all yours or do you also borrow cameras for this?

Mario Aumüller: It´s fairly simple – I just x-ray what I’ve got on hand. For the first series, it was all my own cameras, but recently I did a second run and therefore borrowed a few cameras from my good friend Max – for example, a wonderful Rolleiflex 3.5F or a Contax III. We love to go on fleamarkets and yardsale on the weekends and pick up classic cameras all the time – supply not isn’t going to end soon if you keep digging.

The Phoblographer: How do you do this? Is it from your own x-ray machine? Do you have access to one any time you want?

Mario Aumüller: I work as a High-Voltage Engineer in R&D, and an x-ray machine is a very helpful device to detect possible failures such as cracks, bubbles, or inclusions in solid insulating materials. We have such a machine in our lab, and I have unlimited access to it. Sure I asked my boss if it was ok to divert it from its intended use, but he was also curious about the outcome. So there is much more to come!

The Phoblographer: What are some of the more unique models you’ve taken x-ray photos of?

Mario Aumüller: The very first Olympus PEN model (1959), with its portrait-orientated viewfinder (half-frame) was a favourite of mine, as well as the Polaroid SX-70 – it simply looks good as an x-ray picture.

The Phoblographer: Have any of the innards of these cameras surprised you when you see the x-rays? Something in there that you didn’t expect?

Mario Aumüller: Unique in its own way was the Holga CFN because you can tell right away that there is nothing – not even a glass lens. Glass is so dense, it appears deep black on x-ray pictures, and the Holga lens is just bright. All the other cameras are packed with mechanics and electronics, but this one is so simple–fascinating.

Medium format cameras such as Bronicas are hard to get a good x-ray photo because those cameras are huge and there is so much going on from back to front that they usually don´t look very good – all messed up.

The Phoblographer: Is there a sense of excitement each time you take these x-rays? Almost like opening a package that’s arrived at your door?

Mario Aumüller: Sure, it’s always some kind of “Kinder surprise“; you´ll never know what you get, but my co-workers are often equally excited. They always gather around when I do some new pictures. Also, just because people are not used to seeing such cameras in real life. A Rolleiflex TLR is a fascinating thing when you see it for the first time.

The Phoblographer: Did any of these cameras have film rolls in them while you x-rayed them? How did it turn out if they did?

Mario Aumüller: No. I always make sure to double-check the cameras cause you will end up with a completely black roll of film. Our X-Ray machine is way more powerful than the one they use at the airport for example – just to turn it on for a second at 160kV would be enough to blacken the roll, no matter what ISO the film is.

The Phoblographer: Have people contacted you and offered to have their cameras x-rayed? What interesting projects do you have lined up next?

Mario Aumüller: I wouldn’t do x-ray pictures of cameras from random people – that’s way too much responsibility. My friend Max also has a great collection of classic Nikon cameras; I’m about to give them an x-ray treatment next. I´m curious about this one, because in my opinion, SLRs look the best when x-rayed. Also, a “point and shoot” series is in the making. I´ll do Art-Prints of all of them, because a lot of people have asked me about it. I have the first series hanging in my living room and I still find myself staring at it!

Besides that, I want to perform a power frequency withstand test with the help of a high-voltage transformer on a 120 roll of film. Just to see what it takes to produce a flashover from top to bottom and how the film gets affected by lightning. Many thanks for the Interview and the interest in my projects.

All images were provided by Mario Aumüller. Used with permission. Please see his Instagram page to see more of his creative x-ray work.