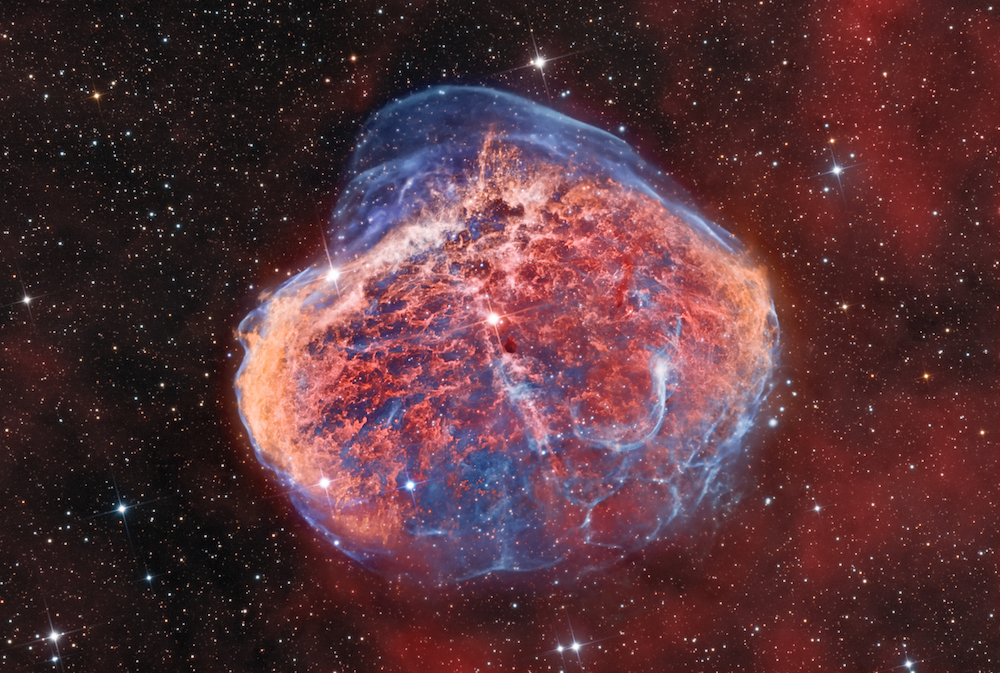 Incredible images of speeding comets, galaxies colliding, stellar nurseries, the Aurora Borealis dancing across the night’s sky and more all feature in the shortlist for this year’s Astronomy Photographer of the Year.

Now in its fourteenth year, Astronomy Photographer of the Year is run by the Royal Observatory Greenwich, supported by Liberty Specialty Markets, and in association with BBC Sky at Night Magazine.

The 2022 competition received over 3,000 entries from passionate amateur and dedicated professional photographers, submitted from 67 countries around the world.

It has an expert of panel of judges from the worlds of art and astronomy.

The winners of the competition’s nine categories, two special prizes and the overall winner will be announced during a special online award ceremony on Thursday 15 September 2022.

However, in advance of that, you can view some of the amazing shortlisted entries from Astronomy Photographer of the Year 2022…

Crossing the Madison by Jake Mosher

Crossing The Madison by Jake Mosher

This category is for landscape and cityscape images of twilight and the night sky featuring the Milky Way, star trails, meteor showers, comets, conjunctions, constellation rises, halos and noctilucent clouds alongside elements of earthly scenery.

Crossing the Madison by Jake Mosher shows the Milky Way arcs over Three Dollar Bridge, Madison River, Montana, USA in April 2021. The photographer drove 100 miles to watch the core of the Milky Way rise above the horizon a couple of hours before daylight.

This category is for photographs featuring auroral activity.

Electric Wizardry by Shane Turgeon shows the Northern Lights reflected in the still waters of a lake in Edmonton, Alberta, Canada. It was taken with a Canon EOS-1D X camera, a 14mm f/2.5 lens, 6-second exposure, ISO 1000.

This category is for photographs of the night sky including people or a human-interest element.

Yang Sutie’s image (above) shows the illuminated National Highway 219, the highest national highway in the world, snakes through the foreground, almost mirroring the majestic image of the Milky Way above. The two are separated by Kula Kangri, a mountain located in Shannan Prefecture, Tibet.

This category is for solar images, including transits and solar eclipses.

Simon Tang’s shortlisted image shows clouds of hydrogen gas give way as the magnetic field lines of the sun snap and clash together. This display of nature creates astonishing features, known as prominences, on the limb of the Sun. The location was Los Angeles, California, USA.

This category is for lunar images including occultation of planets and lunar eclipses.

The lunar surface, although it appears grey and monochrome, contains hidden colours within the soil, caused by different minerals. This colour is too faint to see with the naked eye, but digital images allow astrophotographers to enhance the colours and reveal a different view of the Moon. This image, by Noah Kujawski, is the inverted view of those colours, a unique perspective on our Moon.

This category is for images of everything else in our solar system, including planets and their satellites, comets, asteroids and other forms of zodiacal debris.

One of the astronomical highlights of 2021 was the discovery of Comet Leonard, a long period comet identified by G.J. Leonard on 3 January 2021. It made its closest pass by Earth on 12 December 2021 and was the brightest comet of the year.

Almost a quarter of submissions to the Planets, Comets and Asteroids category focused on this single comet, including a spectacular image captured in Hakos, Khomas, Namibia by Lionel Majzik.

The photographer secured some time with the robotic telescope at the Skygems Remote Observatories in Namibia on 27 December to capture this rare glimpse of a comet that will leave the Solar System and not be seen again.

Majzik explained, ‘photography was hampered by overcast weather conditions, but I was delighted to capture the incredibly spectacular Comet Leonard with its tail.’

The Crescent Nebula by Bray Falls

This category is for images of deep space objects within the Milky Way galaxy, including stars, star clusters, supernova remnants, nebulae and other intergalactic phenomena.

Bray Falls’s image is a deep view of the Crescent Nebula in Cygnus, the result of shockwaves originating from the Wolf–Rayet star WR 134.

This is a bicolour narrowband image with RGB stars. The nebula details were created from a false bi-colour narrowband combination of H-alpha and OIII, and the star colours were added from a natural RGB image. All exposures were captured with a high frequency AO guider at very high resolution (0.2″/pixel), requiring great seeing.

This category is for images of deep space objects beyond the Milky Way galaxy, including galaxies, galaxy clusters, and stellar associations.

Nicolas-Louis de Lacaille first observed what later became known as the Southern Pinwheel Galaxy on 23 February 1752 from the Cape of Good Hope, South Africa. This image, taken exactly 270 years later, combines a deep set of H-alpha exposures along with colour data to highlight the ruby-like star-forming regions of this beautiful barred spiral galaxy.

Young Astronomy Photographer of the Year

This category is open to pictures taken by budding astronomers under the age of 16-years-old.

The image above shows the nebula IC 1848 and its core, IC 1871. The Soul Nebula is an emission nebula located in Cassiopeia. In the east of the Soul star cloud there is a complex of nebulae and star clusters known as the Heart Nebula (IC 1805) of nebula and star cluster. Together they are often referred to the ‘Heart and Soul’.

This prize is for Best Newcomer for photos taken by people who have taken up the hobby in the last year and have not entered an image into the competition before. The judges will give special consideration to those using simple and inexpensive start-out kits.

Radio Telescope by Liu Xuemei shows the Mingantu Astronomical Observatory in the Inner Mongolia Autonomous Region of China. It is mainly used observe the Sun and is shown here silhouetted against a starry night sky.

This prize is for image innovation using images processed by the entrants using pre-existing open-source data.

This image depicts the busy surface and coronal activity of the Sun at 22:08 Universal Time on 15 February 2022. A powerful Coronal Mass Ejection (CME), shown in deep red in the upper left corner, erupted on the far side. Intriguing formations of plumes (in blue), coronal holes (in dark teal) and filaments (brown) are also represented.

To capture all this activity in one image, it was necessary to combine observations in multiple wavelengths in the extreme ultraviolet.

The winners of Royal Observatory Greenwich’s Astronomy Photographer of the Year 14 will be announced during an online award ceremony on 15 September 2022.

All the winning entrants will receive a one-year subscription to BBC Sky at Night Magazine.

The winning images will be displayed in an exhibition at the National Maritime Museum from Saturday 17 September, alongside a selection of exceptional shortlisted images. General admission will be £10.

The Royal Observatory Greenwich, in partnership with Collins, will publish Astronomy Photographer of the Year, Collection 11 on 29 September 2022.

It is the official publication for the Astronomy Photography of the Year competition and will showcase breath-taking images of space and the night sky from the 2022 competition shortlist.

Best lenses for Astrophotography in 2022

Best cameras for Astrophotography in 2022