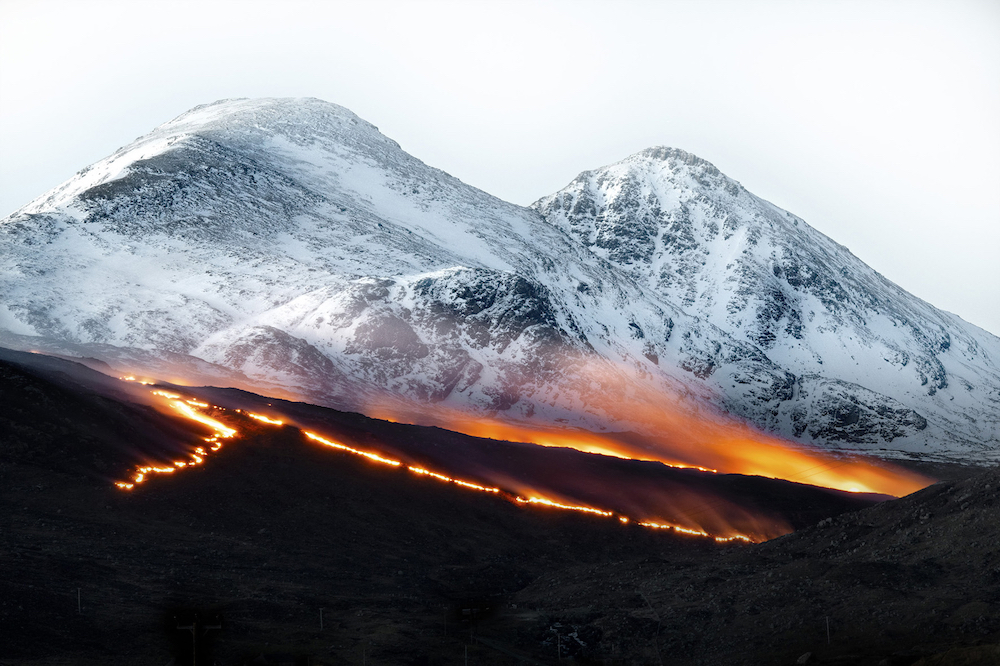 The Scottish Nature Photographer of the Year 2021 is landscape photographer Darren Cole, whose winning image shows a dramatic scene of a muirburn fire below snow-covered peaks near his home on the Isle of Harris.

The image, titled Ice and Fire, won the Environmental category before being chosen as the overall winner against stiff competition from a range of abstract, botanical, wildlife and landscape categories.

To view all of the category winners, and discover the stories behind their stunning images, just keeping reading below:

Scottish Nature Photographer of the Year 2021

Ice and Fire, Isle of Harris, the winning image in the Environmental and overall categories of the Scottish Nature Photography Awards 2021. © Darren Cole

Darren Cole, who has his own gallery, Hebscape, on the Isle of Harris said, ‘It was a real thrill to learn that I had won this year’s competition and I’m so grateful to the judges for choosing my image Ice and Fire, especially as it is the first time an image from the Environmental category has been chosen. As a seasoned landscape photographer, I’m used to spending hours walking on the beaches and mountainsides near my home, looking for that elusive, perfect shot. So it was with some irony that the scene from which Ice and Fire was created, appeared by chance on my doorstep.’

Cole explained, ‘Following reports of possible wildfires on the island and after several fire engines had raced past my house in north Harris, I opened the front door to be greeted by an Icelandic style scene of snowy mountains and raging fire. The juxtaposition of the dramatic white peaks and the red, rivers of fire below was truly spectacular and just begging to be photographed. With the snow-covered mountains reflecting what little daylight remained, the dark foreground allowed the fire to really pop, creating a stark and dramatic level of contrast in the scene. With the sky cloudless as well, there was little to detract from the almost Tolkienesque vista. A few days later, I discovered that the fire was started deliberately in order to burn the top layer of heather away allowing fresh vegetation to grow through, a process known as a muirburn.’

Competition judge Kit Martin said, ‘Ice and Fire is stunning. The competition was fierce in the Environmental category, but this stood out as a striking image telling a story without the need for words. It was unanimously decided on as the overall winner for its originality and visual impact. Muirburn is a controversial subject and one that is current and active, with passionate voices on both sides.’

Junior Nature Photographer of the Year 2021

The winner of the Junior Scottish Nature Photographer of the Year 2021 (under-18s) with Peregrine Playtime, is Kaitlyn Clark (11) from Inverness.

Kaitlyn previously won the title when she was just eight-years-old.

She said, ‘This was taken near Inverness on a day out with my dad. We were super lucky to have a family of peregrines feeling comfortable enough near us that they started playing and practising for life – this picture I believe to be two youngsters playing with each other. It took me a bajillion attempts to catch anything like this, never mind keeping it in frame with such a big lens.’

Competition judge Rebecca Nason said, ’11-year-old Kaitlyn’s image of two immature peregrine falcons, jostling in mid-air was a wonderful entry, and a clear first place for the judges in the Junior category. Seeing such interesting, wild Scottish natural history behaviour is exciting in itself, but to be able to capture this fast, aerial playtime so expertly is quite another and Kaitlyn has clearly shown excellent technical photographic skill here to produce a high quality, well exposed, pin-sharp image. A special image of a very special Scottish species, and one I would have been delighted to have taken. An inspiring shot from a young budding wildlife photographer.’

Student Nature Photographer of the Year 2021

Student Scottish Nature Photographer of the Year 2021 is Murronrose Dunn, who is a final year HND Photography student at New College, Lanarkshire.

Her portfolio of three images on the theme of motion, Passing Time, focuses on freezing the motion of water in three landscape locations, across a noon to dusk timeframe.

Murronrose Dunn explained, ‘The three images were shot during the restrictions last year, where the furthest I could travel was Glencoe. Landscapes were initially required for my course, however I enjoyed taking each image. They were also a moment to just connect with nature and step back from the world. Each image focuses heavily on water and freezing the motion to create a smoothed out milky effect. The series also goes from daylight to sunset, I wanted each image to look unique but as a set show the change from noon to dusk. The effect that the time of day had on each image is incredible, from the clouds preparing to burst in Glencoe to the cold blue sky in New Lanark.’

Competition judge Niall Irvine said, ‘Murronrose’s portfolio shows three very well considered images in different light conditions. They are fine examples of landscape photography. The successful use of long exposures in all three has given us a cohesive portfolio and a sense of motion in the water. Murronrose met the brief in every aspect – one to watch in the future.’

James Dewar explained, ‘Blue Hour Shells was taken at Ruby Bay at Elie on the Fife coast. It combines some of the textures and marine life on the shoreline in this multiple exposure shot. It was a huge surprise when I got the call letting me know I had won the Natural Abstract category of the Scottish Nature Photography Awards 2021. I’d just like to say thank you to the judges and organisers for all the time and effort they put in to running the competition and for choosing my image which means a lot.’

John Macfarlane revealed, ‘This was our first visit to Strathfarrar and the Glen Affric area, but we were not disappointed. The autumn colours were emerging strongly and trees berry laden. This detail of one wooded area caught my attention, both for the colours but also the rather abstract patterns of branch, leaf, berry and lichen beards. It was like a tapestry of nature.’

Graham Niven revealed, ‘My image, Cairngorm Squall, was taken on a wild February day towards the end of what was a long, cold spell of winter in 2021. Sub-zero temperatures and frequent snow had created wonderful conditions which we were very lucky to experience living in the Cairngorms during covid lockdowns. The photo captures Carn Eilrig momentarily appearing out of an ominous dark snowy squall, with the light peeking through to illuminate the scouring snow-filled winds. I photograph this mountain a lot; drawn towards its conical shape, and often dramatic setting rising up out of the Caledonian pine trees of the Rothiemurchus forest and backed by Braeriach, The Lairig Ghru and the Northern Corries of the Cairngorms. I am very pleased I was there to witness and capture the scene, which lasted no more than a few seconds, and even more so that it has been awarded, and can be enjoyed by many.’

Pete Stevens explained, ‘This area at Gourock is one of my go-to places for a quick trip out with the camera. It’s about five minutes from my house and there is always something happening on the river. In the summer the local yachts berth here and there is a calmness about the place but during the winter the weather dominates and the waves wash up and over the promenade and the paddling pools at high tide. On this afternoon, there was a strange purple glow in the sky caused by dust in the atmosphere. It lasted about 15 minutes and then it was gone as the next shower closed in but it provided a great contrast with the grey of the river water and the fences.’

Connor McLaren revealed, ‘This was worth standing out in the rain for hours after all! I’d never seen lightning like that before, so jumped at the chance to get out with the camera to try and capture it. I’d never photographed lightning so it was a bit of a learning curve but I was thrilled when I saw the screen on the back of the camera after such an impressive strike! It was a scary experience but amazing all the same!’

Sandy Gilmour said, ‘I’m delighted to win the Scottish Wildlife Behaviour category as it’s a side of wildlife I’m passionate about. The image was taken in a park in Glasgow, I saw the ducklings scurrying about chasing mayflies, expending loads of energy for what seemed to be a small return! I enjoy many photography genres including wildlife, studio, macro and landscape, but my first love is wildlife, in particular their behaviour. I get great satisfaction from capturing moments like this that are not always visible in a passing glance.’

Norman Watson explained, ‘Very occasionally the image you capture through the viewfinder makes your heart race – the subject, the light, the backdrop, all fall into place and the countless hours spent pay off. My two passions in life are nature and photography. The combination takes up all my free time and I’m always looking for a new way to capture nature with its endless possibilities. I could write a book about the vixen (Maj) who is the mother of the Fox Cub King. I’m delighted that such a beautiful animal has won and that I managed to be the photographer.’

He added, ‘The vixen I’ve known for six years or so and, in 2021, her den site was in a drain, under a nursery about to be demolished. The site foreman was a great guy and he made sure the five cubs had moved location before tearing down the building. With the ever-changing world around them, heavy machinery and noise, I thought she would move her cubs away, but no. She used the fenced-off site to her advantage and raised the cubs through the summer. One evening the mother wasn’t there and more piles of rubble made me uneasy in case something had happened. Sitting waiting I saw the cub come through the rubble and climb up to the top and stand tall. He was staring at his mum a hundred metres or so away heading his way. A very memorable encounter.’

The winning images and videos from the awards will form a touring exhibition that will run from October 2022 onwards.

The winning images and shortlisted entries will be published in a Portfolio Yearbook in the summer.

To find out more just go to the Scottish Nature Photography Awards website.

Getting close up with nature photography