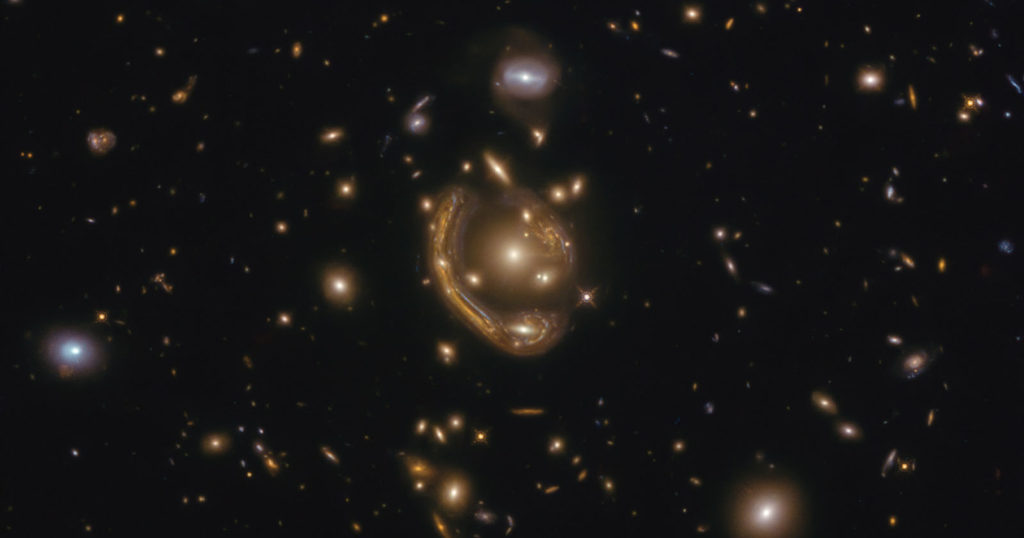 In December of last year, Hubble captured a photo of a distant galaxy that, thanks to gravitational lensing, appeared almost as a perfect “Einstein Ring.” A year later, astronomers revealed what they learned from examining the photo.

NASA dubbed the image a “molten ring” galaxy because of how it looks due to the effects of gravitational lensing. More accurately, the phenomenon shown in the image below is called an “Einstein ring.” An Einstein Ring is created when light from a galaxy, group of galaxies, or star passes by a massive object as it moves in line with Earth. Due to what is called gravitational lensing, the light is diverted thanks to gravity, which makes it seem as though it is coming from two different places. If the object, gravity, and observation device are perfectly aligned, the light appears as a ring.

Gravitational lensing is a phenomenon that allows astronomers to see vast distances without needing the large and complex hardware that would normally require it. PetaPixel has a detailed explanation of the process from a previous article, but in short, gravity distorts space in such a way that it makes an “optic” that channels light towards a telescope — in this case Hubble — and gives it the ability to see galaxies that are normally too far away to be studied with current technology and physical telescopes. NASA describes it as akin to looking through a giant magnifying glass.

When NASA originally released the photo of the galaxy — named GAL-CLUS-022058s — it described it as a strange and very rare phenomenon.

“GAL-CLUS-022058s is the largest and one of the most complete Einstein rings ever discovered in our universe. The object has been nicknamed by astronomers studying this Einstein ring as the ‘Molten Ring,’ which alludes to its appearance and host constellation,” NASA wrote.

Now, NASA has said that after examining the image and researching it further, astronomers were able to measure the galaxy’s distance from Earth as 9.4 billion light-years, placing the galaxy at the peak epoch of star formation in cosmic evolution.

“The extremely high rate of star formation in the brightest and very dusty early galaxies saw stars being born at a rate a thousand times faster than occurs within our own galaxy. This could help explain the rapid build-up of present day giant elliptical galaxies,” NASA explains.

Astronomers were able to calculate that the galaxy’s light was magnified by a factor of 20.

“This magnification, boosted by mother nature, effectively made Hubble’s observing capability equivalent to that of a 48-meter-aperture (157 feet) telescope. The lensing effects also create multiple apparitions around the curved arc of the single background magnified galaxy,” NASA continues.

Astronomers precisely modeled the effects of the lensing on the galaxy’s image in order to derive its physical properties.

“Such a model could only be obtained with the Hubble imaging,” explained the lead investigator Anastasio Díaz-Sánchez of the Universidad Politécnica de Cartagena in Spain. “In particular, Hubble helped us to identify the four duplicated images and the stellar clumps of the lensed galaxy.”