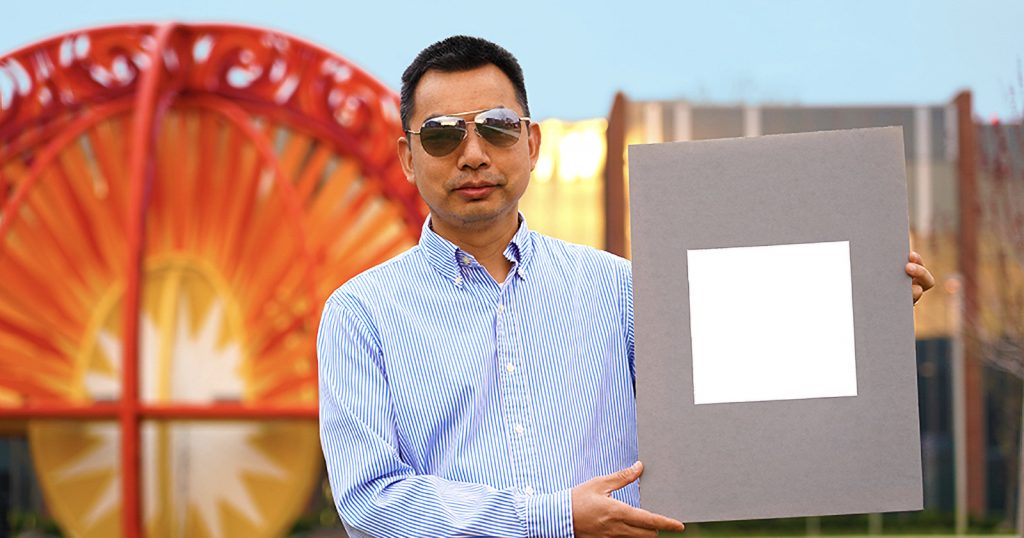 Researchers at Purdue University have unveiled what is being called the whitest paint on record, which can reflect up to 98% of light. The paint uses the same chemical compound found in a type of photo paper that has been used by photographers for over a century.

The paint was developed as a way to reduce power consumption for cooling large buildings in the summer as its 98% reflectivity is considerably higher than the 80-90% of light reflected by commonly available white paint on the market. It’s even able to reflect infra-red heat, which makes it particularly suitable for this purpose. As reported by The Art Newspaper, it has already shown to reduce surface temperatures of buildings by 4.5 degrees Celcius (8.1 degrees Fahrenheit) below the ambient temperature.

Lead researcher Xiulin Ruan says that they were able to achieve this level of reflectivity due to a high concentration of a chemical compound called barium sulfate, which is used in some photo paper and cosmetics applications.

Barium sulfate photo paper is often referred to as baryta paper. As noted by WhiteWall, Baryta paper has been used by photography professionals for over 140 years.

“Traditional photo papers are made of a coated polyethylene, which makes processing them easier and quicker,” WhiteWall writes. “The key difference of baryta paper lies in the barium sulfate (the so-called “baryta”) coating. Ultra-white with a neutral image color, the paper is outstanding at combining brilliant white with intense black tones.”

Ruan has already been in contact with an art museum that wishes to display this new white paint next to the blackest material that has been created: VantaBlack. But unlike VantaBlack, which has been essentially privatized and copyrighted by the original creator, Ruan hopes to make this extremely white paint available to consumers and is working with a producer to distribute it within the next one to two years.

If barium sulfate paper is effective in producing better photos due to increasing the perceived levels of contrast, it stands to reason that using this ultra-white paint during the capture process, such as on a cyclorama wall, would also be beneficial. Given that the paint will be available to purchase soon, it will be interesting to see if studios or independent photographers can make use of the highly reflective paint in creative ways, just as has been the case with VantaBlack.