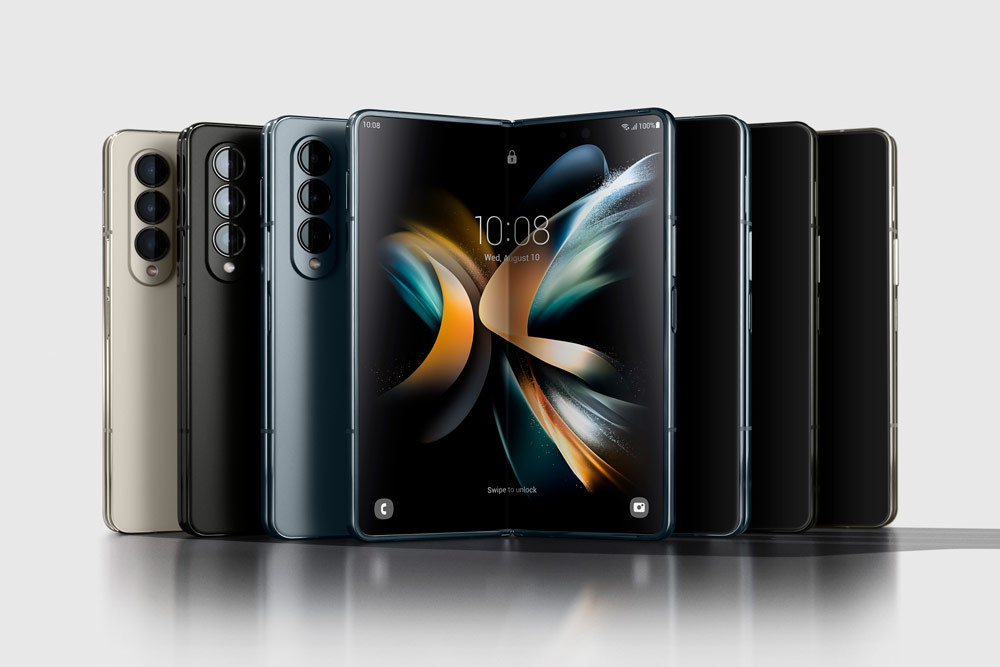 This compact clamshell smartphone allows users to shoot hands-free video or capture full group selfies at 75° and 115° angles. Selfies can also be captured from the Cover Screen by leveraging the main camera with the upgraded Quick Shot mode. The device design makes it possible to start high quality video recording in Quick Shot mode and then seamlessly switch to Flex mode to continue recording, hands-free without stopping the video. That means less awkward editing for vloggers.

Galaxy Flip4 Smartphone – its Cover Screen can be personalised with images, GIFs, video or a clock interface

Upgrading on features from the Galaxy Z Flip3, the camera on this new device now includes a 65% brighter Snapdragon® 8+ Gen 1 Mobile Platform Sensor.

Without having to open the phone, it’s possible to carry out several tasks from the cover screen including calls and texts.

Battery life has improved too. An expanded 3,700mAh battery and Super Fast Charging will allow a charge of up to 50 percent in a speedy 30 minutes.

Photographers can completely change the look of the device as the Cover Screen can be personalised to display favourite images as well as various clock designs, GIFs and video.

The first ever device to ship with Android 12L, the Galaxy Z Fold4 can be controlled with swipe gestures.

With an upgraded 50 megapixel wide lens as well as a 3x Optical and 30x digital zoom, the sensor now performs with 23% increased brightness in comparison to the Galaxy Z Fold3.

Both handsets are built with water resistant bodies. An accidental drop in the toilet or bath wouldn’t be a problem as they’ve both been tested for submersion in up to 1.5 metres of fresh water for up to 30 minutes.

Both smartphones are now available for pre-order and will be released from 26th August.

Customers are also welcome to have a hands-on look at the devices at Samsung’s Unpacked experience space at 55 Regent Street, London from now until the 31st August 2022.

How to take great macro photos on a smartphone

How to take amazing portraits on a smartphone