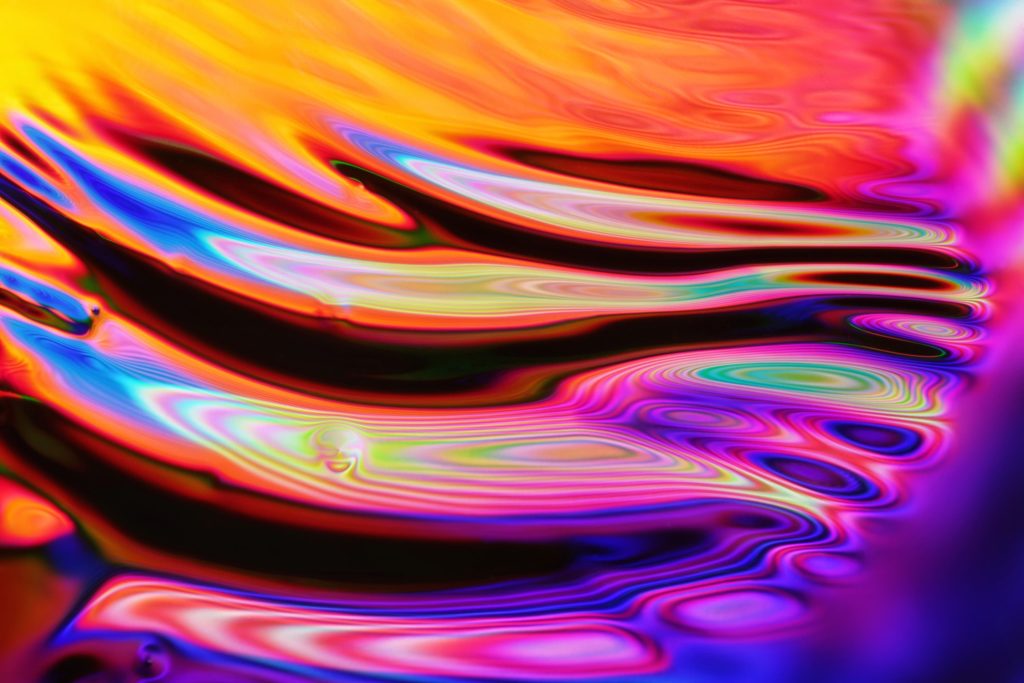 “My creative work helps me to express my inner feelings,” says Yekaterinburg-based Russian graphic designer and visual artist Ruslan Khasanov. Creative experimentation comes naturally to this Cannes Lions Gold winner (2018). He spotted a rainbow pattern in a discarded CD one day, and that inspired him to create his ‘Burn’ series of images, a part of his larger Disctortion project

Storage mediums, especially those that are used for audio and video media, tend to become collectibles. My father has a massive collection of audio cassettes from the 70s to the 90s. I have a fair amount of audio CDs and an above-average collection of BluRay steelbooks (if you’re a movie buff, you can get addicted to these). These days NFTs are all the rage with insane amounts of money being spent on their acquisition. Ruslan’s work involves a lot of bright colors and designs and liquids. For his Burn series, he wanted to create an abstract look with compact discs. By burning, deforming, and dipping them in bleach, he prepped a bunch of CDs before photographing them up close with a macro lens.

Ruslan Khasanov: I specialize in abstract photography, abstract music videos, and experimental typography.
I started my career in 2007 with logo designing and drawing illustrations. I’ve dedicated a lot of time to studying various software and artistic techniques. While drawing illustrations, I tried to find my own unique style. I loved to experiment combining vector graphics with 3D. But one day, I got tired of working at the computer and focused my attention on photography.

The Phoblographer: How did you come up with the idea for this project? Was it just something that came out of a lot of unused CDs lying around?

Ruslan Khasanov: I was walking around the city one day when I noticed a glint of sunlight reflecting off a damaged CD lying on the road, which was shimmering with all the colors of the rainbow. And this inspired me to create a series of abstract photos, videos and typography using CDs.

The Phoblographer: Most projects involving CDs that I’ve seen are macro photos where people photograph droplets of water or oil on their surface. Why did you decide to shoot these differently?

Ruslan Khasanov: As soon as I had this idea, I immediately began to check the information about whether someone had similar ideas before. I found a lot of photos of CDs, but no one else had anything similar to my idea. If someone has already made this idea before me, then I leave it and look for a new idea because I see no reason for myself to follow in someone’s footsteps.

The Phoblographer: The process of ripping apart the CDs sounds painful. Is this you letting out some repressed emotions?

Ruslan Khasanov: Yes, my creative work helps me to express my inner feelings. I just turn on the music, forget about everything that worries me and go with the flow, experimenting with graphics.

The Phoblographer: These disks appear to float in some of these images. Tell our readers how you achieve this effect, please.

Ruslan Khasanov: In the process of shooting, there are a lot of technical subtleties. Many visual effects I get by playing the lighting.

The Phoblographer: What techniques do you use to light the discs evenly? How tough is it to photograph them when having to deal with the reflections?

Ruslan Khasanov: I don’t have a lighting scheme; I always set up my equipment differently during shooting. Sometimes I shoot in direct sunlight. In creativity, I’m acting on a hunch.

The Phoblographer: Do you think CDs will experience a resurgence in usage in some years, much like 35mm film is undergoing? Or is it clearly on the way out as a storage medium?

Ruslan Khasanov: I would compare 35mm film to vinyl, you know. To me, they have similar aesthetics and charm.
I don’t see that CDs would be in demand in the future; this is dead-end technology. I see it only as a collectable. But I love the ritual that precedes listening to music: you take a CD out of the plastic case with the booklet, gently hold it by the edges, blow off dust particles from the mirror surface, insert it into CD player and enjoy the music. At such moments you don’t think about technologies; it’s more about nostalgia and meditation.

The Phoblographer: What’s the most amusing thing that you’ve learnt about CDs while working on this project?

Ruslan Khasanov: I learned about such a thing as “Rainbow Books”. I didn’t know there were so many different standards for CDs. In my experiments, different CDs produce different results.

The Phoblographer: Do you have a personal favourite CD?

Ruslan Khasanov: Treasures from my childhood: «The Slim Shady LP», «The Marshall Mathers LP», and «The Eminem Show».

I’m a huge Eminem fan since 2000. I grew up in a small Siberian town, and it was difficult to get original CDs without Russian localization on the covers and booklets; by some miracle, I succeeded.

The Phoblographer: What has the feedback been like for this project? What’s next on the Burn / Disctortion series for Ruslan?

Ruslan Khasanov: Today I think I have completed this series. I squeezed the maximum out of this experiment that I could. But if there is a new idea, then there will be a new project.