Roland Kraemer Fell in Love With the Ocean While Photographing Waves 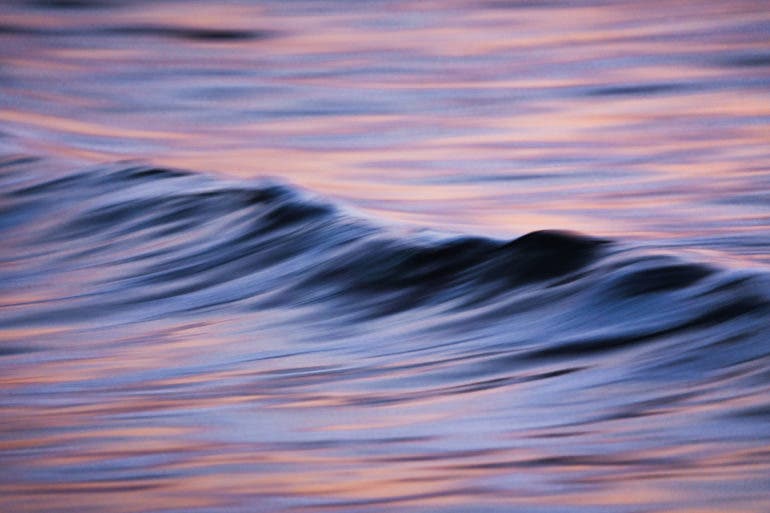 “I didn’t know how much I needed the ocean in my life and how calm I feel being close to it”, says Roland Kraemer. As someone raised in southern Germany, Roland was more of a mountain person who loved the chill of the high altitude air against his face. A road trip to the beaches of France changed this attitude completely, and he found himself being drawn to the sea on an almost daily basis for five weeks.

Much like Roland used to be, I am someone who still prefers the mountains over the beach. This doesn’t just have to do with the fact that I hate sand between my toes. It stems from growing up in a city surrounded by a large desert, with a constant yearning for an escape to cooler winters in the mountains. That’s not to say that I don’t occasionally enjoy watching the waves on the seashore. Most images of waves that I’ve seen have been of larger, seemingly gigantic waves – frozen to look solid and glassy. Until now, waves never struck me as being smooth and poetic the way Roland has portrayed them in this series. I will certainly look at them in a different light the next time I can be coaxed to make a trip to the sea.

“For the production of the series called ‘Motion’ I mainly used a 100-400mm high focal length lens. Using a lens like this enabled me to get really close to the waves and capture the intimate motion of the crushing waves. Every image has been shot with the Sony a7iii and the sigma 100-400”

The Phoblographer: Tell us how you got into photography and the kind of photos you enjoy taking the most.

Roland Kraemer: About seven years ago, after finishing school, I did an internship at a film production company where I received a camera as a farewell gift. At first, I wanted to sell the camera and even put it up on eBay. (Luckily) I didn’t find a buyer for the camera, so I decided to give photography a go and took it with me on occasional trips out in nature. I’ve always been an outdoorsy person and enjoyed spending time in nature. On the mountain. In the forest. Close to the shore. It was a natural process for me to also start my photographic adventure with landscapes.

To this day, I have a strong love for photographing details of nature with a special admiration for interesting geological formations.

The Phoblographer: Please elaborate on the gear you used for this project and how it helped you achieve your vision.

Roland Kraemer: For the production of the series called “Motion”, I mainly used a 100-400mm high focal length lens. Using a lens like this enabled me to get really close to the waves and capture the intimate motion of the crushing waves.

The Phoblographer: Telephoto zoom lenses aren’t the first choice for photographers who shoot landscapes. Give us an idea why landscape photographers should have one of these in their kits.

When shooting with a telephoto lens, you really need to think more about the framing and the composition of the image. Every little movement and tilt of the camera has a huge impact on the final outcome. This results in a more vivid and thoughtful process of shooting that I really enjoy.

The Phoblographer: How did the idea for such a series come about? What led you to pick the ocean as the main subject?

Roland Kraemer: I am not much of a person that sits on the desk and writes down concepts for photo projects. My ideas come from just being outside and shooting different landscapes on my travels. They are mainly coming up by recognizing patterns and themes in a collection of photographs I have taken of a region or a place.

The last five weeks of last year’s summer road trip through Europe, I spent surfing on the Atlantic coastline of France. Besides surfing, I spent several hours a day photographing waves. During this time, I developed a deep relationship [with] the ocean, which ended up resulting in the project called “Motion“.

The Phoblographer: These images have a painterly, brushstroke sort of feel to them. What were the main emotions and feelings you’re trying to convey with this series?

Roland Kraemer: Through the slow shutter and camera movement blur, I wanted to convey the motion and the movement of the breaking waves. Furthermore, I felt a sense of freedom and calmness while shooting these images that I hope these images transport in a way.

The Phoblographer: Why the lack of a human or marine subject in these? Wouldn’t that have added to the sense of solitude that I see in the pictures?

Roland Kraemer: I had no intention to not include human or marine subjects in these photos. The images are simply the result of an organic and free-flowing approach of shooting. While curating the final selection of this series, I quickly realized that this series should just focus on waves and their movement/motion without any additional subjects or landscapes.

The Phoblographer: Where did you stand to get these shots? What influenced these choices?

The Phoblographer: What times of the day did you find were the most suited to capture waves with colours such as these?

Roland Kraemer: The best times I have found were during times of soft light. During sunrise, sunset and overcast days. The water basically acts as a mirror of the sky. If you want to achieve an orange or pastel-coloured look, you’d have to shoot during sunrise/sunset. If you’d like to go for a blueish look, it makes sense to shoot during an overcast day.

Another important aspect is the wind. You don’t want the wind to be too wild, coming from different directions and creating crazy waves. You’d want to have soft but solid winds that create beautiful breaking waves with a clear movement, as it’s the easiest to track and match with the movement of the camera.

The Phoblographer: You visited the beach almost every day for five weeks. What was the biggest takeaway for you from this?

Roland Kraemer: I didn’t know how much I needed the ocean in my life and how calm I feel being close to it. Shooting the ocean, observing the movement of the water and being present in the moment have been a daily form of meditation for me during those five weeks. I learned to love the ocean.

The Phoblographer: As someone who prefers mountains over oceans, what drew you to the ocean so often during the course of this series?

Roland Kraemer: I have never used the technique of combining camera movement with a slow shutter and subject movement before creating this project. I instantly fell in love with how the images looked on the screen of my camera, and I kind of got addicted to shooting this kind of style. I had immense fun shooting this project – I haven’t lost a thought on the mountains during this time period.

The Phoblographer: For the most part, I get a sense of calm while viewing these, but the sea can be rather powerful as well. Were there any moments you captured that showcase this too?

Roland Kraemer: During the time of the production of ‘Motion‘, I experienced quite a few harsh and stormy days. Stormy to the point that you could barely keep standing on your feet as the wind got too powerful. I didn’t necessarily take photos during these weather situations as the swell was too heavy and created too much foam. I didn’t like the look of these images and much more preferred the ones from not-so-stormy days. Generally speaking, it was really hard to shoot during stormy weather situations as the wind whirled up the sand, and I had to be careful with my camera equipment.

The Phoblographer: How did you ensure your gear remained safe from the seawater and salty air?

Roland Kraemer: I was as cautious as possible – especially when standing in the water and shooting. I tried to anticipate the wave movement and was holding the camera above my head whenever the wave crushed against my feet and the water splashed in the air. Another important safety aspect is to keep your camera and lenses safe from the sand of the beach. A camera bag that’s water- and sand-proof helps immensely to keep your camera clean and safe. 🙂

The Phoblographer: As photographers, what can we do to highlight the risks that oceans face with the rising global temperatures?

Roland Kraemer: We have to speak up, use our voice and our platforms, share our knowledge, educate others, sign petitions and minimize our own carbon footprint as much as possible. <3

All images by Roland Kraemer. Used with permission. Take a look at his website, Instagram and Behance pages to see more of his work.

This Galaxy is 10 Billion Light Years Away, Visible Through a Cosmic Lens

The Toyko Olympics Kicked Off With an Impressive Aerial Drone Display

Drone Pilot Spots and Saves Man Being Attacked by Shark