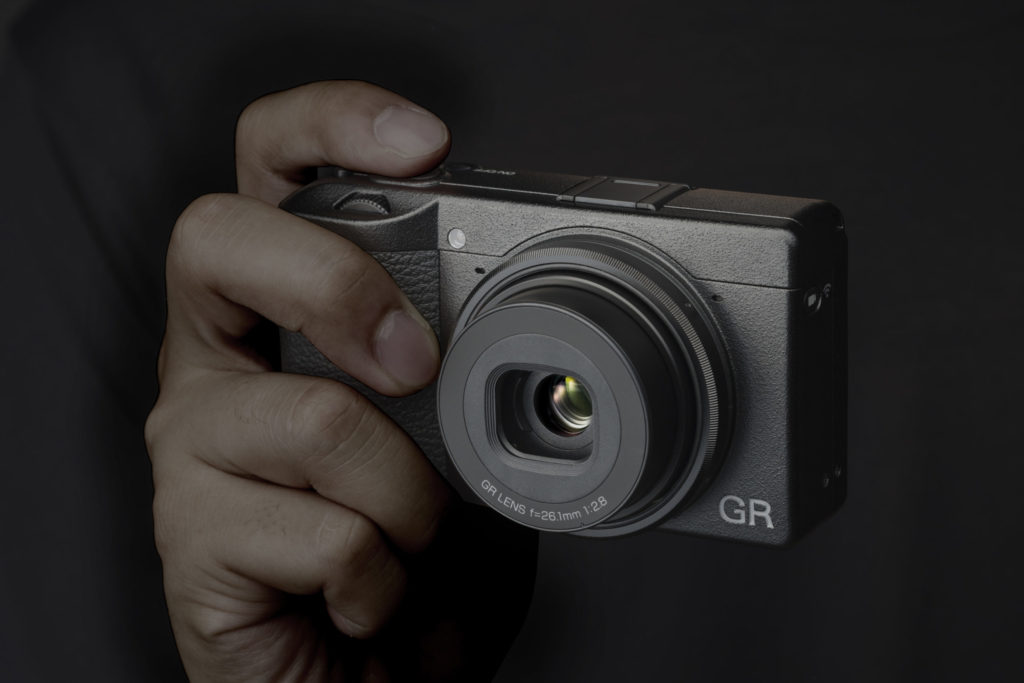 Ricoh Imaging has announced the new Ricoh GR IIIx, a version of the Ricoh GR III, but with a new 26.1mm f/2.8, 40mm equivalent lens (in 35mm terms). The new 24mp camera features in-body image stabilisation, and is designed to give a perspective “close to the photographer’s own effective field of view”.

The newly developed lens features a built-in 2-stop ND filter, 9 aperture blades for smooth bokeh, a 12cm close focus distance for macro shots, and retracts into the camera body when switched off to keep the camera pocketable.

In-camera image editing has been improved over the original Ricoh GR III, and the compact camera features eye and face detection AF. Wi-Fi and Bluetooth is built-in so you can remotely control the camera, as well as transfer images. Video recording is available at Full HD resolution, and 60fps.

An optional optical viewfinder is available, as well as a teleconverter which gives the camera a 75mm equivalent. The Ricoh GR IIIx will be available for £899 / €999.

Also announced is that that the Ricoh GR III will be getting a firmware update which will add some of the new features that the GR IIIx has, including:

From Ricoh: TOKYO, September 8, 2021 – RICOH IMAGING COMPANY, LTD. is pleased to announce the launch of the RICOH GR IIIx. This high-end digital compact camera features a newly developed GR lens with a 40mm angle of view in the 35mm format, while harmonizing professional-grade image quality with a compact, lightweight body perfect for street photography.

The RICOH GR IIIx has been developed in response to user requests for a new GR-series camera that will add a new perspective to the highly acclaimed RICOH GR III. The GR III was released in March 2019, featuring a 28mm wide-angle lens and designed to further enhance the essential values of the GR-series: optimizing image quality, snapshot capabilities and portability. The newly designed 26.1mm GR lens provides a 40mm angle of view in the 35mm format, close to the photographer’s own effective field of view. Depending on the way the lens is used, this versatile angle of view can create different image renditions: you can capture an image similar to those taken at a 30mm semi-wide angle, or create a completely different visual expression as if taken at a 50mm standard angle. The camera also provides a range of new and upgraded post-shooting functions to edit captured images to the photographer’s preference.

The new RICOH GR IIIx is a camera that harmonizes all the benefits of the ever-evolving RICOH GR series with a new, innovative perspective perfect for dramatic, inspiring street photography.

The RICOH GR IIIx incorporates a newly developed 26.1mm F2.8 GR lens, which harmonizes exceptional image quality with a slim design. Unlike past GR-series models which featured a 28mm wide angle of view for exaggerated perspective, this lens provides a 40mm standard angle of view in the 35mm format, delivering images with a more natural perspective and a more truthful sense of depth for a completely different type of street photography.

The newly designed optics incorporates two aspherical optical elements at most effective positions to reduce distortion and chromatic aberration to a minimum, while effectively minimizing the generation of flare and ghost images when shooting against backlight.

In macro photography, the camera allows the user to move in on a subject to as close as 12 centimeters from the lens front end. Coupled with the standard focal length, it captures close-up images with a natural perspective, set against a beautifully defocused background.

It also comes equipped with an ND (Neutral Density) filter, which closes the aperture down by two stops to capture high-contrast, high-resolution images with a variety of scenes and subjects and under varying shooting conditions. Its nine-blade diaphragm mechanism creates a natural bokeh (defocus) effect and a truthful sense of depth at open and larger apertures, while capturing beautiful light beams at closed-down apertures.

The GR IIIx features a hybrid AF system combining a contrast-type AF mechanism superior in focusing precision with a phase-detection-type AF mechanism assuring high-speed focusing operation. During autofocus shooting, this AF system detects the subject’s face or eye with precision,* focuses on it, and indicates the in-focus position on the LCD display using the AF frame. When the camera detects multiple faces, it automatically distinguishes the main subject from secondary ones and indicates this on the focus frame. Photographers can also change the main subject with simple touch-screen operation.

* A firmware upgrade for the RICOH GR III will be provided soon. GR III users are advised to update the camera’s firmware to use this function.

* Measured in conformity with CIPA standards.

* This function is available at shutter speeds slower than 1/1000 second.

Despite the incorporation of the large APS-C-format image sensor and the newly developed optics with a longer focal length, the GR IIIx is designed to be extremely compact, functional and portable, in keeping with the GR-series concept of the camera as a pocketable imaging tool or a handy picture-taking tool. It also provides a host of user-friendly features — such as a short start-up time of approximately 0.8 seconds, control dials conveniently positioned next to the four-way controller, and effortless touch-screen operation — to enhance operability and allow the user to swiftly react to once-in-a-lifetime shutter opportunities. The exterior frame is made of highly rigid magnesium alloy to improve dependability and durability while being carried or stored.

The GR IIIx features a 3.0-inch high-definition LCD monitor with approximately 1,037,000 dots. Its touch-screen operation provides swift, intuitive control of various camera functions, such as AF frame shift, menu selection, and image advance/magnification during playback. It also features an air gapless construction, in which special resin is inserted between the LCD touchscreen monitor and a protective cover made of reinforced glass, to effectively reduce the reflection and dispersion of light for improved visibility. The Outdoor View Setting allows the user to instantly adjust the monitor’s brightness to the desired level for greater visibility in difficult lighting conditions.

The GR IIIx features a creative Image Control function, which integrates effect modes into conventional image setting operations. Using 11 basic Image Control modes, the user can easily adjust various parameters, such as saturation, hue, key, contrast and graininess, to the desired level and create their preferred finishing touch. A set of adjusted parameters can be added as a custom setting to the Image Control function menu.

The GR IIIx provides in-body RAW-data development, while allowing the user to edit a captured image as desired by adjusting such parameters as recoding size, aspect ratio, white balance, Image Control setting, and exposure compensation factor, all without the need of a PC. Since the camera reduces the time required for preview after the user adjusts the parameters of RAW-format images, it enhances the speed of in-body RAW-data development. The camera also lets the user retain the adjusted parameters after the initial RAW-data development is completed, making it possible to make minute re-adjustment of the already-developed image with greater efficiency. The camera’s image quality adjustment function for JPEG images is also upgraded: a newly added monochrome mode allows more minute adjustment of parameters in full-color images, such as filter effect, toning, contrast and sharpness, to create monochrome images with the desired finishing touches. The camera also provides such creative tools as a choice of aspect ratio (16:9 or 4:3)* and image rotation in 0.1-degree steps* to facilitate the image editing process.

* A firmware upgrade for the RICOH GR III will be provided soon. GR III users are advised to update the camera’s firmware to use these tools.

* A firmware upgrade for the RICOH GR III will be provided soon. GR III users are advised to update the camera’s firmware to use this function.

* A firmware upgrade for the RICOH GR III will be provided soon. GR III users are advised to update the camera’s firmware to use this program.

** The GA-2 Lens Adapter — an optional accessory designed exclusively for the GR IIIx — is required to install this lens on the GR IIIx.

Designed for exclusive use with the RICOH GR IIIx, this tele conversion lens is mounted on the camera using the GA-2 Lens Adapter. When mounted, the camera automatically detects it as a tele conversion lens and extends the focal length to approximately 75mm in the 35mm format with the Crop mode, or to approximately 107mm in the secondary Crop mode.

Designed for exclusive use with the RICOH GR IIIx, this external optical viewfinder features a focus frame (1:1 aspect ratio; a picture guide mark provided) indicating an image field equivalent to the 40mm angle of view in the 35mm format. Carrying case included.

Exclusively designed for use with the RICOH GR IIIx, this accessory replaces the standard ring cap to upgrade the camera’s appearance, with a choice of three colors: Dark Gray, Black, and the new GR IIIx-exclusive Bronze.

This high-grade, genuine-leather camera case provides solid protection of the RICOH GR IIIx/GR III camera body. It features a belt loop on the back and a magnetic lock on the upper cover for quick removal of the camera in snapshot applications.

This high-grade, genuine-leather camera case protects the RICOH GR IIIx/GR III camera body when carrying it in a bag. When not in use, it can be folded for portability.