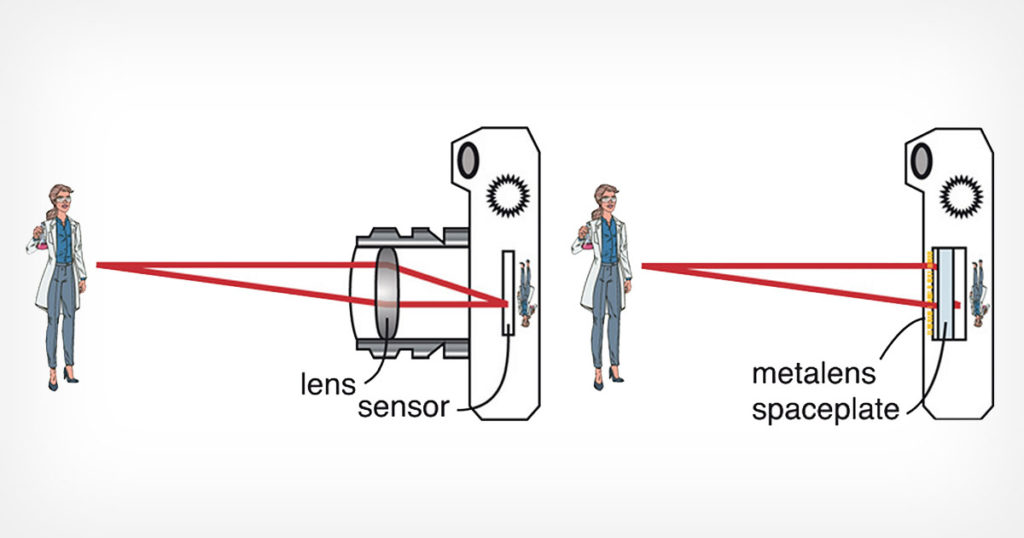 Researchers from the University of Ottawa have developed a concept that would reduce the size of lenses by a huge margin and effectively eliminate the size of modern optics if combined with a metalens. The team tackled not lens elements themselves, but instead the space between them.

The researchers explain that the last few centuries of optical work rely on perfecting and combining lenses to better control optical performance. Building on that, relatively new nanotechnology has allowed for the development of metalenses that have the capability to shrink down optics by a large degree.

But unaddressed in metalens development is the requirement for space between optical elements. No matter how small a lens can get, it still relies on space in order to produce images. That space will always be an obstacle for miniaturization unless it is addressed directly.

As described in the research paper’s abstract, the researchers pointedly address the issue of space by presenting the concept of and experimentally demonstrating an optical “spaceplate.”

“…an optic that effectively propagates light for a distance that can be considerably longer than the plate thickness. Such an optic would shrink future imaging systems, opening the possibility for ultra-thin monolithic cameras. More broadly, a spaceplate can be applied to miniaturize important devices that implicitly manipulate the spatial profile of light, for example, solar concentrators, collimators for light sources, integrated optical components, and spectrometers.”

The team, led by Dr. Orad Reshef — a senior postdoctoral fellow in the Robert Boyd Group — and Dr. Jeff Lundeen — Canada’s Research Chair in Quantum Photonics and Associate Professor in the Department of Physics at the University of Ottawa — spoke with Phys and explained that the team wanted to address how light spreads out between optical elements and tackle aspects of that process that lens elements can’t do anything about.

In an interview, Dr. Reshef says that light naturally spreads out when it travels, and every optical device currently used relies on that spread in order to work. As an example, he points to the large gap between the eyepiece and the objective lens in a telescope or a camera lens: both rely on that distance and spread in order to properly function.

But that gap, and other gaps in a lens’ design, takes up a lot of space, and his team developed what they call a “spaceplate” that is able to take that same spreading of light and compress it into a “counterpart” to the lens and allow whole imaging systems to get dramatically smaller as a result.

“We considered what would happen if you manipulated light based on the angle rather than the position of a light ray,” Dr. Lundeen said to Phys. “Lenses act via the position of the ray. Angle is a completely novel domain, and no one had shown that it could be used to make something particularly useful. We identified a useful application, compressing space. And then we showed that we could actually design and experimentally demonstrate plates that do exactly that.”

Dr. Reshef says that this development would theoretically allow lens makers to shrink down all manner of large devices that were before thought impossible to miniaturize.

“In order to design it, we need to come up with a new set of rules that is incompatible with that used in lens design. Nobody knows what they are, it’s like the wild west,” he says. “It’s surprising that optical elements like lenses have been around for a millennium and their design rules have been well understood for over 400 years, and yet we’re still discovering such fundamental new optical elements for imaging.”

The spaceplate could work in tandem with a metalens to significantly reduce the size of optics to the point where, in example graphics, the lens appears flush with a camera’s sensor.

The researchers say they are currently working on developing the next generation of the technology to increase the compression factor and improve overall performance.

“We already have some designs to increase the compression factor from five to over 100 times, and to increase the total transmission. To continue doing this, we need to come up with a completely new design paradigm,” Dr. Lundeen says.

While metalenses have threatened to completely eliminate the camera bump in modern smartphones, the spaceplate in combination with metalens technology has the potential to eliminate modern lenses entirely. It’s a possibly revolutionary development in the field of optical science, and the full research report can be read here.