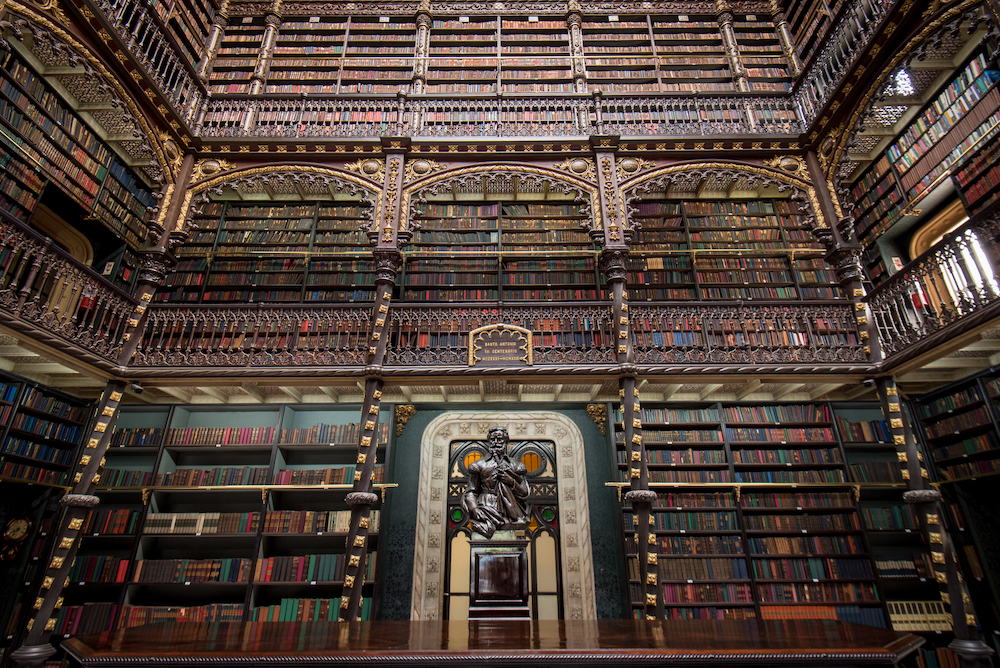 Wiki Loves Monuments (WLM) has revealed the winners of its 2021 Photo Contest with first place going to an image of the Royal Portuguese Cabinet of Reading in Rio de Janeiro, Brazil, shot by Donatas Dabravolskas.

It was the 12th edition of the awards with over 172,000 entries submitted by 4,914 uploaders from 37 different countries. Out of the entries there were 3,198 first time contributors.

Firstly, national winners were selected and their work was then brought to an international jury of experts.

The jury then assessed, considered and ranked the national winning photos based on the WLM Photo Contest’s three key criteria: usefulness for Wikipedia, technical quality and originality.

The Wiki Loves Monuments international photo contest is organised by Wikimedia, the movement behind Wikipedia – the free online encyclopaedia that’s authored by volunteers.

As part of the competition, photographers donate their images to Wikimedia Commons, the free repository that holds most of the images used on Wikipedia and the other Wikimedia projects, helping to document the world’s cultural wonders for future generations.

The contest was inspired by a successful 2010 pilot in The Netherlands, which resulted in 12,500 freely licensed images of monuments that can now be used in Wikipedia and by anybody for any purpose.

The project has thus far helped to collect information on 1.5 million monuments from 76 national competitions.

More than 1.7 million pictures have been submitted by over 60,000 participants, adding to the sum of human, and visual, knowledge that’s been gathered on Wikipedia.

The organisers commented, ‘With the events going on in the world, it is important to stay aware that there is a deadline to capture the world around you. We consider it our responsibility to make people aware of its beauty, and that it deserves to be shared through the eyes of the people that experience it every day. We make the commitment to create the visuals that can illustrate the stories of these places and bring them to life.’

Although Donatas Dabravolskas lives only 15 minutes away from the Royal Portuguese Cabinet of Reading in Rio de Janeiro, Brazil, he only came to know about the place from a social media post, which motivated him to visit it and take a bunch of photographs.

The jury members said the winning picture of Wiki Loves Monuments 2021 has, ‘amazing symmetry and conveys greatness and true scale of this immense library.’

A professional photographer who has been in the field for over a decade, Damian Pankowiec, believes that it is important to, ‘capture the subject at the right time of day and the weather.’

This stunning picture of Saint Roch chapel in Krasnobród, Poland, was praised by a jury member as the, ‘best way to help a modest, otherwise unspectacular monument in gaining value in a picture is looking for the proper season; and for this picture autumn was chosen very well.’

Another jury member said, ‘it creates the sensation of being there.’

Along with his friends, Zysko Serhi, travels around Ukraine to showcase the beauty of it to the world. Far from his home, Serhi captured a ‘colourful interior shot’ of Samchyky Palace in Starokostiantyniv, Ukraine.

Małgorzata Pawelczyk captured the Stefan Czarniecki Monument in Tykocin, Poland, as the ‘sun rays were shining through the clouds and the fog.’

Her motivation to submit this photograph to WLM was to, ‘create awareness of the beauty of architecture even in small towns.’

A jury member remarked on it as having, ‘great use of the weather and the time of day to isolate the subject within its surroundings.’

Basavaraj M, who has been into photography for about four decades with a special interest for architecture, presented the contest with the picture of the Gali Mantapa, from his hometown of Chitradurga in Karnataka, India. The photograph was also the winner of WLM 2021 in India.

A jury member remarked on the image as having a, ‘good combination of stone architecture with natural rocks.’

During the pandemic in 2020, Daniel Horowitz, along with his wife, ‘rented a secluded cabin near Lake Champlain in Vermont, hundreds of miles from home.’

Since his childhood, he has always been drawn to old buildings, ruins and abandoned places.

Towards the end of their trip, as he was taking pictures, Horowitz wandered off (as he usually does), to capture Fort Crown Point in New York.

It was a British fortress along the western bank of Lake Champlain, built in 1759 to defend against French forces and partially destroyed by fire in 1773.

The Dormition Cathedral was photographed on a ‘rare sunny winter day’ in Kharkiv, Ukraine, in ‘extreme cold and the snow on the roofs added some neatness to the whole scene’, by Ekaterina Polischuk. As well as being a landscape photographer she is also a drone pilot.

Of the image, a jury member remarked, ‘the tower in the foreground creates a dominant look and great perspective towards the depicted monument; lines are converging towards it and draws the eye into the shot. Excellent day for such an image; snow on top of the golden tower is like icing on the cake.’

On a weekend walk to Ross Castle with his family, Mark McGuire happened to perfectly capture ‘a series of fortunate events’ in one frame, rather than just the monument.

McGuire explained, ‘for the ducks, boat and sunset to all align at the same time was pure chance and one of these rare moments that is unlikely to be replicated.’

It was also a jury member’s favourite, ‘by its composition’ which blends, ‘architecture, nature and human elements.’

The Windmills of Nashtifan, Iran

On a cloudy day with strong winds, Hadi Dehghanpour, along with three photographer friends, travelled almost 400 kilometres to, ‘one of the unique and special attractions of Khorasan Razavi’, the Windmills of Nashtifan.

A jury member remarked that, ‘the middle of a frame adds to the magnitude of the structure.’

Yashin, who has been into photography for about seven years now, presented a beautiful image of Intercession Church, Posevkino, Voronezh Oblast, Russia.